It hasn't been an awesome week, all told. It's been a tough week of classes, the weather has been rain for days, and when the winds of winter blew a redoubtable NHK fee collector to my not-currently-paid-up door, only several tens of thousands of yen to be paid in large lump installments could induce her to take her leave.(1) My laptop's keyboard has given up the ghost after years of faithful service, forcing me to use a Japanese model whose layout is just different enough from the Western standard to be a serious pain in the butt. And to top it off, since Friday, I've had some kind of monstrous cold that honestly feels more like the kind of dread plague that used to suppress the premodern population.(2)

Which is the long way around to saying that really the only thing bloggable that's happened since my last update is that I made an unusually large grocery shopping trip. Which, since at least some of you might possibly want to know what I've been feeding myself with(3), forthwith I shall blog.


This is an unusually large haul for a guy who's effectively living out of a beer fridge and cooking for one to boot, but the new crop of rice is in, and as I've just run out(4) this week, I figured now was a good time to stock up for winter.

Anyway, how could I resist, considering the packaging on this stuff? (courtesy of the local Ōdate Farmer's Co-op)

On the vegetable end of things, there's a few things worthy of note:


Neither leeks or scallions per se, these are negi, ("onions", the ones we call "onions" being called tamanegi, "ball onions".), one of those ingredients that tastes just different enough from the substitutes you can get in America to be irritating.(5) Delicous wherever scallions with more flavor would suit, or grilled in sweet miso sauce. If only I didn't have to cut them in half to fit them in my fridge. 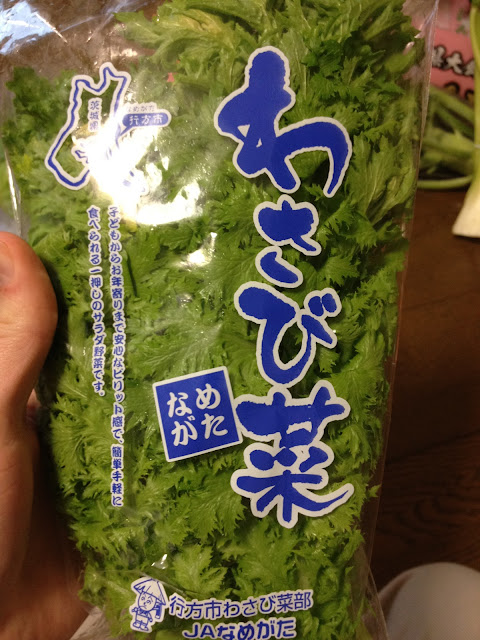 I've been steadily working my way through the wide variety of fresh cooking greens that are available up here-- there's way more than spinach, beet, and collard in the grocery stores, most of which I don't know what to do with with any degree of exactitude. These are peppery wasabi greens, which, based on an online recipe I translated, I have since cooked with mushrooms in a quick eggy cream sauce made of 1T mayonnaise, 1T broth, a splash of soy sauce, and a teaspoon of sesame paste (nerigoma, which I take to be the same as US tahini). 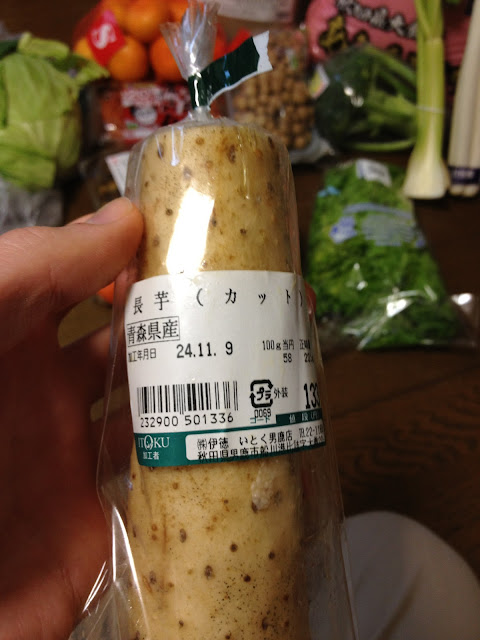 Nagaimo, a member of the wide class of unrelated Asian root vegetables that my dictionary translates unhelpfully as 'yams'. The grated starch, tororo, which has a color and texture to fling the inner 6th grader into a full-on giggle-fit, is dribbled on the top of a variety of cold noodle dishes and thickens authentic okonomiyaki recipes, which is how I intend to use it. 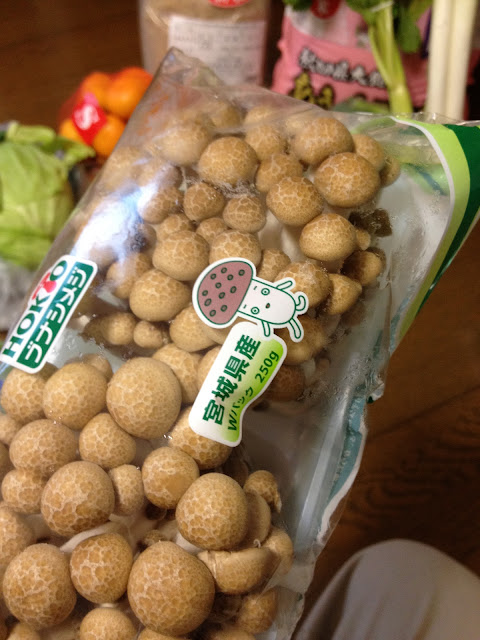 Hopefully there's nothing wrong with eating too many mushrooms, because I've gone a bit nuts lately and started eating a truckload of all the grocery store varieties you don't get a lot Stateside.  These are buna-shimeji, the mushrooms I paired the wasabi greens with. It turned out to be a winning combination, as cooked, they have a very pleasant, mild and meaty flavor that goes great with the spicy greens. These come in convenient individual pucks, still with a smidge of brown rice flour growth substrate clinging to the ends of their mycelia. 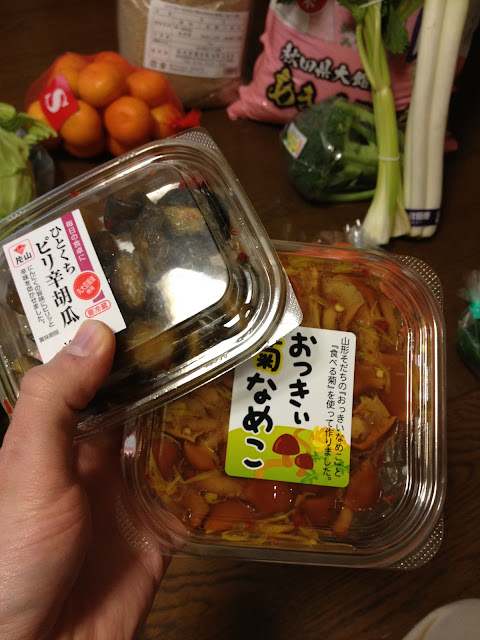 As winter comes on, and fresh fruit and veg gets more expensive, my self-imposed initiative to explore unknown corners of the grocery store has taken within its ambit the large number of pre-made Japanese pickles available for purchase.  One of the corners of the "traditional Japanese meal" anthropologists like to go on about, heavy consumption of pickles (these are hot salt-pickled cucumber and nameko, respectively) is rumored, along with Akita's high alcoholism rates, to contribute to an unusually high rate of stomach cancer around these parts. I guess I'll do my best to go easy on them. 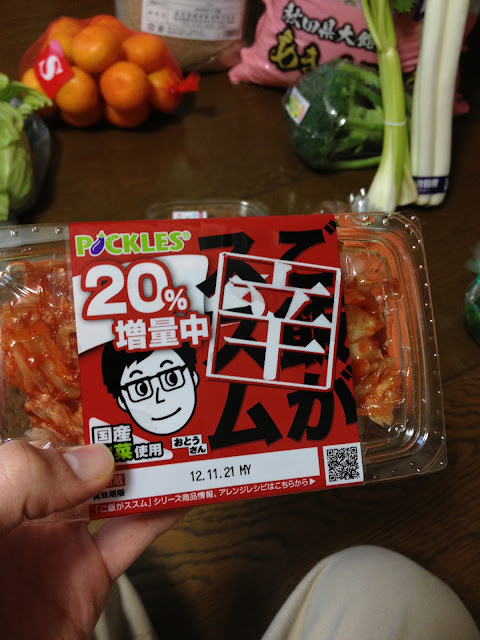 A relative newcomer to the Japanese pickle scene, but believe me when I say that there are more than enough varieties of kimchi (at least 20 brands) at any of the groceries you care to visit. The presence of Korean drama idols' tucked and Photoshopped faces on several brands suggest a possible reason for its popularity.  Of course, since most of the stuff is domestically produced in Japan, some modifications have been made for local taste: this stuff barely qualifies as peppery sauerkraut, despite the huge character (on right) reading <HOT!> 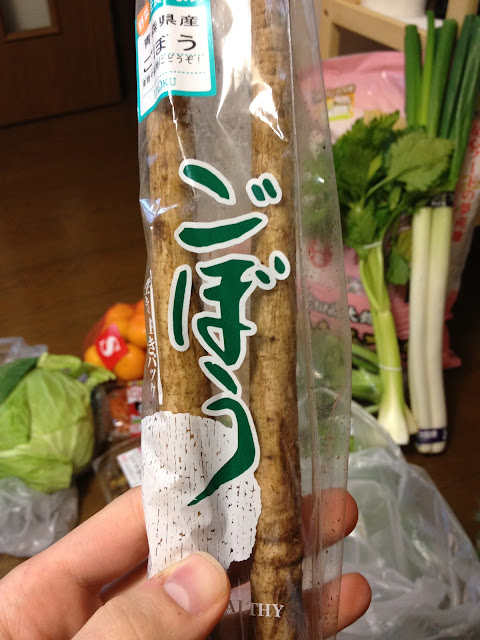 Last in the "vegetables not to be found in the US" category is this nice big package of gobō, or burdock root. A member of that exclusive class of vegetables whose appearance makes you scratch your head as to why or how anyone would ever give it a try(7), gobō is in fact, extremely delicious-- it has a delicious deep brown earthy kind of flavor that goes ludicrously well in stews and stir-fries-- the most famous being kinpira-gobō, which is what I made as soon as I got this stuff home.  For those of you who can actually find this stuff (try a Korean grocery and look for the stuff sold as "u-eong"?) an informal recipe and steps follow.

Opinions vary on whether or not it's necessary, exactly, to peel gobō prior to slicing-- since I don't have a garbage disposal, I'm more than happy to go after it with the scrubby side of a sponge to remove lingering dirt and the outermost layers of the bark. Since they're too long for my fridge, I figured I might as well do both of the roots at once. 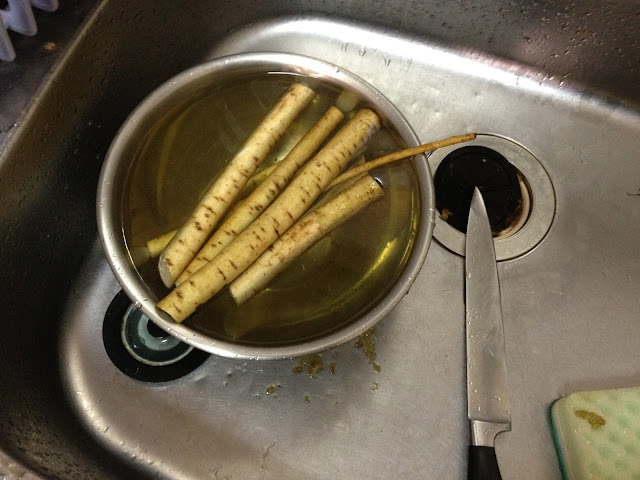 Both to keep the stuff from oxidizing (enzymes in the flesh will turn the whole works black on exposure to air) and to draw out bitterness(8), I chopped the roots up a bit and got them in a bowl of water. 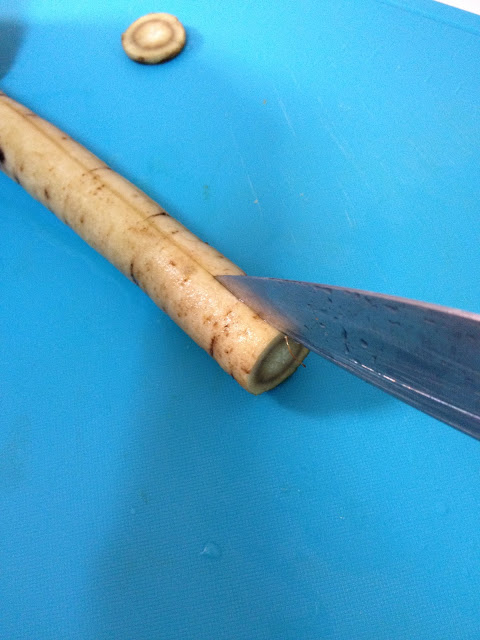 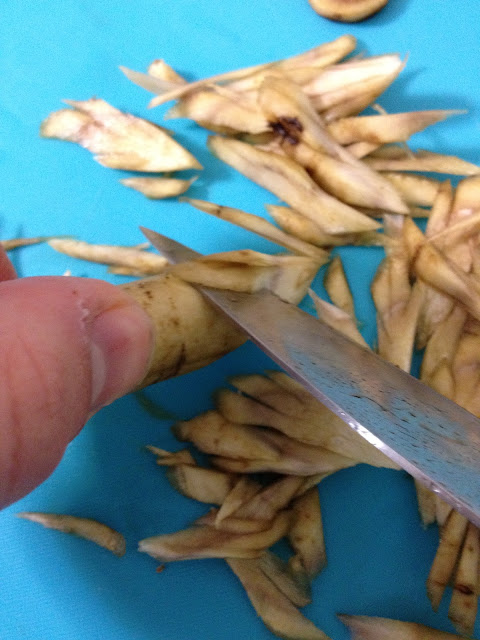 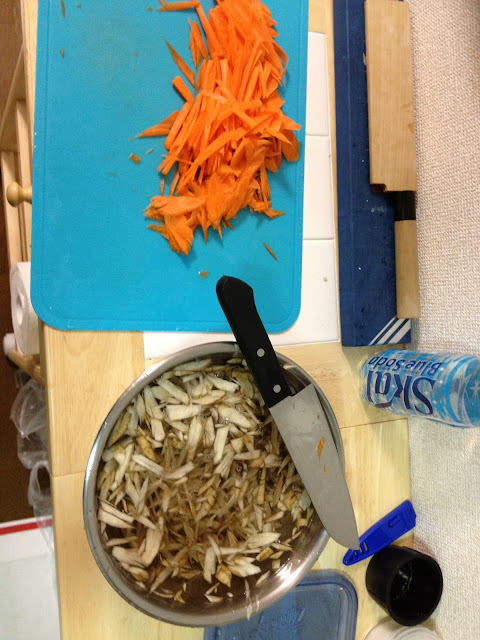 After likewise reducing a single large carrot to slivers... 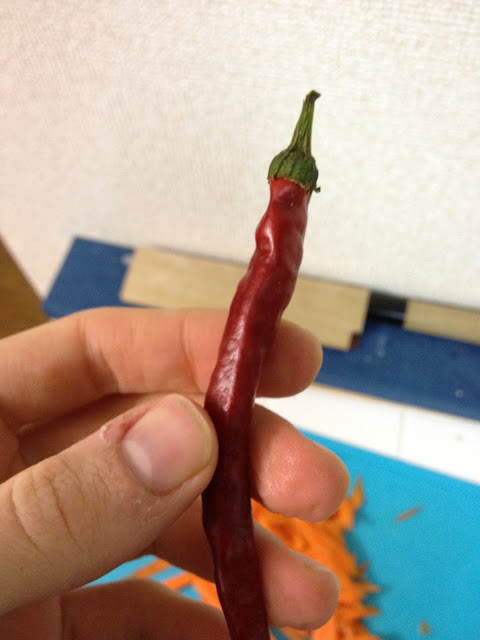 I chopped up one of the non-descript hot peppers I bought at the Gojōme market, 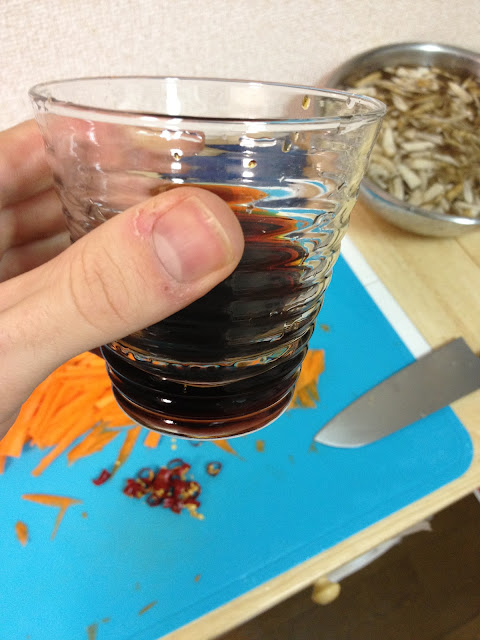 ... and mixed up a batch of stir-fry sauce. The archetypal recipe calls for about 3T of soy sauce, 1T of sugar, and 1T of mirin for these quantities: this time, going for a richer flavor, I used 1T of maple syrup instead of the sugar. I'd say I like my approach (Japanese-Canadian fusion?) even better than the original. 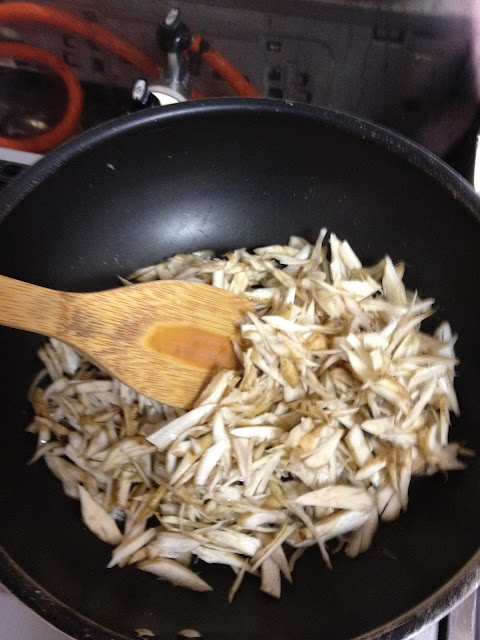 Using plenty of sesame oil for flavor, I set the gobō to stirfry for a minute at high heat... 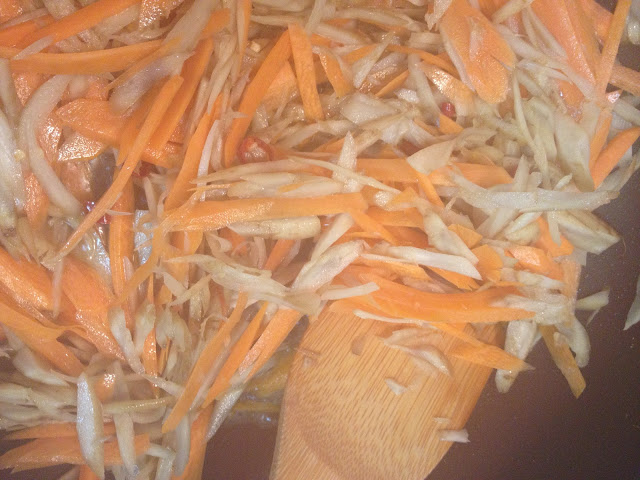 then stirred in the carrot. A minute longer to get the carrot softening... 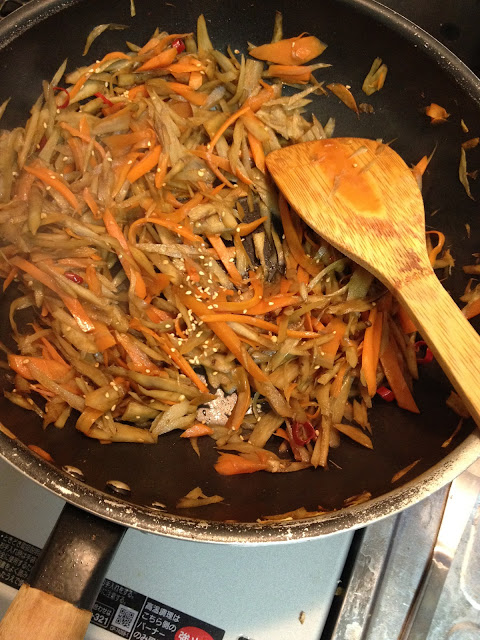 and I added the sauce, tossed the mix to combine, and boiled the lot down until the liquid was evaporated. A dash of sesame seeds for visual interest, and dinner sides and bento filler for the next few days were ready to roll. Sweet, salty, a little bit spicy, and 100% delicious. More later.


(1) I'm too honest, not to say slow on the uptake, to pull the stunt Kenny did by pretending not to understand a word she said and roughly showing her out while babbling English-sounding gibberish. The look of recognition and disappointment on my face when I opened the door and she told me she was from NHK must have been enough to bust me.

(2) Doesn't help that all the decongestants that have more than a placebo effect are treated as illegal methamphetamine precursors here. So tea and bedrest it is.

(3) Certainly not a few of my coworkers seem to be unusually interested in my diet, if in a sort of vaguely naive way (<Can you eat soup?>).

(4) Kind of a big deal, since my back-of-the envelope math suggests that rice is presently the largest single contributor of calories to my diet. I've never exactly thought of myself as having a diet centered on a single staple crop, but considering that I've just finished burning through 9kg of rice in 3 months, I suppose the armchair foodways specialist in me will have to revise that conclusion.

(5) There's no good substitute either for nira, "garlic chives", which I don't see a lot at home. It's a  shame, too, because they are delicious. Hey, foodies, stop blubbering on Tumblr about killing your pet chickens for "sustainable local meat" and get on this!

(7) Uncooked, the stuff smells a bit dubious, and the above ground portion is a redoubtable burr plant that served as the inspiration for Velcro, and, to my highly untrained eye, looks like the kind of weed that might kill your dog or make you take your clothes off and turn into a twitchy, crystalline spirit jaguar.

(8) The soaking water always turns a really alarming shade of yellow, another reason I wonder that anyone was ever brave enough to eat this stuff. For home players: make sure to change the water a few times as you process the roots and keep both unshredded and shredded roots underwater as much as you can.

(9) Shave the scored root as if sharpening a pencil to nubs. A more skilled chef than me would make longer, thinner segments. A smarter home cook would just julienne the whole works very thinly.