As unmistakeable signs of spring began to make themselves felt after the long Akita winter, the school year wound down towards the end of the Japanese school term in mid-March, and I found myself marching my students through final reviews for their high school entrance exams even while marching myself through a parade of mandatory end-of-year office parties. By the time it was all over, and I was sitting through the lachrymose middle school graduation ceremony at my favorite school, (1) I'd been at it wall-to-wall for weeks.(2) But when at last the songs were all sung, all the pictures posed for, and Spring Break arrived at last, it brought no rest for the weary.

Where most other developed countries send their teachers home or to continuing ed courses during the school breaks, here in Akita, teachers are sent to do desk work at their home schools when students aren't in (3).  Hence, since my "home" desk lies at the Board of Education, just as I was in the long weeks before the school term in August, I was sent to the city office to "work" for two and a half weeks.


But with oceans of time at my disposal, at least I had plenty to spare on one of the last bureaucratic rites of passage for my time in Japan-- converting to a full Japanese driver's license.

Technically, it was a bit early to start this process-- under various international conventions on road traffic,  the International Drivers' Permit (a paper folder with a pasted-in photo that looks right out of a spy movie) I was driving with remained valid until August-- but hey, I figured when Ms. Furuyama suggested it, there's no time like the present. Especially when the driver's license process is, I recalled hearing,  a headache even for locals-- a kind of Gesamtkunstwerk of bureaucracy.

Ms. Furuyama made a few calls and put a brave face on matters:

Having paid 3,000 yen to have the data on my license officially "translated" by the Japan Auto Federation, and armed with a further half again that sum, my IDP, my US driver's license, passport, my Japanese residents' ID, a notarized certificate of residence from the city office nearest me, and "passport" photos of a precise and different size than ordinary passport photos,  I "merely" was to present myself precisely between the hours of 2 and 4 PM at the Akita Drivers' Testing Center and there take an interview and schedule an appointment for a written exam, eye check, and practical driving test (to be taken at the office's convenience from a week to months later).

Not too pleasant, at first glance. I hit the English-language Internet-- to find the licensure proceedings being described in earnest on the usual foreigner-assistance sites as "arbitrary", "nonsensical", "prejudiced", and "evil". Ouch.

Although blessed with a much simpler application process, (4) Stephanie decided to come along, and, always up for a road trip, Kenny offered to drive us all into town.

We got underway at 9-- first stop, the JAF office (5), where we drank tea and read each other facts about Colorado, Oregon, and New England from outdated AAA Tourbooks in the waiting area while we waited for the (entirely monolingual) staff to "translate" our English cards into Japanese.

A quick ramen-and-springroll lunch by the time they'd managed to get their papers in Ordnung, and we made it to the testing center --an isolated, disreputable-looking 70's complex that looked unnervingly like an abattoir-- with almost half an hour until they opened the license-exchange desk at 2. So far so good. We were even able to prevail upon the woman behind Window 50, <FOREIGNER LICENSE EXCHANGE> to let us drop off our bundles of paper a little early and usher us to our waiting seats-- set a little distance apart from the "main waiting area", of course.

"So, why is everyone sitting and waiting over there for so long?" asked Stephanie, motioning towards the ranked crowd of Japanese DMV visitors as we took our numbers for the interview test.

"I expect waiting until their number gets called so they can do the paperwork they came to do. So it's different in Australia?"

"You either do everything on the Internet, or you make a reservation to come in to VicRoads and do everything right there without waiting. Isn't how that works in America?" 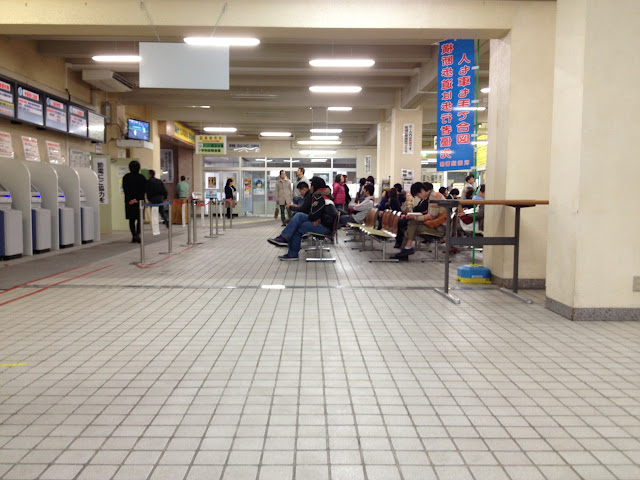 Across the lobby, we read signs and watched the wheels turn slowly. A bank of automated kiosks lined one wall, apparently for the use of holders of new IC-chipped drivers' licenses-- but it was guarded by a rope-barrier and a female subaltern who intercepted any attempt to take advantage of self-service.

Time passed. A platform-shoed college student picked her way towards "Eye Testing" like a newborn giraffe. Kenny's phone ran out of batteries, and  he and Stephanie switched to playing at making eye contact with unsuspecting starers.(6) In the main hall, someone had equipped his preschool-aged daughter with perfect shoes for a day at the drivers' license office-- yellow car-shaped sneakers with vinyl "tires".


A door next to Window 50 opened and a pair of examiners in stretched sweatervests and name-badge necklaces emerged. <Ah, excuse me? Ah, er, could you all come with us?> they asked Kenny. <Yes, well, Stephanie and I are applying to exchange our licenses for Japanese ones...>, I answered, hopefully.

The functionary nearest me almost glanced nervously in my direction before recovering himself.  <Oh, then would you follow us?>, he asked Kenny again, indicating a small beige cubicle with a printed sign reading <CONFERENCE ROOM> taped to the door. Looking through the open door, I could that the folding table inside almost touched all four of the walls.

We found our seats and waited politely for the officials to finish stepping back and forth over each other's chairs, unloading two bulging file folders filled with triplicate Xeroxes of our documents, and clicking their pharmacy-giveaway five-in-one pens. While the scrivener opposite me searched the pockets of his elastic-waist chinos for the blue highlighter in his shirtfront, I had plenty of time to read the whole-page blowup of Stephanie's driver's license on the top of the pile in front of me.

<Ah, well, uh er, then, let's start with the gentleman from, uh, Australia>, the near guy said to Kenny, pointing across the table at me.

<Actually, I'm the American....>, I started, tentatively. Across the table, the official sucked air through his teeth as if he'd just broken a nail.

<Ah, well, then, let's uh...> Switching piles with the second examiner, my interviewer rummaged through the stack, emerging with a two-page print-out headed <INTERVIEW QUESTIONS>, a copy of my drivers' license, and two more wood pencils.

<Err, so is this date correct?> the examiner asked, circling the renewal date on a copy of my driver's license with the duller of the two pencils.

<What kinds of car did you drive?>

<A few of my friends' cars. And a manual-transmission pickup truck. A Ford Ranger, I think.>

[Writing busily in a middle-schooler's ground-in hand] <A... Ford.>

<And did you drive these cars?>


<And can you tell me the dates you left America between getting your license and now?>

<Well, I took a couple of vacations in Europe. They were all just for a week or so. I like traveling, you see.>

<Ah, err, then>, he started uncertainly, leafing through a complete Xerox of the back pages of my passport. <Well, we'll need to uh, establish, that you were driving for at least three months before you came to Japan, so, uh...> He pointed to a stamp marked "2008". <Starting from here...> <What country is this from?>

I leafed through my passport for a likely looking reentry stamp. <Looks like this is it. Only a few weeks later.>

<D in the circle means "Germany".>


After a quarter of an hour, the back of one of the passport-copies was covered with a complex matrix of circles, arrows, and dates that looked like a mandala drawn by a kindergartner.

<Ah, well so, it looks like you were indeed driving for three months between here and here, then.>, he said, circling two dates a week apart with a highlighter. <So, when you got your license in 2009, what kind of lessons did you take?>

<The letters "1st REN" stand for "renewal". Just like the foreign word renyuuaru>.

<I believe that's when this card expires in 2018.>, I said, allowing slightly too much respect language and just the beginnings of an icy edge to creep into my voice.

<You start with classroom lessons and a provisional permit...>, I began...

By the time I'd explained the American driver's licensing system and been called on to explain the number of questions and passing score of the drivers' ed exam, the exact number of hours I'd spent learning to drive, the day I received my full permit, and give an estimate of how much a drivers' ed course cost, and the tax-horsepower engine displacement of an American-spec Camry (7) it was nearly 4:00.  Down the table, Kenny and Stephanie were attempting to make plain that the "smudge" on the Xerox of her driver's license was a hologram of the Victoria State Coat of Arms and therefore different from the Australian Great Seal on her passport. At last both examiners put their papers in order, and turned again-- to Kenny.

<Well, ummm, that's all we need, then. In about a week we'll call you both to schedule the written exam and the road test for... Mr...>

<Perfectly. Thank you very much for your time and consideration.>


"Well, good work all round, eh, guys?" said Kenny as we walked back to the parking lot. "Took a while but looks like we told them what they needed to hear!"

"Yep. But if that was the interview, I wonder how the practical will go...?"

(1) This was Higashi-- and there was truly not a dry eye among the entire graduating class. Even a few of the underclassmen and teachers shed tears. One mountainous rugby boy was actually paralyzed by sobbing while onstage. I understand their perspective-- after all, after half a year of excruciating test prep, the class is all going their separate ways. Some of them, I'm sure, wept to lose their friends, and some out of sheer relief. Stephanie and I got a lot of mileage out of telling inquisitive teachers and students we'd cheered at our graduations.


(2) Hence my absence from this scene.

(3) Those who coach the sports and culture clubs spend the days leading their students, who likewise give up their breaks. The rest of the faculty all report to work, where there's nothing much to do and, from what they tell me, more or less do absolutely nothing while earnestly attempting all the while to give the appearance of intense activity.

(4) Australians and citizens of most other nations ordinarily get approved without having to take the full course of testing-- but for a few, notably China (bet you saw that one coming), the hurdle is much higher. In the case of the United States, some ignoramus apparently decided that it would be necessary to separately negotiate differing approval procedures with all 50 US states. (Apparently nobody took the time to explain the relevant parts of the  US Constitution to the poor devil, not to mention the appropriate state and federal laws..!)  Canadians are subject to the fast-track approval process-- rumor has it that the negotiations took decades, and really did involve knocking out a deal piecewise with all 13 provinces and territories!

(5) Hilariously the parking lot of the automobile association was perilously narrow and its poorly sited driveway was graded in such a way as to scrape Kenny's undercarriage a good one on the way in!

(7) I have a taste for hyperbole, it's true, but I promise I am not making any of this up.