Not, considering I've read Edward Said and (since the last time I updated this blog) passed two real and chilly winters here without such unimaginable conveniences as insulation and the 24-hour ATM, that I've ever had much reason to believe in the hyper-modern fantasy Japan we were all promised back when Walkmans, Laserdisc, and Tamagotchi pointed the way to inexorable world domination, but in a Japanese 2015 where my household robot is a sexless, American-made hockey puck, I burn lamp-oil for warmth, Chiba City is a safe bedroom community where the sky is never the color of television, and of all things, I send handwritten faxes, it's nice, occasionally, to still see a glimpse of the great Japanese techno-utopia that never really was.

Yes readers-- this evening, feeling peckish as I fought my way through the vast and teeming crowds of Tokyo Station, on the way to transfer between two gleaming bullet-trains,  I remembered there was something here I had always wanted to try for dinner. I activated my pocket terminal, a six-inch slice of glowing silicon, armorglass and thermoplastics. With a practiced fingerswipe, I called up its built-in moving-map software. In an instant, a thumbnail-sized Korean microchip came to life inside the "smartphone"'s aluminum chassis, alive to dozens of infinitesimally faint signals emitted from satellites spinning 12,000 miles above my head, cross-referencing themselves with each other, and with the mapped coordinates of the nearest transmission stations of the wireless info-net to determine my three-dimensional position to the meter. Keying without breaking stride, I entered 「加熱式 駅弁 東京駅」into the terminal command prompt and stabbed at the 検索 "search" button, spitting a digitally enciphered burst transmission at an unseen server mainframe many miles away. The slim screen filled with a slashing rain of kanji as the query splashed out across the data sea of cyberspace. Too many choices-- pull in closer to the buzzing hive or you'll burn yourself out, cowboy. The map juddered imperceptibly as the magnification ticked inward to the 30m/cm scale. And there-- across the thrumming concourse-- there it was. A packed shop humming with patrons. There was biz here. Biz-- and bento. Just what I was looking for. I selected a paper-wrapped styrofoam lozenge and a bottled soda and paid the cashier, a harried-looking girl in a filtermask and uniform kerchief, with crisp, smooth yen.

Moments later I was boarding the gleaming shinkansen, luggage in one hand, plastic bag in the other. As the conductors bowed us out of the station and we purred away northward from the megalopolis, I opened my pack and extracted the bento... 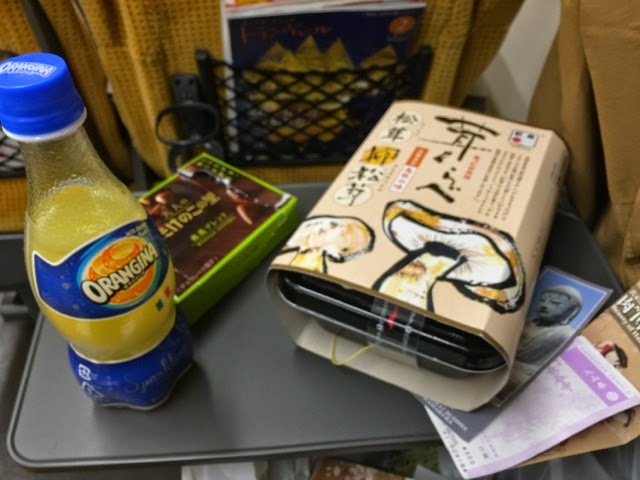 Back to reality, this is a fancier, nay, technologically advanced, variation on the well-known 駅弁/ ekiben train lunch box and a minor item on my Tokyo bucket list for some time-- an instantly self-heating bento. As fantasy-Japanese as giant robots and car phones that can also send email, these aren't quite as ubiquitous, and a damnsight pricier (with drink this thing cost almost 2000 yen!) as regular bento, but the gee-whiz factor is impossible to ignore. 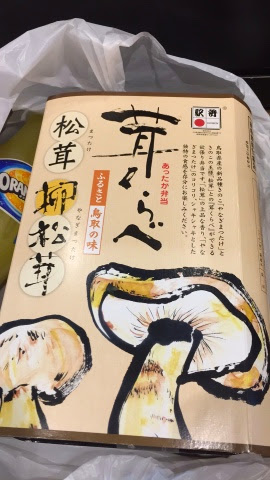 Although the things come in varieties ranging from soup to barbecue-eel, this particular model is a mushroom 炊き込みご飯 takikomi-gohan -- the Japanese take on rice pilaf. The name 「茸くらべ 」"Takekurabe", lit. "Comparing Mushrooms" puns on the well-known story 「たけくらべ」"Takekurabe", lit. "Comparing Heights",  a depressing novella (1) by Meiji period female author Higuchi Ichiyo(2). Excitingly, the mushrooms to compare are two varieties of the uncommonly rare and delicious matsutake! 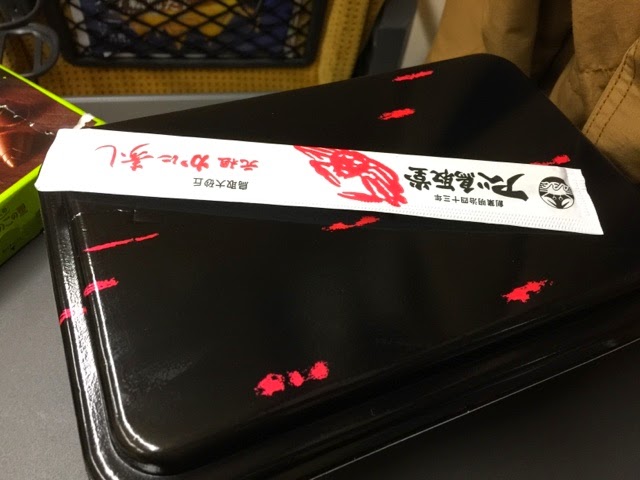 ... One immediately notices a dangling string protruding from a hole in the styrofoam container: 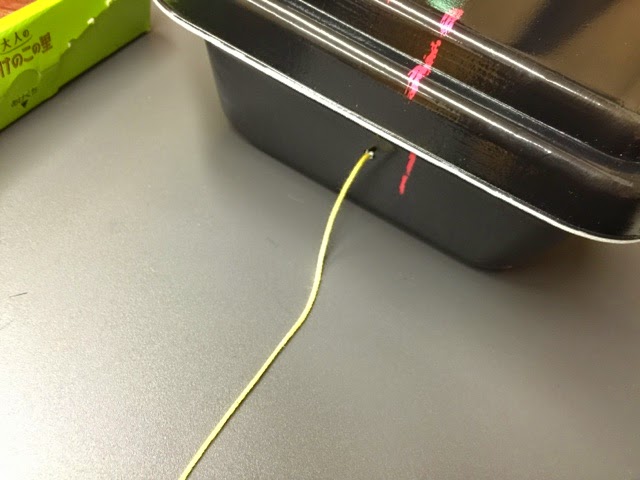 This, according to the directions, is the ripcord for the built-in flameless chemical heater that warms the bento to edible temperature. 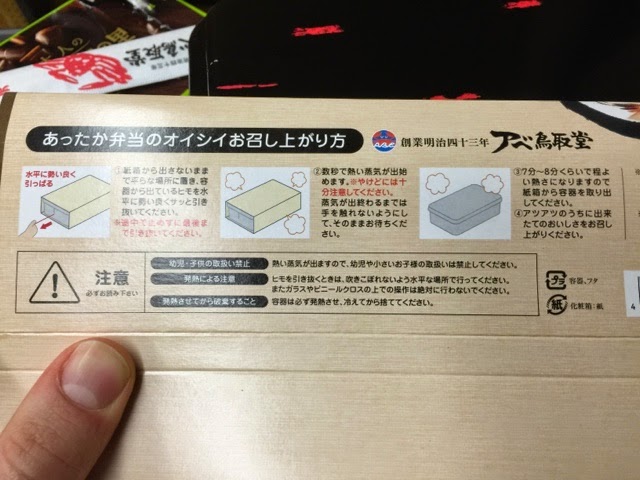 A gentle tug on the string and, with a sudden pop and an instant rumble of boiling, steam begins to rise from the container. And, after only a few moments... 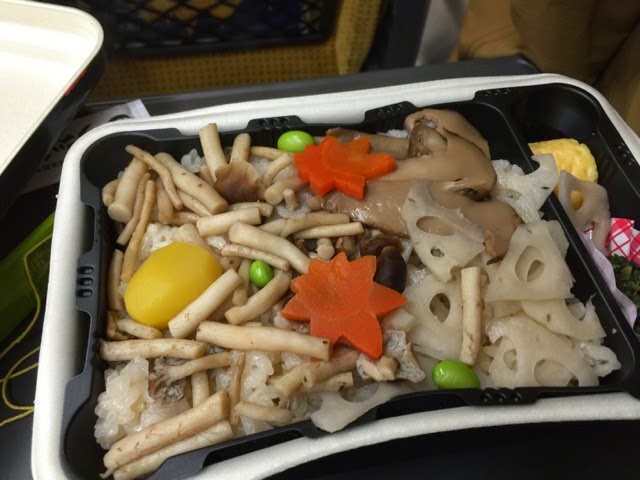 After dinner I take a quick peek inside at the inner workings. Underneath the interior food tray... 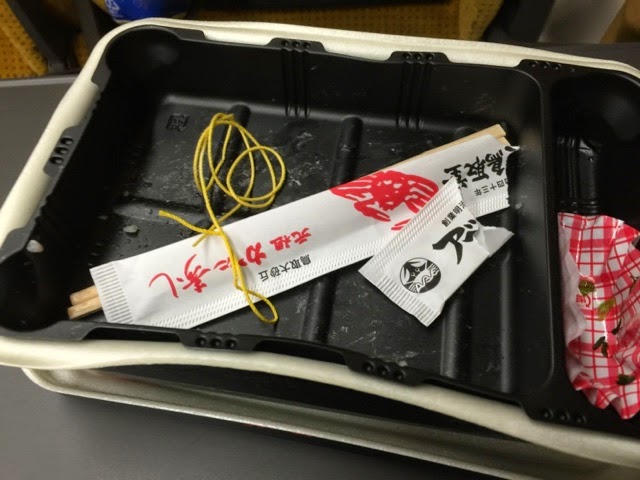 ... Is the heater, whose label charmingly notes that because it is comprised of quicklime and water, it can be used to fertilize a gardening-minded traveler's plants (!) 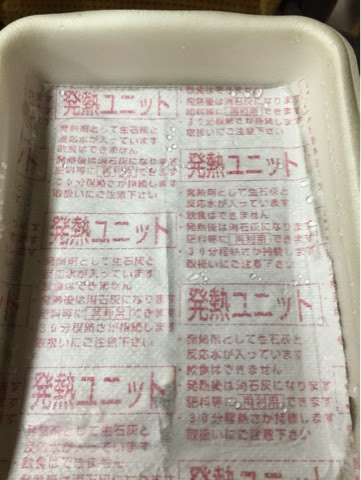 Not this traveler, unfortunately... 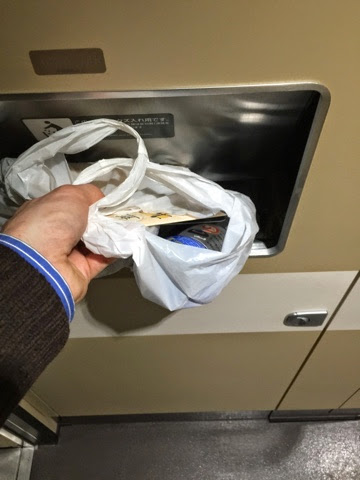 (1) It's about kids growing up in the Yoshiwara licensed prostitution quarter. Interested parties may read a somewhat superannuated translation by Edward Seidensticker.