A Day in the Limelight

Despite an insomnia-induced handicap (someone had a party and decided to invite a family of hard-drinking rhinoceroses instead of me late Friday night, as far as I could tell), I managed to get up with more than enough time to get myself properly into my kimono in time for an early Saturday morning bus, accompanied by Professor Ashmore (he of the kimono-buying tips) and his Traditional Performing Arts class, almost entirely composed of exchange students geared up in Japanese clothes of varying type, formality, and vintage. Our goal was Kosaka, a pleasant mountain town in the extreme north of the prefecture, home of one of the oldest continuously operating Kabuki theaters in Japan, built around the turn of the century for the amusement of a boom-town's worth of miners.

We cut quite a figure as we piled onto the bus, kitted out in outfits identifiable by me alternately as having been originally intended to practice iaido, go to summer festivals, and attend debutante balls-- and we got the weird looks to go with them when we arrived by mid-day in Kosaka to find an earthquake-relief benefit fair ongoing in the city park, a temperature in the high 90s and ourselves the only people within miles not sensibly wearing shorts and tee-shirts.

It's a bit hard to describe how obvious a 6-foot American wearing a formal kimono can be in a public park on a hot day, but I'll say this-- usually I expect only children under 6 to stare for more than 10 seconds when I'm out in public. This was not in the least surprising considering that I had effectively chosen to attach a giant neon sign to myself labeled "I AM A FOREIGNER AT THE MAXIMUM PEAK OF WACKINESS"-- in the half an hour I had to kill before seats opened at the theater, I must have had 2 dozen conversations with curious folks. What was interesting was that in my kimono be-clad state, I was, without exception, addressed only in Japanese,  mostly accosted by grandmotherly looking women, and invariably complimented, with eyes-a-twinkle, on how good I looked.

It would also be hard to convey exactly how unsuited for the climate my choice of clothing had been. The temperature on TV that morning had predicted highs in the 30's, which meant that I was staring down the barrel of temperatures but little lower than blood heat, wearing 4 billowing layers of dark, tight-knit fabric. I bought the largest snow-cone I could find and ate it as quickly as care for my garments would permit, and retreated to the shade near the recruitment booth for the Self-Defence Forces to wait for the matinee to begin.

Not being actually enrolled in the class for which this excursion was a field trip, I had very little idea of what to actually expect from the performance for which I was now waiting. My reading on Kabuki mostly having focused on the sterner stuff, I was disappointed to hear that we'd be watching a variety performance consisting of a brief play and a series of dance routines, all in a non-traditional, anything-goes style called "Super-Kabuki", designed by the Shochiku Company, owners of this (and most other) Kabuki playhouses to attract a younger audience to their establishments. Apparently, as I learned while queueing with Professor Ashmore, the informal material was also considered appropriate to the actors appearing this afternoon-- as young journeyman performers, it would not be until several seasons of lighter fare (traditional and Super) that they would be graduated to the major theaters to play leading dramatic roles in the canon works.

All the same, as we were ushered to our "seats" near the front of the low straw-matted audience seating area along raised "aisles" made of weathered wood, I found myself having a hard time really reconciling the idea of a young, hip Kabuki to the theater's interior, which looked every moment of its 100 years old.
The curtain rose on what looked to be a fairly traditional setup for a sewamono-type domestic drama-- a young onnagata (cross-cast actor in female attire) portraying a young bride newly married to a brash Edo townsman. Picking my way through the period-imitating dialogue (lots of obsolete verb-endings for flavor), I was pleased to find myself following most of what was going on on stage (stylized acting really helps here), and wondering what cruel fortune had in store for our protagonist-lovers. And then I was blindsided by a joke about body odor in modern Japanese, and a followup punchline about taking a (highly anachronistic) shower. And before I knew it, things had gone all Super-Kabuki on me.

In structure, the setup for the play that followed certainly resembled 'normal' Kabuki-- complex family politics threatened to force the main characters to divorce for reasons I wasn't quite able to discern, setting up the kind of conflict between higher duty and human emotions that animates so many Kabuki and bunraku plays. Except here the plot had been cut down to 4 scenes, the traditional comic interludes had now been extended until they dominated the affair, and the tone altered to switch without warning between the serious and the bizarre with a kind of winking taste for non sequitir that savored less of the traditional stage than it did comic anime. And yet, it somehow managed to work-- by the time an onstage costume change was used to reveal an 'old man' character was actually wearing a middle-schooler's sailor uniform   under his period garb, I was sold on the sheer zany exuberance of the experience, and remained that way from the ensuing audience-participation bit (in which one of our number was called up onstage to 'apprehend' a traditionally-dressed burglar (amidst a storm of Lupin III references, natch) all the way until the triumphant ending dance number, set (I feel I must emphasize I am not making this up) not to shamisen music but to a techno remix of the Pirates of the Caribbean theme.


It certainly wasn't the 17th century revenge drama that I went in expecting, but in all, Super Kabuki certainly delivered on the "entertainment" side of the equation-- and a reminder that, after all, Kabuki was, at its inception, a "low-class" entertainment that happened to end up as High Art. A good adventure and a great Saturday-- two thumbs up! 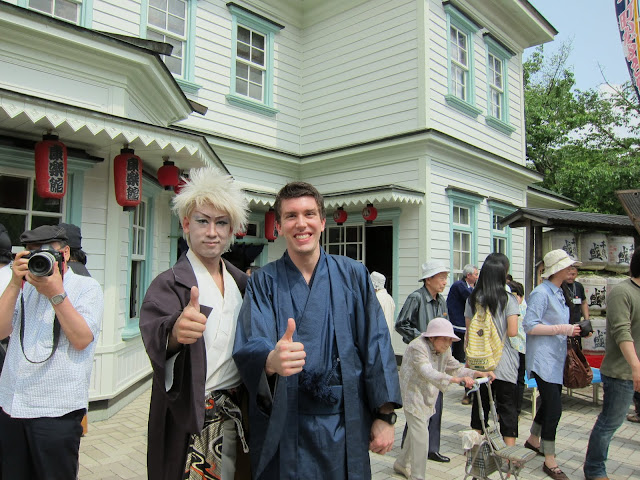