According to popular account (backed supposedly by TV), the summer rainy season is now upon Northern Japan-- and given Akita's track record of grey and rainy skies, I ordinarily would have cause for concern, (not to say depression). It seems somehow perversely appropriate that, for the past two weeks, we've all been treated to temperatures in the high 20's/(70's- low 80's F), brilliant blue skies, and a nearly constant cool breeze from the north. Unreasonably fine weather for mid June in my book. Add that it even cools to the mid-60's at night, and I might have to vacation here yearly-- not that any of this has stopped virtually every other student from complaining about the heat!

It's weather like this, in short, that puts a man in the mood for adventure-- and I had a fine destination in mind.

On my regular bus rides to the mall, I'd noticed a roadside torii on the rural outskirts of Akita City proper, apparently marking the entrance to a shrine that, I surmised, lay somewhere out of sight down an alley between houses. Not too many people seemed to know much about it-- except for Professor Ashmore, who claimed the temple itself was located in a nearby forest clearing and sacred to Inari, a Shinto divinity worshipped as a god of prosperity, (although His/Her androgynous nature and associations with often supernaturally tricksome fox spirits suggests She/He once played a more ambiguous role.) Prof. Ashmore went on to mention that he found the site to be slightly creepy-- in his recounting, stepping inside the precinct was accompanied invariably by a chilling drop in temperature and a sudden inability to hear the nearby road, as if the grove was literally cut off from the rest of the world. Needless to say, for me, a more ringing endorsement for a destination would be hard to imagine.

And so, after breakfast on Friday, I headed out the "back entrance" of AIU, past the graduate student housing, a Mongolian BBQ place (to which no student has ever, to my knowledge, actually gone), and an elaborately set up croquet pitch, another nearby public amusement of which my friends profess no knowledge.

In a minute or two, I'd gained the road, a pleasant rural highway with a welcome parallel pedestrian/bike path. 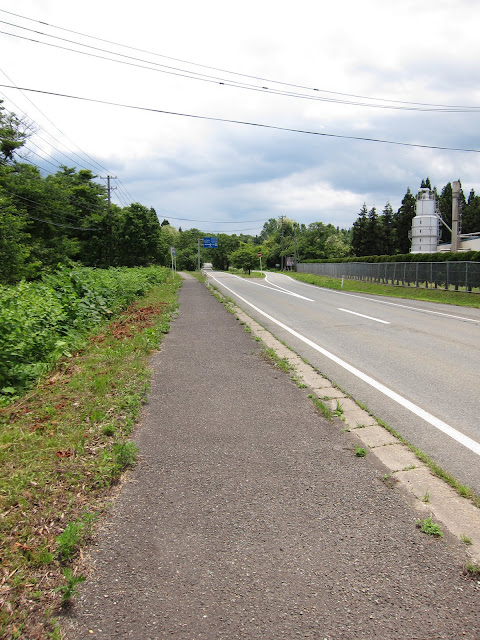 A minute or two more and I was on the crest of a hill overlooking the village of Kawabetoshima. Turning off the road to take a shortcut down a gravel track, I found myself passing a hillside Buddhist cemetery with a good view of the town. Small memorial plots like this one seem to have sprouted at random around these parts, their memorial obelisks standing out amidst the low houses and flat rice-fields. 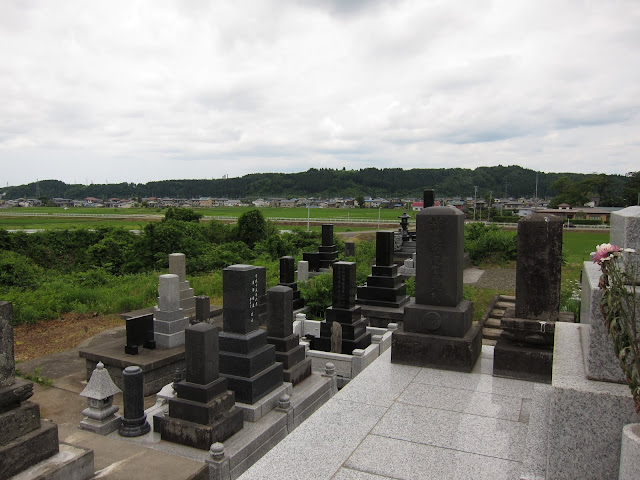 A tractor puttered by as I walked through Kawabetoshima, and my friend Shugo waved as he whirled past on his motorbike. 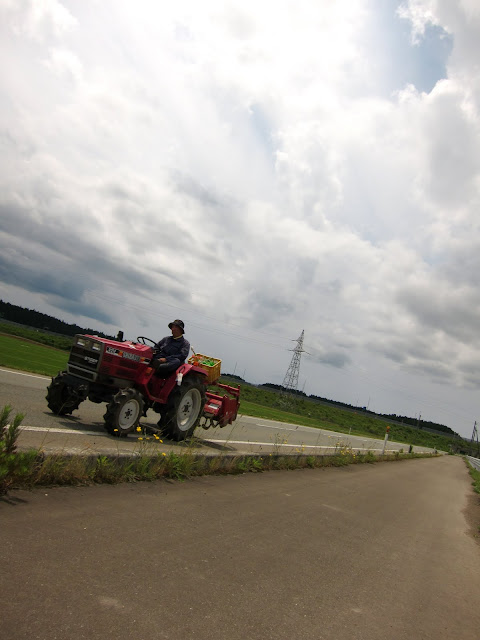 By the side of the road, the rice looked to be coming along nicely, the sky reflecting in the water between rows. 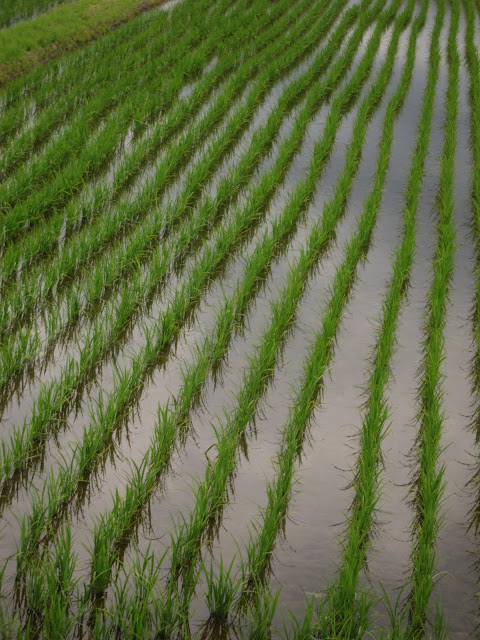 Not half an hour later I found myself crossing  a commuter train line into what my map labeled as the next village, Kawabetoyonari.

A few steps beyond lay the mysterious outer gate of the shrine, garlanded with a cordoning shimenawa rope and shide streamers.

The path angled up a hill between the houses and disappeared into the woods above the town. 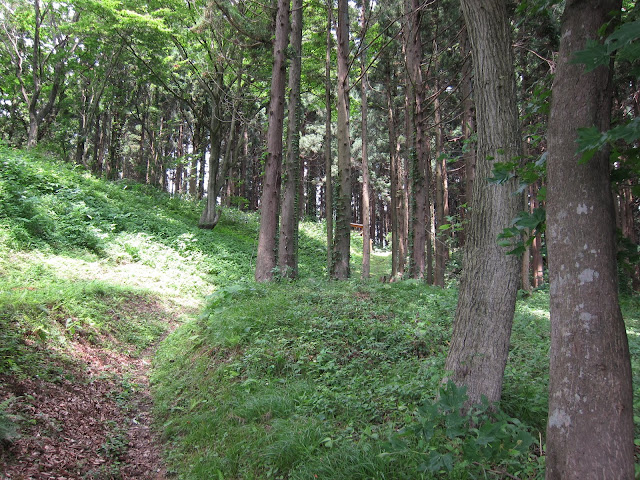 The forest was indeed surprisingly quiet, the road sounds below muffled to a distant murmur by the moss and undergrowth. Through the trees, I could make out the second torii, marking the actual boundary of the shrine, ahead. From a low branch, an immense raven stared at me suspiciously. Further back in the forest, I noticed that half a dozen more were quietly following me. 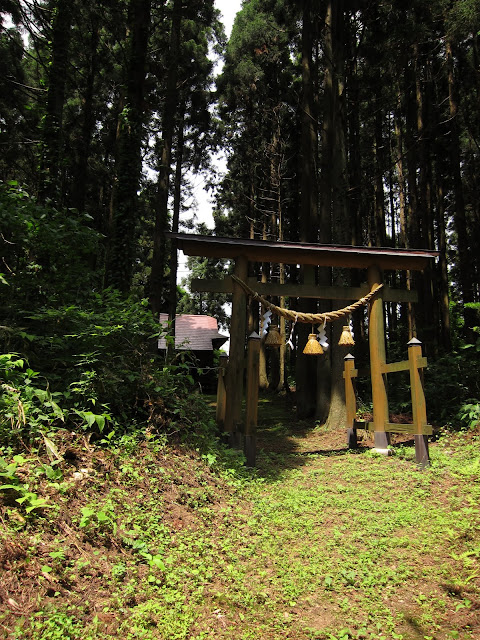 As I drew to within a hundred feet of the second torii, the ravens exploded into a ruckus of cawing, screaming murderously from the trees overhead, and making what looked unnervingly like experimental attack-swoops from perch to perch. The calls reached a crescendo as I drew even with the torii, half-seriously looking around for something heavy to swing-- and then, just as I entered the shrine's precinct proper, a clearing cut into the surrounding forest, died away all at once.

I laughed nervously-- if this was a movie, I'd just ignored the the crows' supernatural warning, and crossed a dangerously ensorcelled threshold. The effect was so pitch-perfect for a Hollywood encounter with the supernatural that I could almost imagine a small army of Disney sound designers squatting, animatronic crows in hand, among the cryptomeria. 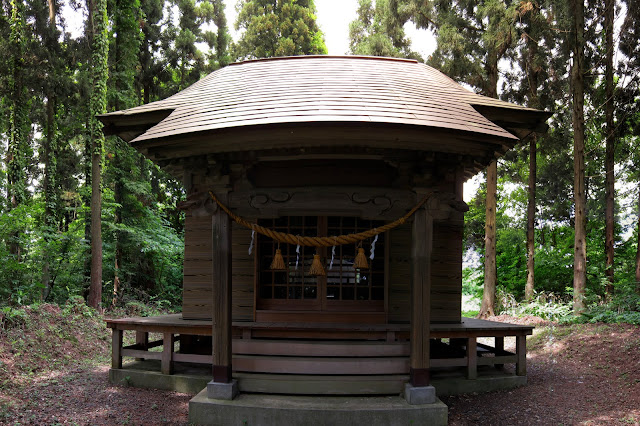 The crows notwithstanding, supernatural vengeance was not apparently forthcoming, as far as I could tell-- the noon sun filtered through the surrounding trees in placid ripples of light, the wind whispering quietly above. All the same, leaving nothing to chance, I paused at the threshold of the shrine's main building or honden, a raised structure made of unpainted cedar, to perform the brief rites of shrine-visitation, omairi: two bows in the direction of the altar within the honden, two hand-claps (this, it was once explained to me, is to ensure you have attracted the attention of the resident kami), and a final bow, held a bit longer than the other two.

Bases covered with the spirits, I poked around the grounds for a bit, then strolled down the hill again, the crows watching my retreat in silence.

Unchallenged by spirits, and with the remainder of an afternoon ahead of me, I figured I might be up for more in the way of adventure.

I walked on two more miles to the mall district of Goshono and, feeling shaggy in the heat, popped into the first hair salon I passed for a quick trim, surprising myself and my barber when I negotiated a walk-in visit, asked for a shampoo and a cut ( <If you can, get it about 2cm shorter, and as closely resembling my present style as you can manage...> ), and spent the next hour and a half chatting more or less successfully about politics (in the broadest of outlines) and classic movies with my stylist, a fellow in his 50's, dressed incongruously in what I thought of privately as 'space Western wear' (an open-necked shirt, boots and cowboy jeans, and silver-lapis jewelry, but all of it an unplaceably futuristic cut that said 'Shinjuku' far more than 'Santa Fe'), as he worked over my head all the way from a a boisterous, two-handed shampoo (it turns out that one bends forward into the rinse tub in Japan, as if being guillotined), to a final straight-razor neck-and-sideburn trim, an expert shoulder massage, and a light dusting of hair spray, applied by airbrush, not can.


Not a lot could have rounded out the day at this point, I figured, walking back to the bus stop for AIU through the first floor of the mall. It was then that I saw that Baskin-Robbins was running a free upgrade to triples today-- and today, the 31 flavors included not only Jamocha Almond Fudge, but  green tea and annin-dofu. Turned out the day was still looking up, after all.
Posted by -D at 10:41 AM