** Note: Well I'll be darned, the stupid phone put all my photos out of order. As soon as my summit with the robot cats is done, I'll have to go back and reorder 'em. In the meantime: Guess what paragraph each of these was supposed to follow!** The car people finally came through with a replacement vehicle to tide me over until my actual Corolla arrives. It's a free rental, sure, but it's got some high and some low points, to say the least. Chief among this is the vehicle's type-- it is a Toyota-branded kei-jidousha, (軽自動車, "light car") a class of micro-cars designed with Japanese road tax restrictions (rather, necessarily, than safety and comfort) foremost in mind. "K-cars", as the ex-pat community is fond of calling them, are limited by statute to a 660cc engine displacement (American motorcycle fans note this may be a smaller engine than your bike!) and to very petite maximum wheelbase, width, and weight limits-- most, hence, are consequently cubes of approximately the statutory size. These are the "tiny funny-shaped Japanese cars" people are thinking of when they think of "tiny funny-shaped Japanese cars." They are efficient (I got 21 km/L [50 mpg] today on mountain roads) and easy to park and maneuver in narrow village streets (as a bonus feature, mine can automatically fold and deploy its mirrors at the touch of a button) , but how anyone gets these things up hills in the Akita winter is beyond me. Although the light weight helps with mitigating the effect of the tiny engine displacement, the lack of power was distinctly noticeable in my example. Many K cars are extensively turbo- and super-charged to make up most of the rest of the deficit-- these look like refrigerators with hi-tech ram-air hood scoops, and sound, even at stop lights, like insane turbine-powered vacuum cleaners. The observant pedestrian might in time even learn to identify make and model by their distinctive flavors of compressor wail. Unfortunately, mine is naturally-aspirated-- and as a consequence I've been able to discover, while going balls-to-the-wall to keep up with traffic, that it redlines at around 9000 RPM, producing an engine note that sounds like a time machine with a leak in one of its singularity gromulators.

My k-car is also typical in having a harrowing lack of crumple zones, a fact that weighed heavily on my mind as I was driving through a surprise fall rain squall on Friday which left the road in flash-flood conditions. The Toyota saleswoman who handed me the keys on Wednesday was most worried, of course, about what, as a MANLY MAN, I'd think of the color-- a pretty, if rather fey, shade of rose pink.

And so, with a full tank of gas (all mine, as weirdly, I received my pink cube with the fuel light on), and good weather predicted on NHK, I set forth to drive the Oga Peninsula coast road in search of adventure.

Leaving Funakoshi, I first passed the harbor at Funakawa and the oil terminal in central Oga, before turning onto the coast road proper. The steep, rocky shore was dotted with jaggedly eroded islets among wide bays.
As I worked my way further westward, the road steepened and the steep, rugged shoreline was replaced with sheer, jagged cliffs. 23 km in, I stopped at Monzen, a coast village known for a 14th century shrine complex called Goshado ("Five Shrines"). As famous as the buildings themselves are the 999 rocky steps that lead to them-- asserted in some of my Japanese tour brochures to have been built in one night by namahage. I found the wooded trail entrance and paused for lunch midway up the first flight. As I climbed, passing a largish, newer Buddhist temple on the way, I wondered how on earth the demons had been allowed to get away with such shoddy work. The 999 steps were less stairs than a steep pile of irregular rocks. At last I passed the shrine's inner torii, after a tricky 10-minute clamber. To the side of the path, just inside the inner torii, was a well labeled "Mirror Well". A helpful placard (in an unhelpfully cursive Japanese font) explained that individuals who could not see their reflection in the water at the bottom of the shallow well were "fated not to live long." I wondered how they had gotten sick people up the mountain in the first place to try the "well test". Hundred yards ahead, the complex itself, a handsome row of five individual shrines, became visible through the trees. With the place to myself, I had plenty of time to donate pocket change to the resident deities and buy a protective amulet from an honor box at the main shrine.

After picking my way back down the 999 step rock pile, I got back on the road, headed for the extreme tip of the peninsula, Nyudozaki. The little pink car handled the mountain switchbacks surprisingly well, taking even the sharpest corners like a go-cart. A few more stops for photos later, I found myself at Nyudozaki. Here was a picturesque lighthouse that guarded the end of the Cape, a marker demonstrating our latitude at 40 degrees N, and, to landward, a profusion of slightly seedy souvenir shops and seafood ramen stands. One in particular caught my eye; from the signs out front and the looping, taped announcement it played constantly, the proprietor had seen a UFO at the spot years before, which had apparently left him with the secret for a tasty "UFO Ramen". I doubted it was worth 1500 yen a bowl, even if it had been inspired by extraterrestrials.

I wound my way home in the lengthening shadows, a burned mix CD spinning in the stereo, and plans (non-alien inspired) for dinner on my mind. 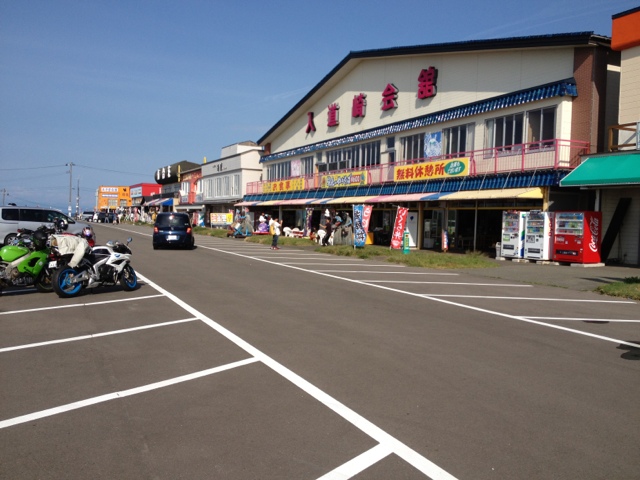 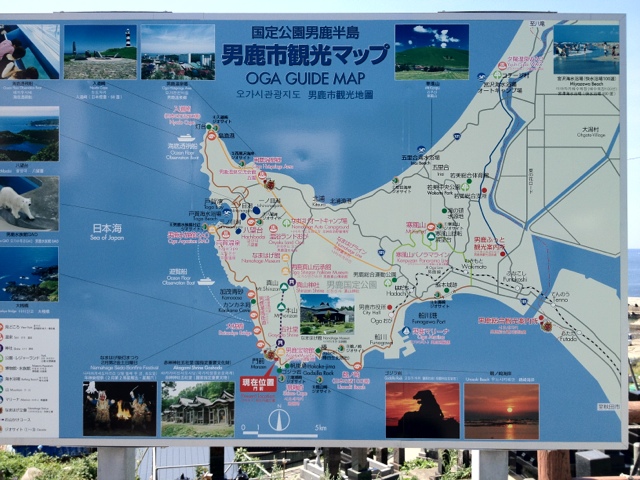 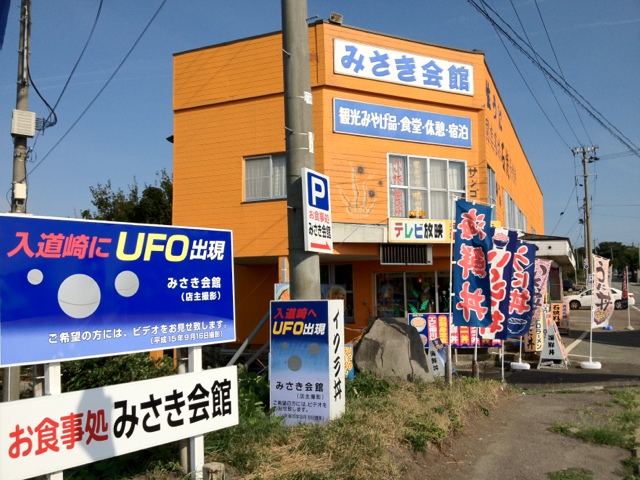 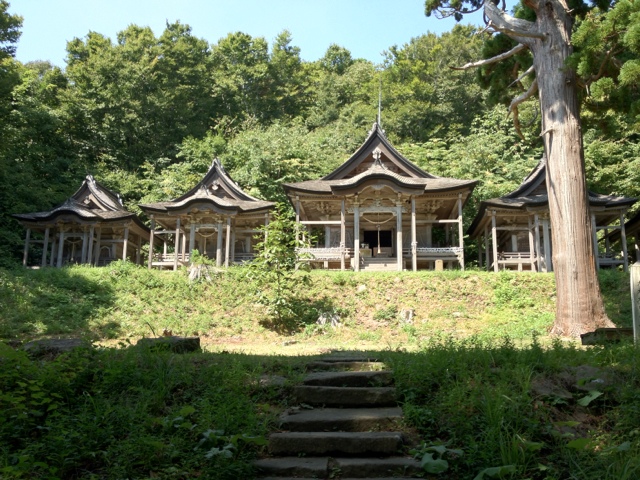 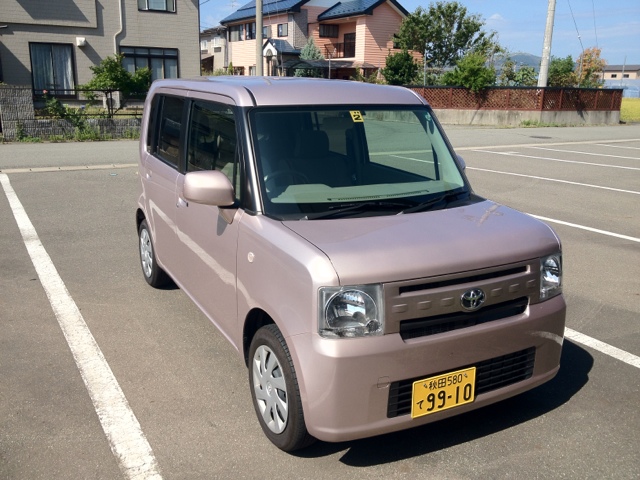 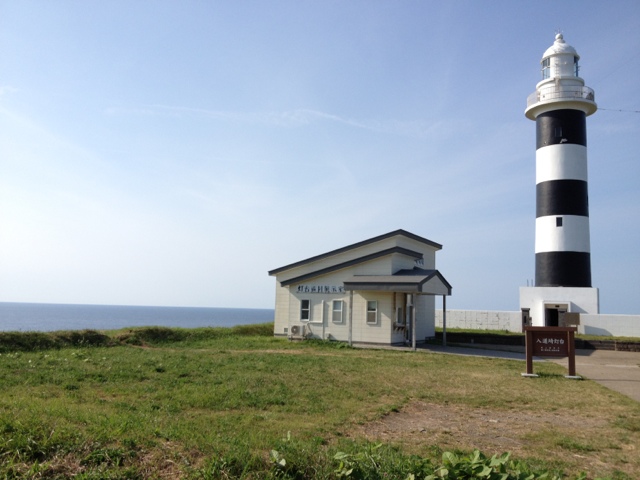 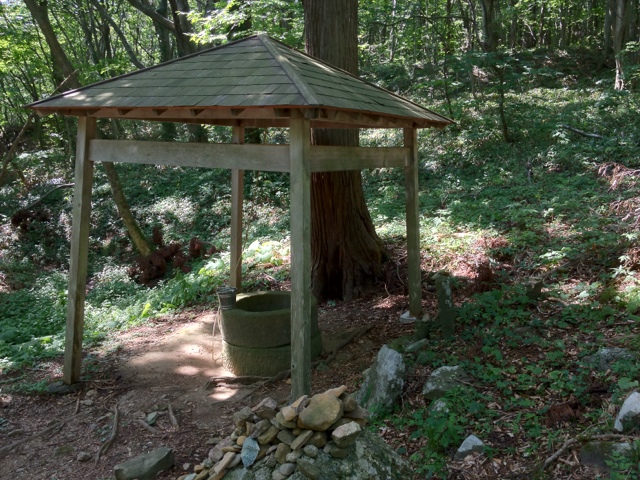 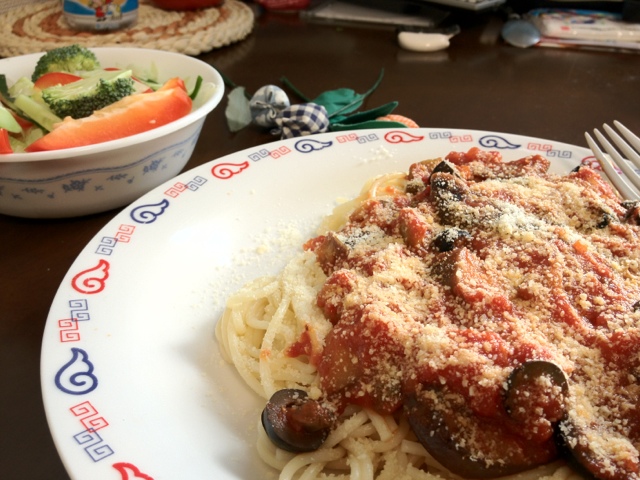 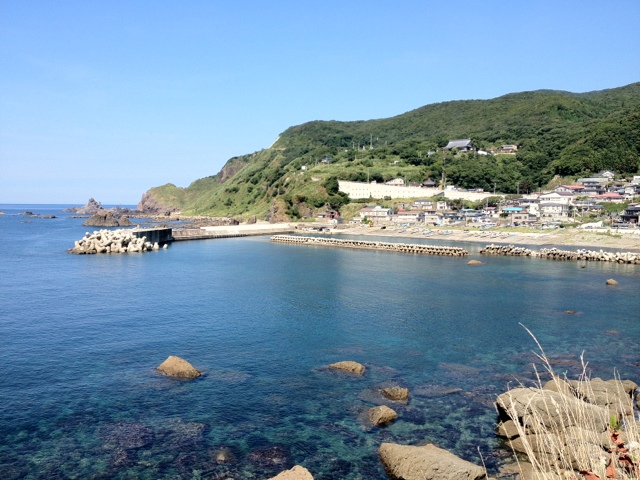 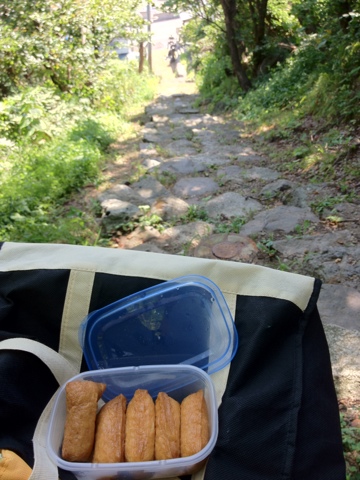 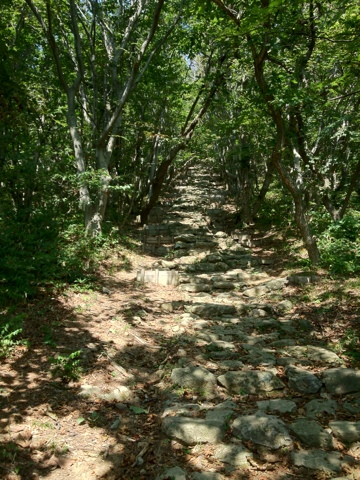 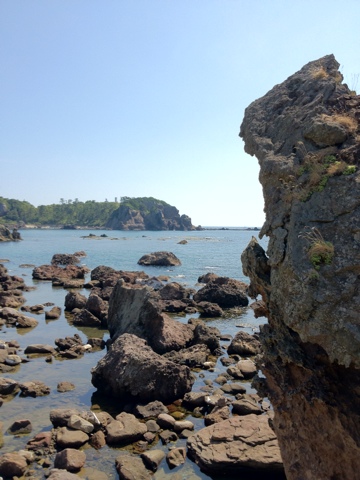 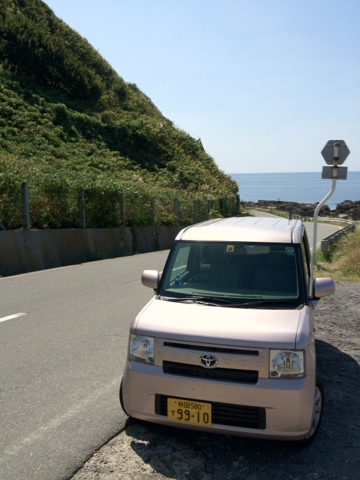 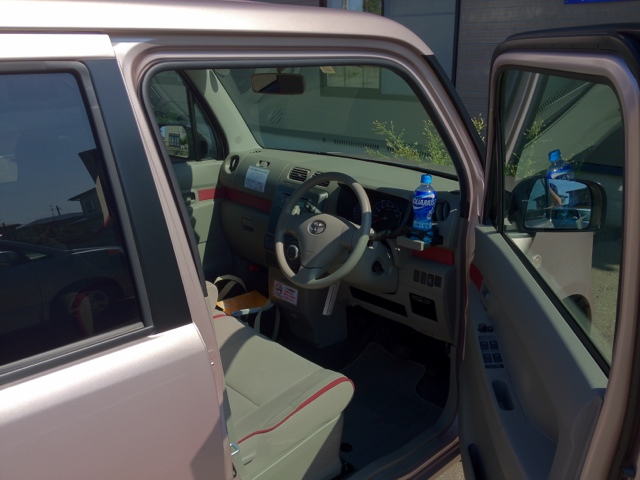 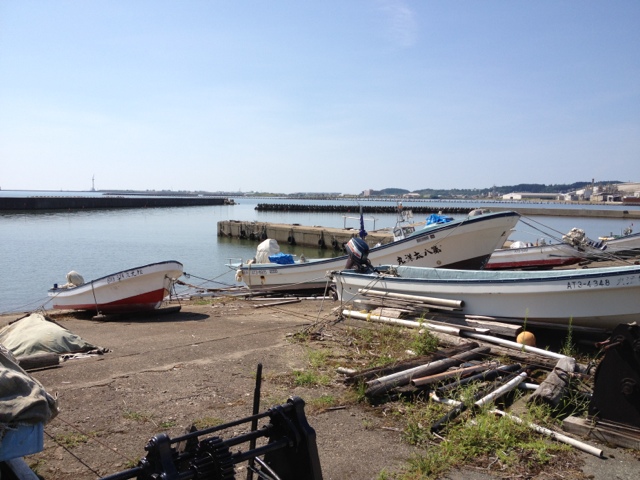 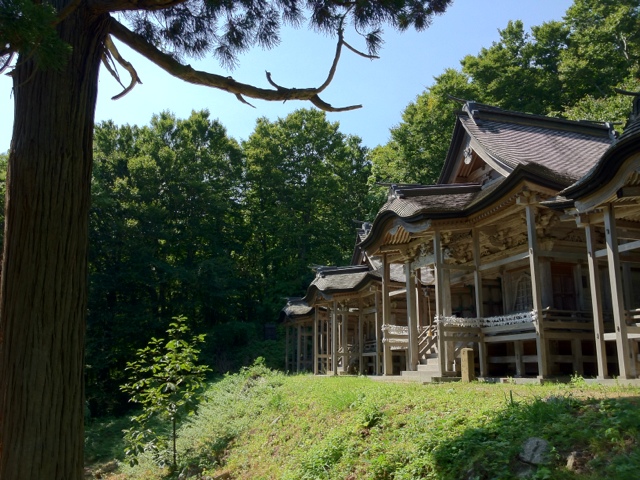 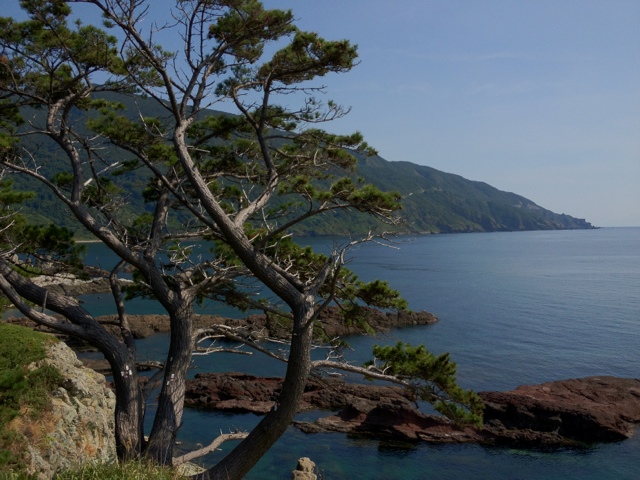 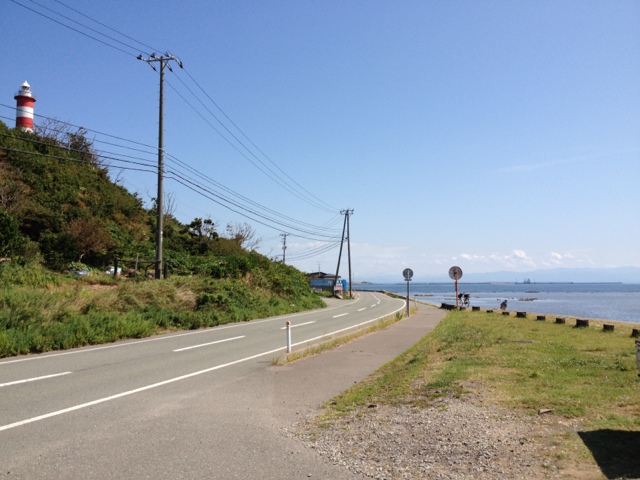