** Note: As astute readers may have noted this post and those that follow are from last week. Internet access remains nonexistent at Green House A, and I'm still stealing wifi when I'm at the Board of Education, which is now rarely. Bear with me as I struggle to upload my posts according to some semblance of a schedule!**

Another gap of several days off the Internet, and I return with tales to tell. Events transpire slowly in Japanese organizations1 but momentum is building for sure. Beginning Monday, I've been assigned to spend a week of live training observing Kenny in action, one of the final steps before being let into the classroom myself. Marking the end of my period of introductions at the Board of Education, meanwhile, I was dispatched on Thursday to the Prefectural Public Employee Training Complex2 for yet another bout of overnight orientation.3

Friday, too, proved to be a critical milestone for my induction into the local school system as Stephanie and I were feted at a school board enkai, or drinking party, where, after being made to give an impromptu speech of thanks for my appointment and hope for the year ahead4 we were plied with experts-only seafood5 and heroic quantities of alcohol.6 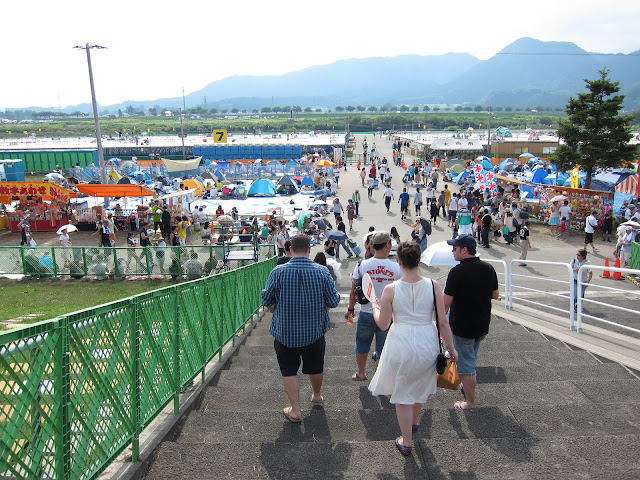 Saturday took me out in search of more summer fireworks-- this time 2 hours down local lines to the Ōmagari Fireworks Festival, pitched as Japan's largest fireworks show, and a forum for the nation's finest makers of fireworks to show off their newest creations in front of a live audience of 100,000. That Ōmagari's non-festival population is less than 25,000 should give you some idea of the scale of the undertaking, which began7 late in the sweltering afternoon8 with “daylight fireworks” (huge mortars that deployed sparklers and multi-colored smoke bombs floating on parachutes) and carried on late into the night with the usual earth-shaking, color-shifting pyrotechnics and eccentric musical accompaniment9. 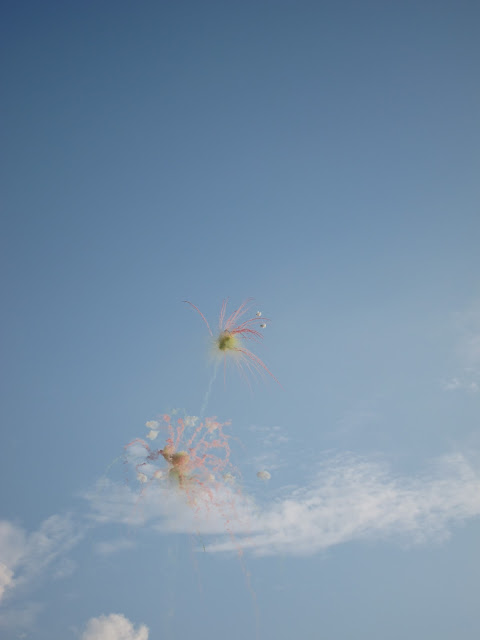 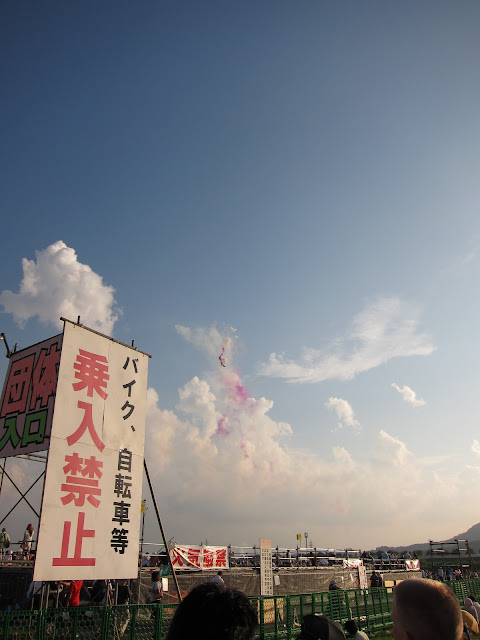 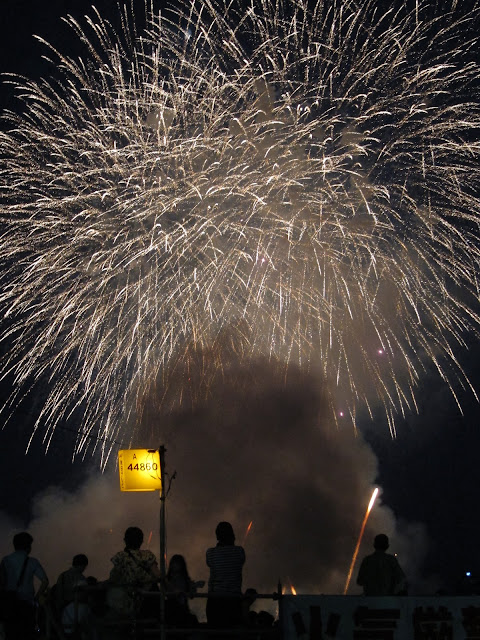 A fantastic show-- even considering that a mixup in the return plans I'd made with Kenny combined with the snarled shuttle trains out of Ōmagari that night to get me back into Akita Station at midnight, alone and much too late to make the night's final train back to Oga. As it transpired, I was forced instead to spend 20 bucks on a sleepless night in Comic Buster, Akita Station's combined manga reading room and internet cafe.

It took many an Oronamin C Sunday morning before I had genki hatsuratsu'ed my brain into a fit state to complete the final planned event for the weekend-- an excursion to finalize the purchase of a car, the last of the Necessities of Oga Life. The Board of Education seems to have exerted itself in providing car-hunting assistance on my behalf-- rather than merely telling me to go shopping on my own, the BoE called around before my arrival to used car lots in the area and found a vehicle and a dealer that struck them as good.

Prices (even on cars-- I was warned not to insult the dealership by shamelessly haggling) are fixed in Japan, and I can't find any actual Edmunds-style used car valuation websites, but the research I was able to do using stolen Geology Museum wi-fi suggests that the BoE and the dealership both did quite right by me.

In the end, the car I was shown, (and provided a slim dossier on) was a reasonably priced and nearly rust-free silver 2005 Toyota Corolla with low mileage, fake burlwood accents, a built-in toll-fare paying credit-card reader, and a unique feature that, (like excess locks on an apartment's front door), was surely meant to reassure but somehow made me more anxious-- four-wheel drive.10 Having already seen the narrow, steep roads that I'd be taking (rain or shine or snow11) to reach several of my schools, the fact that a market exists in this region for small passenger sedans with 4wd12 only reinforced my building Winter Driving Dread.

Ostensibly because the vehicle had no number plate, I was not actually permitted to test drive the car beyond a quick trip around the parking lot-- but I was allowed to have the car put on a lift, and personally inspect its underbody for rust and damage. There being no apparent problems with either my quick parking lot jaunt, or the car's underside, I decided to buy the Corolla-- only to be reminded, yet again, of how far I was from home when the actual contract-signing process was delayed for 3 ½ hours by much hemming and hawing about the appropriate rendition and ordering of my middle name!13 On the one hand, the wait was made less interminable by the continuous attention of what seemed to be a dealership employee whose sole job it was to serve potential car buyers an endless supply of mocha-flavored chocolate milk, tea and cookies.14 On the other hand, my word as a foreigner being considered inadequate to purchase used vehicles, the process was further lengthened by more forms that Ms. Furuyama was also required to countersign for me as a guarantor (two cheers for xenophobia!) Cash and carry this was not-- in the end, in fact, I was told that I'd next see my new vehicle in 3 weeks15, when the car's new number plate (and my official certificate from the police that I possessed a parking spot) was complete.

But in the end, all went well, and I went to bed early on Sunday, exhausted and newly in hock to Toyota Financing of Akita but, at long last, just about to get my first chance to stand at the head of a Japanese classroom.
1The general Japanese tendency towards recondite bureaucracy is, of course legendary, and my JET assignment is poised to push me further into the nebulous Sargasso of official paperwork than ever before. In particular, I've over the past week become deeply becalmed on the route to a home Internet connection by a foul-up between the national phone company, NTT, and my ISP here in Oga-- or so I am informed by the agent of Yahoo Broadband who summoned me, fresh from the bathtub, late on Thursday to ask me to confirm my personal information with NTT before my application could proceed. (The catch: It is impossible to complete this process outside of restricted banking hours, or from any phone other than my home!). There is a plus side: This being Japan, the bad news was delivered using only the finest-pitched respect language, and in a sugary, ingenuous tone of voice that is otherwise the preserve of robot cats. If it will take 4 weeks of irritating paperwork to get Internet, at least I'll get to imagine my customer service representatives' fluffy ears twitching obsequiously all the while. Hang in there with me, readers.
2A sprawling complex of late International Style cement, incorporating a 4-story dormitory (nearly unoccupied except for our group of JETs) with its own public bath, cafeteria and conference center, a satellite campus of Akita Prefectural University, a high school for the disabled, and an outpost of the prefectural education department.
3At which Kenny made an excellent presentation on teaching techniques for middle-schoolers, and we were warned again about Japan's harsh drink-driving regime (bringing the minimum number of times we've been warned to at least 20. as well as a multi-drug resistant strain of chlamydia recently detected in circulation. Oh, great.
4It was taken for granted that I would perform in Japanese, which I took to be an honor. I took my audience's frowns of concentration as a reminder that my own command of keigo remains stumbling at best.
5For your reference, with select examples from the meal:

I've also been told to look forward to being fed whole gravid hatahata, one of Oga's famed local fish (my dictionary gives only the generic “a type of sandfish” and the scientific name Arctoscopus japonicus) when another drinking party welcomes the end of the fall term at Christmas. If I heard right, though, hatahata (and their eggsacs) are considered way better fermented. For (not) the first time I'm hoping I made a mistake in translation...
6A proud tradition of the enkai, designed to permit the kind of barrier-free chat and reciprocal glass-filling between superiors and subordinates encapsulated in the charming Japanese-English word nomiyuunikeishon (“Drinking-communication”)-- as well as, in this instance, to facilitate a less-than-covert test of my manhood on the part of my supervisors. I seem fortunately to have been judged worthy without being forced to the extreme lengths of drunkenness reported by some former JETs (numerous stories circulate about unspecified friends of friends who woke up in the office tea-lady's bed after their welcome enkai), though nearby objects did begin to leap out most inconveniently at me when I moved around the room. Always remember to drink responsibly, folks!
7But not before what sounded like a small crowd of Buddhist and Shinto clerics was brought in to bless the fireworks while the volunteer fire brigade was busy wetting down the grass around the launch point. I say “sounded” because for some unknowable reason the actual ceremony was carried out well out of sight of the audience, behind the protective berm, and so far out of earshot that I was only just able to recognize two well-known Shinto invocations and a mid-length version of the Prajñāpāramitā Sūtra being chanted.
8The temperature was helpfully announced over the PA every fifteen minutes or so-- which is how I can tell you that it peaked shortly after 2:30 PM at 33 degrees with 76.1% humidity.
9Mid-50s swing music freely intermixed with Japanese festival fife-and-drummery and dubstep remixes of well-known Disney theme songs, the latter almost certainly unlicensed.
10They threw in snow tires in the deal as well. I appreciate the gesture.
11Snow days being almost unknown in Japan as most students live quite near their schools and hence only the teachers (who are expected to sacrifice for everyone's behalf) must risk their lives while driving in to work.
12And not just Corollas either. When I looked in the Board of Education's parking lot, not a single car in the place was 2wd, all the way down to the compacts. One of the office staff, a wee slip of a thing, actually drives a lifted Toyota Land Cruiser that could comfortably seat 8, and would probably make it across the wind-sculpted carbon-dioxide snowdrifts of polar Mars. How bad is the winter in Oga, really?
13Japanese names do not have this “exotic” feature and consequently their bills of sale, loan papers, and other triplicate-filed forms do not either. Along the way to actually getting the papers signed and filed (and not just spindled and destroyed as “mistaken” like the first 4 copies), I was also made to explain the concept of the British double-barreled name, and “Junior”. So this is what they were talking about when we were exhorted to be cultural ambassadors at that Embassy party...
14I exaggerate slightly. The same woman was later on hand to offer me my signing bonus for the financing: a Corolla-branded file folder, a matchbox model of my new car, and, of all things, an insulated Doraemon lunchbox.
15In the meantime, I'm working on names for her. Kanji puns, of course, are foremost in my mind.
Posted by -D at 8:29 PM