My Kind of Weekend, Part II

Once the movable feasts got going, they kept moving: For the next 5 nights, Kenny, Stephanie, Fumie, a motley crew of other area JETs, and I chased old-calendar New Years' festivals back and forth across the prefecture, evening work and weather be damned.

Next in queue was the Kariwano Tug-of-War Festival, an easy hour and a half from Oga-- and, like many of the other area events, in the form of an easy-going competition. Divided into two teams with the names of now-defunct neighborhoods and colored Red and Yellow, the village pulls for the thrill of victory and to determine the result of the coming year's rice planting season. (1) Now, a village-wide tug-of-war calls for a big rope...

Made of rice straw and festooned with dozens of extra lateral ropes for the teams to grab, the immense cable was as big around as a man and extended well outside of the "official" festival area, in the midpoint of the village's main street. As we walked through a shower of increasingly chunky frozen rain towards the far-off sound of canned flute music and the smell of fried festival food, we were accosted by several younger festival-goers: 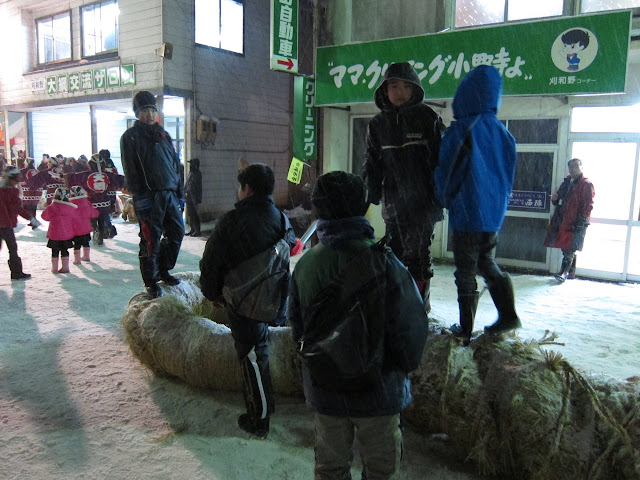 <Wow, foreigners! Are you here for the festival?>

<If I wanted to participate, what would I have to do?>

Assuming my Japanese had let me down, I gave it another shot:

Was it really that simple? The explanatory PA was helpfully announcing a brief break before the beginning of festivities in earnest, so with time to spare we went to scope out the food stands. 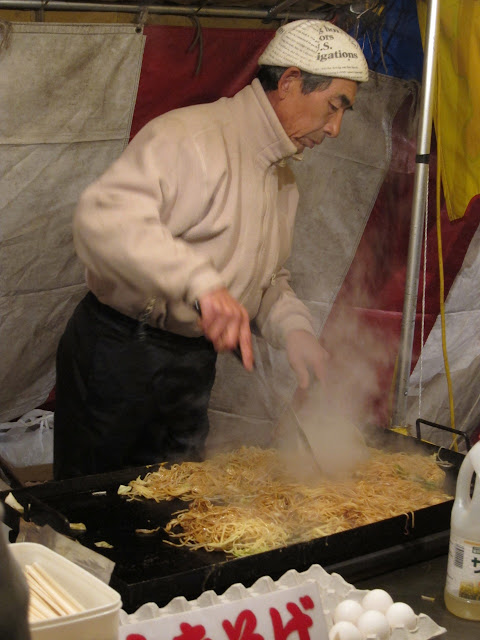 Staff manning the nearby free sake tent assured me, straining a bit to be heard over the pulsating polyrhythms of the local middle-school taiko team, that we were welcome to join in with the pulling.

<Have you picked a side?>

<You should just stay over here and work for us then!> 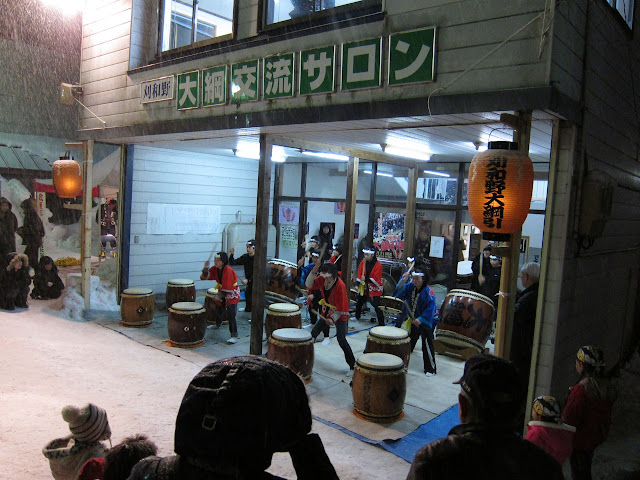 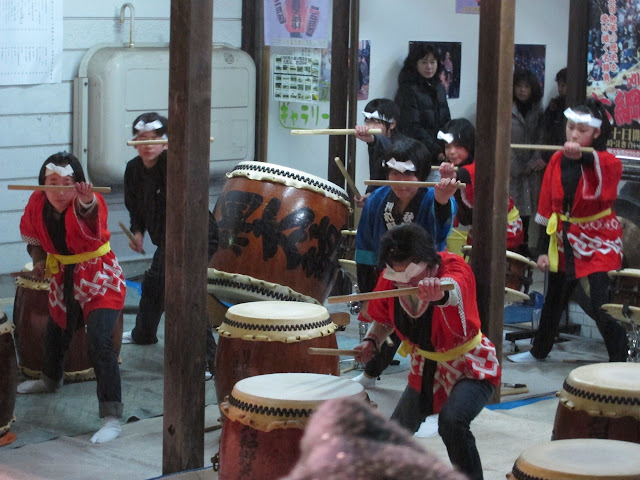 From where we stood by the festival tent, I could see the preparations in more detail:

Unbelievably, the immense rope was in two sections, with the Yellow Team's side (now, apparently, my side) a plain end and Red's terminating in a eyesplice large enough to crawl through. Before the competition, there'd have to be a knot tied. But first, the warmup act. Two groups of men, dressed  as Red and Yellow team representatives (2) in headbands, baggy pants, and happi began gathering between the untied ends.

<AND NOW, THE JOSTLING (押し合い/oshiai）WILL BEGIN!> announced the PA.

To dialect chants of "JOISA, JOISA" (3) tougher-looking members of the sides strutted towards each other, grappled a bit, and began pushing back and forth while jumping up and down. First in trickles, then in waves, each side's guys ran towards the building knot. Then, when conditions seemed right, one or more guys would make a run at the pile, clamber on top of the mass, and wave for a lantern emblazoned with their teams' name. Spurring the crowd they were surfing on to greater efforts, the riders waved their arms and tried their best to keep their tippy seats. Before long, they fell, the crowd dispersed-- and then someone else danced out into the middle. 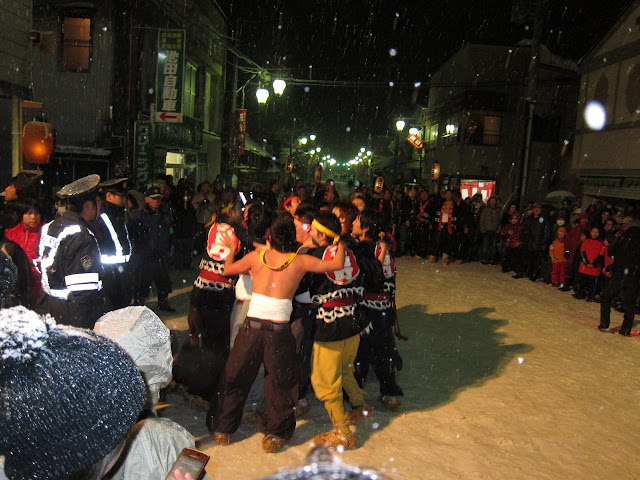 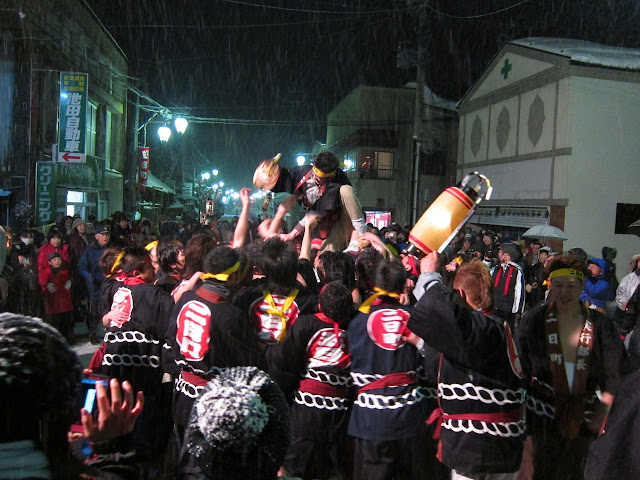 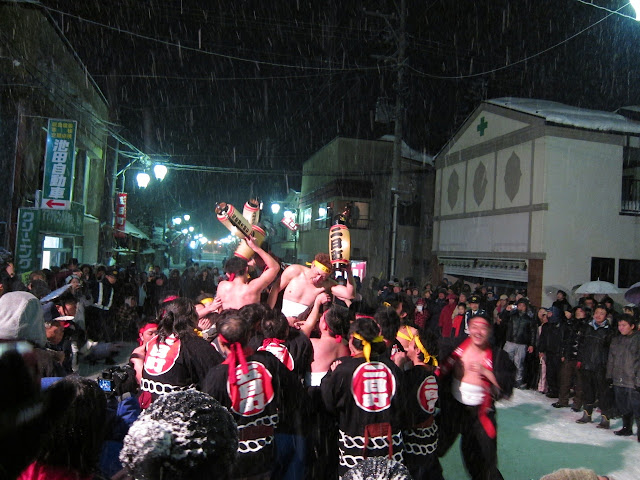 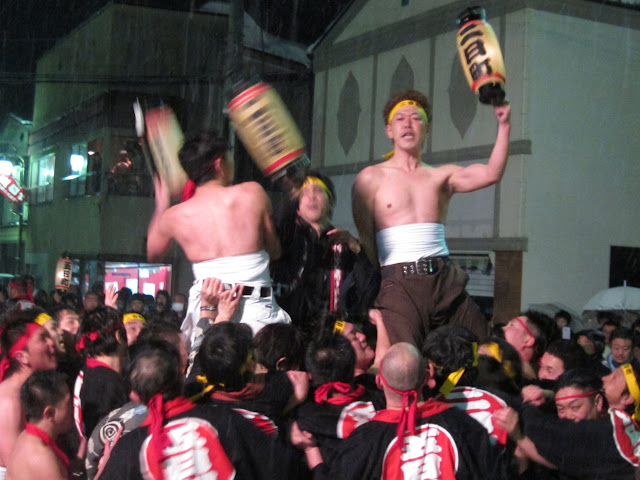 It looked much more like goofy fun and less like an actual competition-- so much that Kenny and I, standing on the edge of the crowd on the Yellow side, began debating with increasingly serious intent  whether it'd be all right to jump in. Just then, I felt a push from behind. The guy from the sake tent had his hand on my shoulder.

We didn't need another invitation. Kenny and I tossed off our coats and dove headlong into the steaming scrum, yelling "JOISA" in time.  Somewhere along the line Kenny took a glancing elbow to the nose and I ended up in the stinking center of the mass, supporting the full weight of one of the lantern guys's butts with my face. Needless to say, it was a blast.

An indeterminate, sweaty, yelly interval later, the PA announced the end of the oshiai, and, high-fiving our comrades, we retreated to the sidelines. With the warmup finished, it was time to hook up and pull. 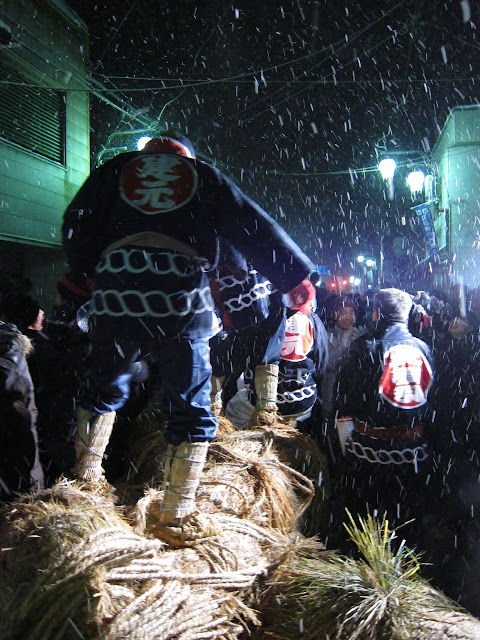 And pull we did, when at last the time came. It had seemed almost unbelievable, even with half the town pulling each end, that the huge rope would move at all, but once each side (4) got their backs into it, the huge cable came alive, leaping inches off the ground as we strained in time to the marshals' chants of <YOI.... SHOOO! YOOI.... SHOOO!> (READY, PULL! ). We strained for a few moments in the middle, me leaning my full weight into the 2-inch horizontal hawser I was sharing with a foursome of coutured Korean tourists, Kenny dragging his feet into the ice to get a better grip. We grunted back and forth for half a minute as my hands began to lose their grip on the slick rope. Behind me I could hear straining in three or four languages. Then, in spite of it all, the advantage slipped. Korean noises of surprise told me the pullrope had parted, dropping the girls from Seoul on their designer-jacketed butts. Kenny lost his footing and slid feet-first through the muddy slush trying to right  himself. A triumphant shout rose from the Red Team as it pulled itself into a patch of ice-free tarmac down the road, and redoubled its efforts.

In the end we never did manage to get the momentum back, and Red dragged us more than 100 meters up the road as if it were nothing. But, backs sore as we high-fived through the crowd back to our car, it felt like a fantastic victory.

(1) No matter who wins the result is good fortune. If one side wins, the year's yield is good; if the other side does, the price merchants pay for the crop will rise. Almost like they were trying to game the system!

(2) Or like medieval workmen itching for a fight-- bare-chested in the cold, many wore strips of cloth called sarashi wound round their middles-- a practice that Edo-period brawlers took up to protect against slashes to the gut, and present day gangster-movie yakuza and tough-guy anime characters still affect. Incidentally, the same binding cloths also were instrumental in creating the flat-chested ideal kimono body of the premodern era. I'm afraid you get no points for effort if you guessed that innumerable period dramas play both facts off each other to create beautiful Sweet Polly Oliver/Huā Mùlán/ Nakano Takeko warrior princesses who mysteriously find the need to fight in their old-timey underwear...

(3) Or something like that. Not even the folks I asked in the crowd could tell me what it meant exactly. Consensus suggested <良いさ、良いさ> / Yoisa!, Yoisa!/ GOOD!, GOOD!, as a possible antecedent... which suggests some interesting connections.