My Kind of Weekend

Owing to 19th century calendar reforms, the 25th regnal year of the Heisei Emperor officially began on January 1st, but out here in the provinces, the festal calendar is more closely tied to the Chinese calendar than the Gregorian. Lucky for me, Lunar New Year fell on a three-day weekend in this Year of the Snake, leaving me plenty of time to get out to the first of Akita's many midwinter festivals.

First on the docket: A Saturday night visit to the namahage's second yearly appearance, the 柴灯祭／りSedo Matsuri.

Although their yearly work of scaring the dickens out of local children is long done, having been moved to Gregorian New Years', the namahage of Oga also make a yearly visit to the mountain shrine at Shinzan, the official "center" of namahage activity, torches (柴灯/sedo) (1) in hand, in order to mug for the cameras of tourists from far and wide. Along with Kenny, Stephanie, and a gaggle of our acquaintances from Akita City, I went to check out the festivities. 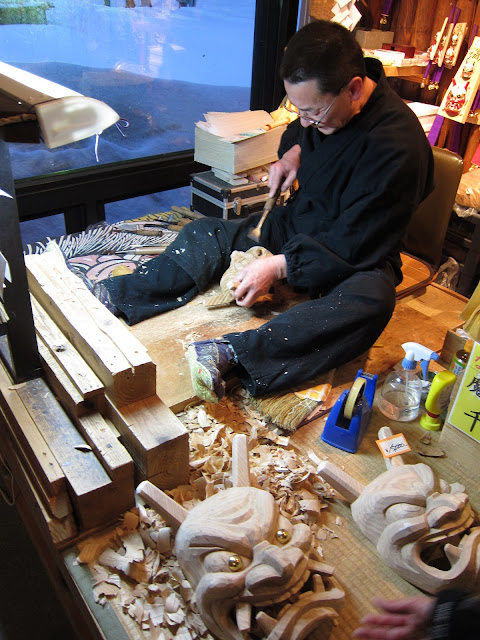 At the Namahage Museum next door, a live demo of mask-carving was on. 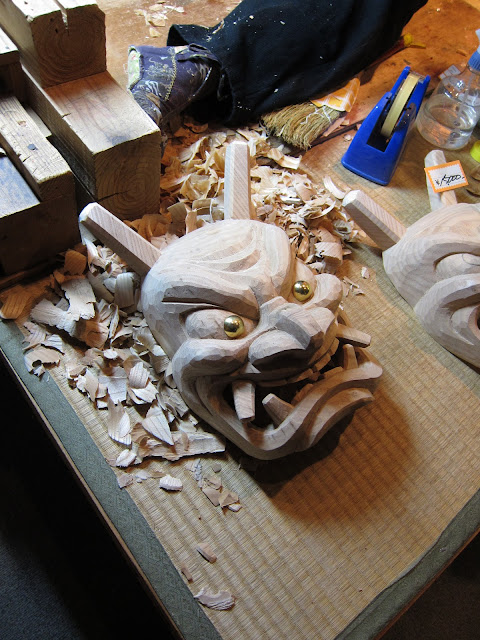 As darkness fell, we headed up the hill to the shrine itself, where braziers had been lit and banners hung to announce the festival. 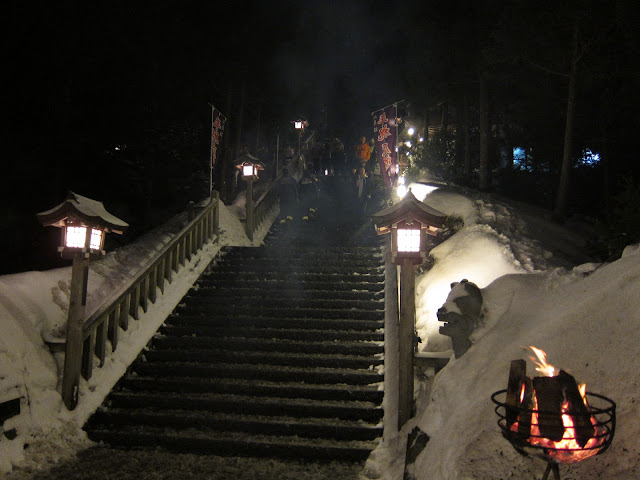 I paused at the top to pay my respects to the mountain gods enshrined in the main hall... 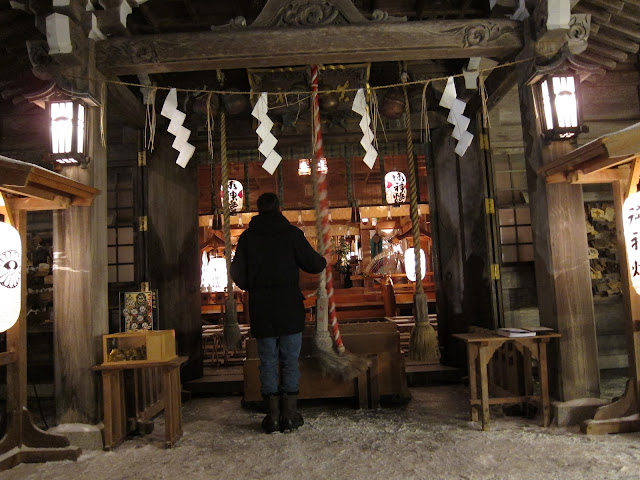 ... and purchase a package of good luck New Years' mochi and a bamboo cup (free refills!) of sanctified sake/ 神酒 (shinshu) from a nearby stall manned by miko. 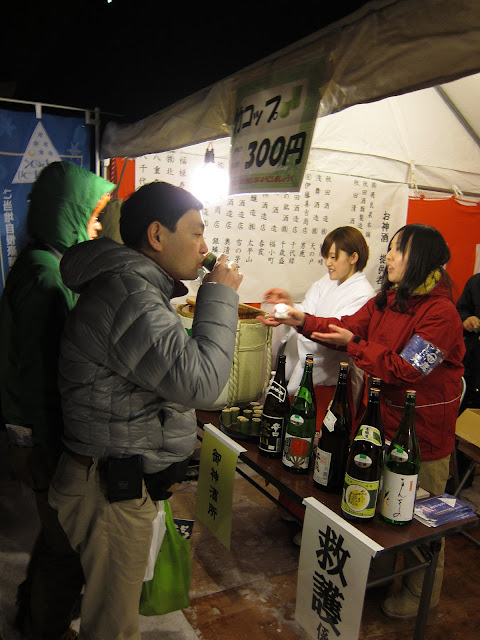 While we waited for the night's "official" namahage to make their appearance, I followed the crowd further into the compound... and found myself at the head of the line for the "Namahage Transformation Corner": 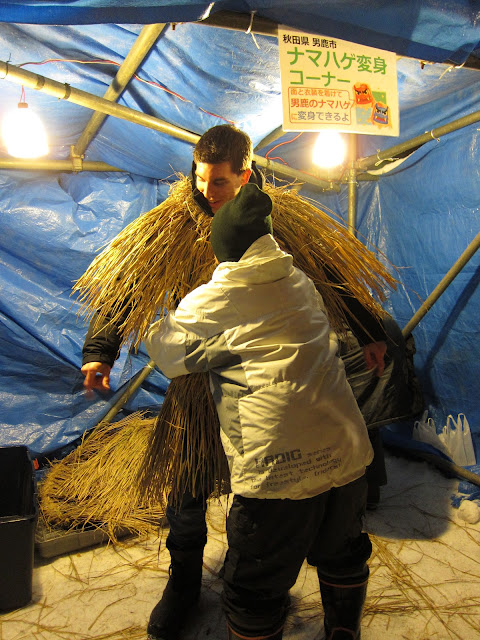 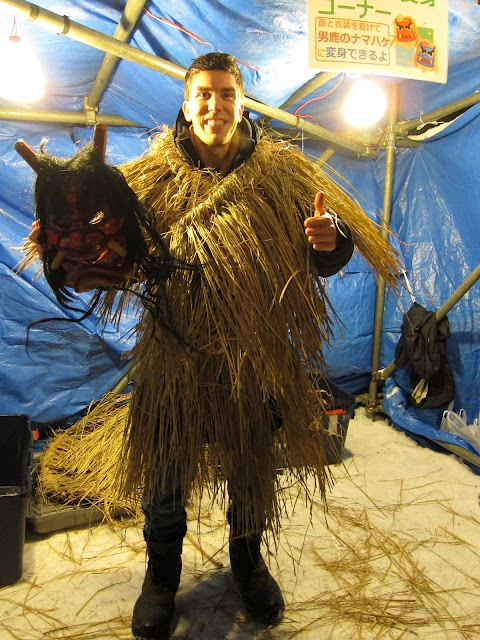 I wasn't out of my borrowed raincape and skirt long when I noticed the crowd packing in around a rope-cordoned (2) space towards the center of the shrine's courtyard. Inside: a gaggle of priests and a miko in full dress, an altar bearing offerings of rice, salt, and fish, and a vigoriously boiling cauldron of water. A portable PA system, set up a semirespectful distance from the enshrined space, crackled into life. (3) <AND NOW>, it intoned, <THE FESTIVAL WILL BEGIN WITH TRADITIONAL RITES AND CEREMONIAL DANCE>.


With things officially underway, the clerics disappeared up the hill above the main shrine. The crowd turned as, lo and behold, from the top of the mountain came men dressed in rain capes, carrying namahage masks and bamboo torches in their hands. Now the PA carried the sounds of the priests as they officially invested the men (入魂, nyuukon, "enter-spirit") with the spirits of the namahage. With a yowl, the men donned their masks, ignited their torches, and stalked back up the hill. While we waited for them to return, the PA helpfully directed us to watch a recreation of the "traditional" visit of namahage to a local home:

followed by a performance by a local taiko drum group, appropriately garbed for the occasion: 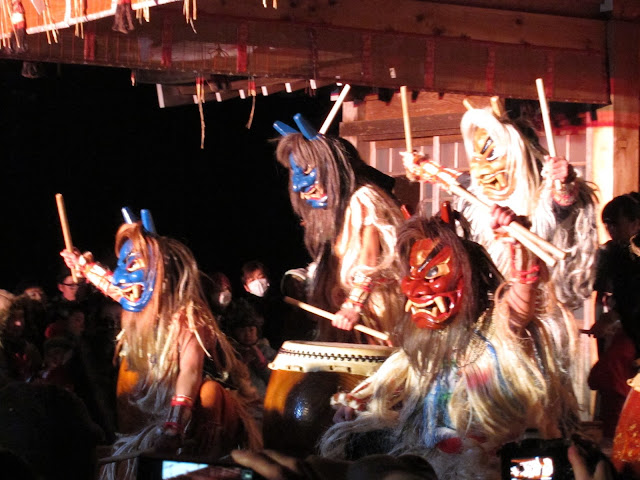 Yells from the top of the hill announced the end of the taiko set. The namahage were descending, fifty in all, representing each village's unique style of masks and equipment. Extinguishing their torches and taking up their knives, buckets, and axes, they descended on the crowd-- with plenty of growling and getting in people's faces of course: 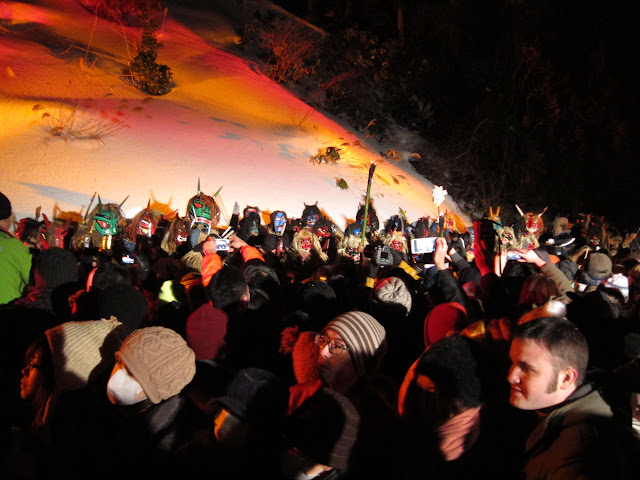 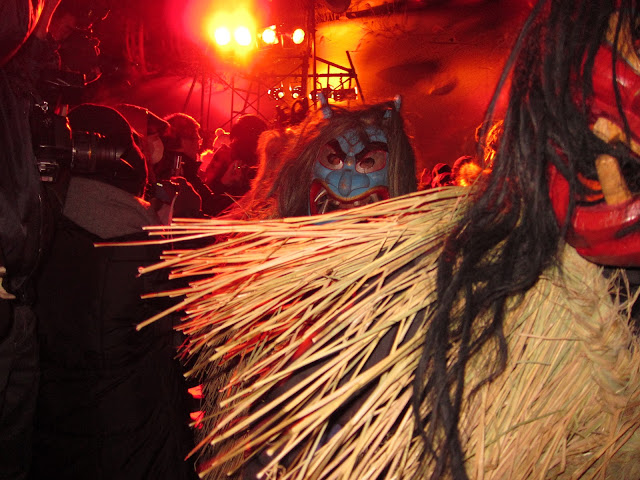 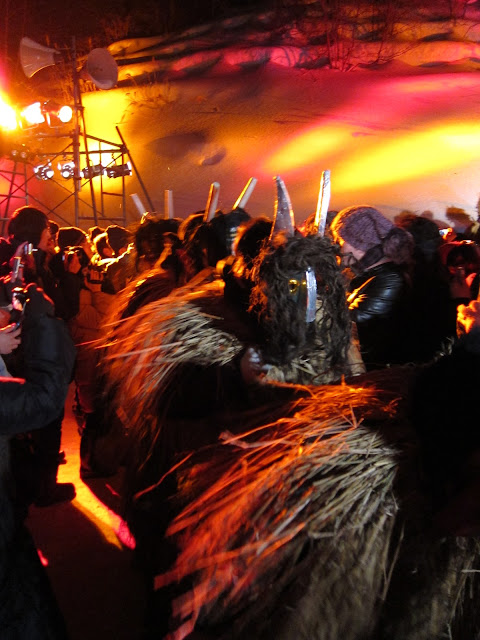 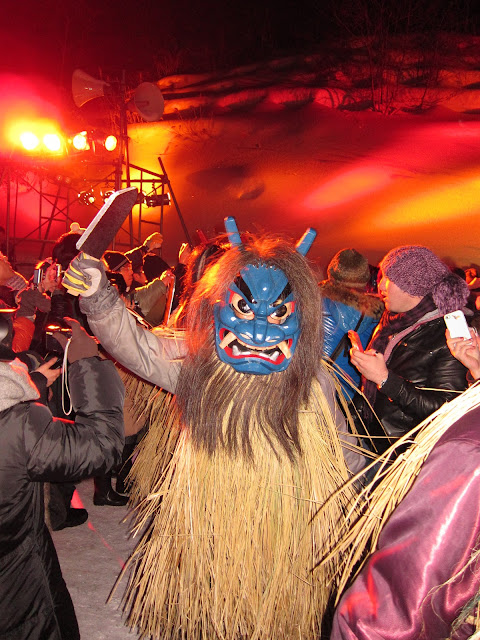 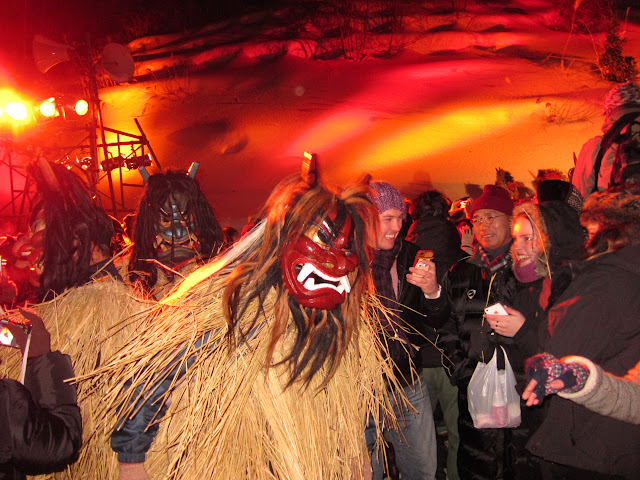 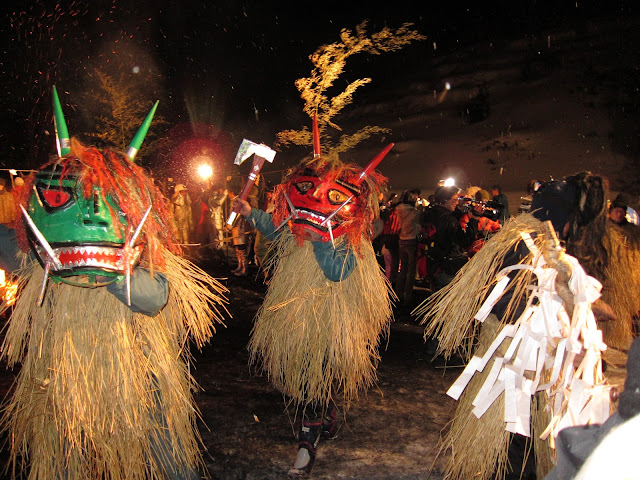 Two of the group peeled off for a dance number:


And then it was time for photos before heading home:

(1) n.b: The more standard term is taimatsu/松明.
(2) And hence ritually purified. The technical term is himorogi.  Cf shimenawa, yorishiro.
(3) It being impossible in this day and age to have a traditional festival in Japan without explanatory comment.