My Kind of Weekend, Part III

Our Wednesday festival took us a little further afield to Kakunodate, known best in fair weather for its 武家屋敷／buke-yashiki "Samurai-house" district, a street or two of the preserved stately homes of 19th century provincial samurai, as well as a lovely municipal walking path along the Hinokinai River that features hundreds of century-old cherry trees and draws crowds in the thousands when the blossoms are at their late peak.


Kakunodate in winter is much less the tourist hub-- but its empty municipal parking lot makes a perfect venue (wide and fireproof) to preserve its traditional midwinter festival, the Hiburi Kamakura.

Why a parking lot? The festival's Japanese name (火振りカマクラ, "Hiburi Kamakura" should tell you all you need to know. Many villages in Akita feature midwinter festivals based on the making of kamakura, or snow houses, and the Hiburi is no exception (though Kakunodate's kamakura are really more like snow lanterns than igloos)... 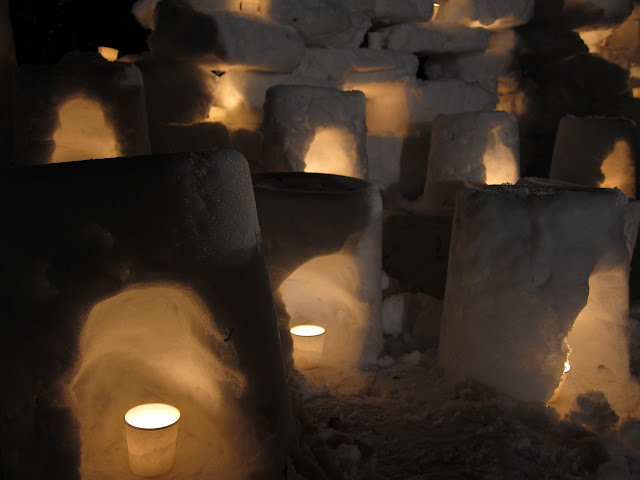 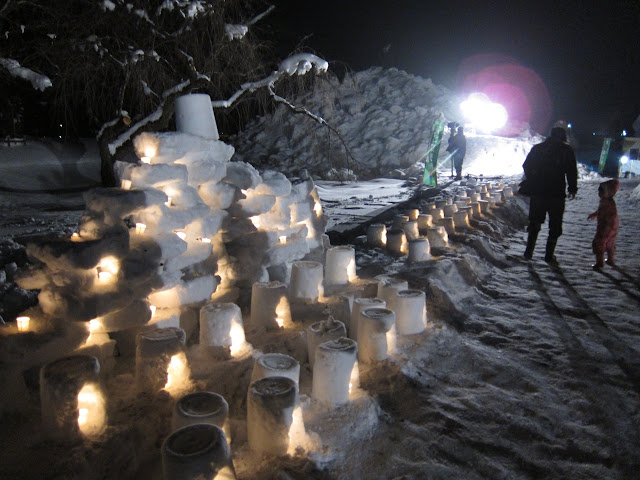 ... but at Kakunodate the main event is unmistakably the hiburi, "fire-swinging". After lighting bundles of rice straw (I've heard them called tenpitsu, 天筆、"heavenly brush") from a bonfire in which the previous year's New Years' decorations have previously been burnt (closing out the old year and removing its misfortunes),  the flaming mass is whirled around in a slow circle, warding off sickness, guaranteeing "the flourishing of the five grains (1)", and flinging chunks of burning straw to the four winds.

We arrived as the fire-swinging was already in full swing, judging by the low-burning bonfire, the festival ground's thick coating of smoking debris, and the phalanx of amateur photographers all trying to get the perfect shot from the same vantage points. 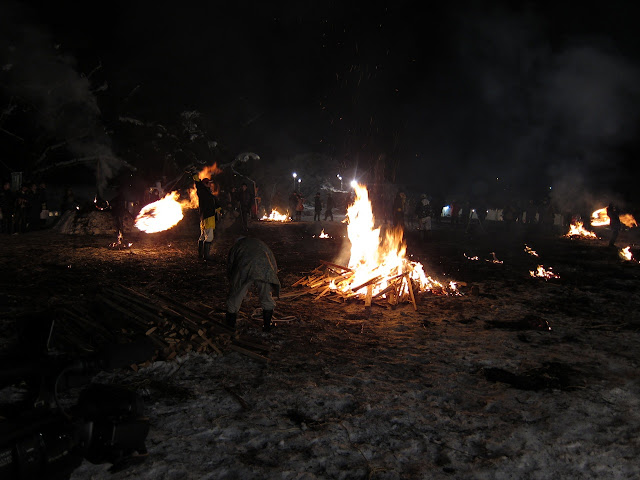 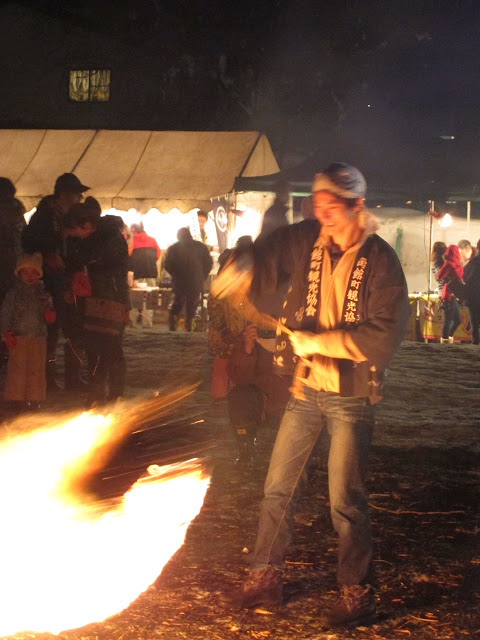 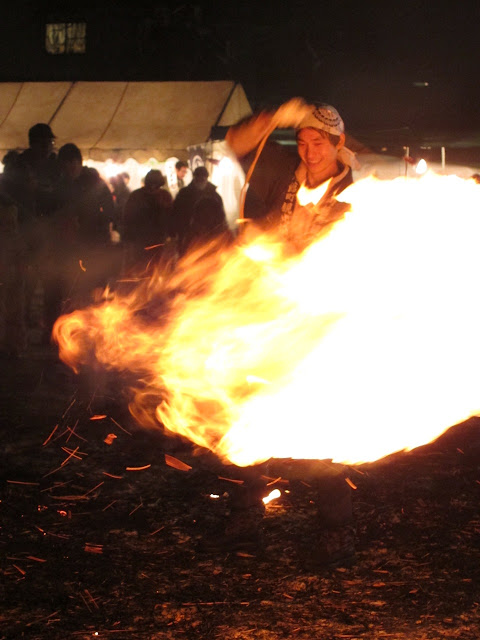 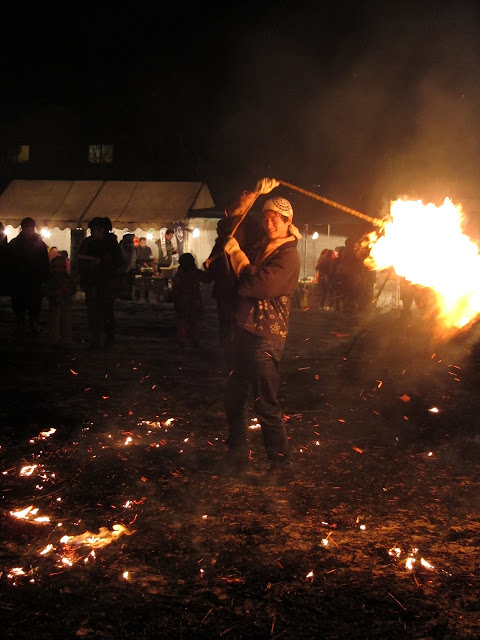 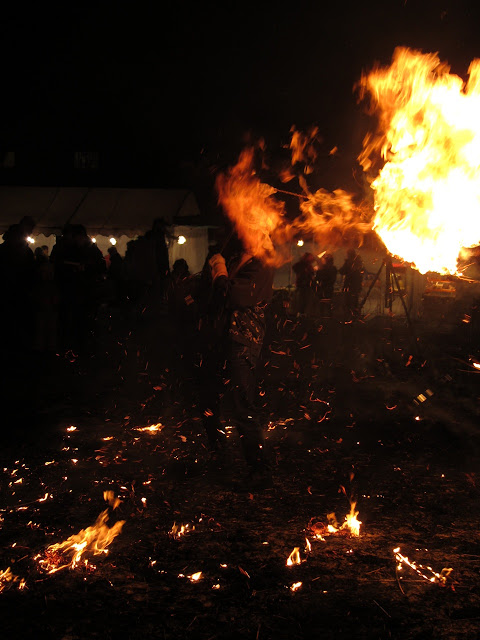 One of the older guys on the verge grabbed my arm as I was just pulling out my camera.

It was easy to smell the beer on his breath, even through the smell of burning rice straw.

Maintaining his firm grip on my arm, the guy marched me over to a pile of pre-roped strawbales.

<Ah, this guy wants to try. Seems he's a foreigner.>

<Ah, well, I guess you can tell just by looking, can't you! >, I said, as graciously as possible.

Apparently convinced by this token that if foreign, I was at least able to speak normally, the straw monitor handed me a bale and began herding me into the middle of the arena. Out of the corner of my eye, I could see the photographers nearest me busily adjusting their settings. Now THIS was the shot they had been waiting for, it seemed. <OK, hold the end of the rope, light the end of the bale, and swing slowly!> Feeling slightly rueful that I wouldn't have the chance to get any photos of the moment off of the hundreds of be-vested retiree hobbyists with midlife crises' worth of fast telephotos now trained on me, I began swinging the burning straw round myself. <Perfect, perfect, just like that... no, too fast!>, the monitor instructed me, standing just outside of my swinging arc. Even on a two-meter rope, the heat and light from the bale was impressive. It was a bummer when after only about ten or eleven swings, my tenpitsu disintegrated, flinging smoking ash in the direction of some of the more intrepid photogs. <HERE TAKE ROPE> yelled the tipsy farmer. "NO... SICK... YEAR".

<They took a ton of pictures of you>, said Fumie doubtfully as I walked back towards the edge of the swinging area. <I wish I could do it again so I could get someone to take some pictures of me-->

<DEAR VISITORS, FOR THE SAKE OF EVERYONE'S ENJOYMENT OF THE FESTIVAL, PLEASE ONLY SWING ONE BALE. WE ARE RUNNING LOW ON BALES!> --- interrupted the PA.

<Oh well, I guess I can get pictures of Kenny at least>.

And indeed I did:

"HEY, KENNY!" someone called in English. A passel of Akita City ALTs were crossing the Swinging Area, dressed in blue happis and headscarves marked KAKUNODATE CITY TOURISM ASSOCIATION. "Where did you get those outfits?" asked Kenny. --"Where did you get the straw? You have to pay 500 yen and borrow the clothes before they let you do it!" "Looks like we just got the gaijin discount over here!" I said. Behind us, an older fellow lit up a bale while holding his young grandson. 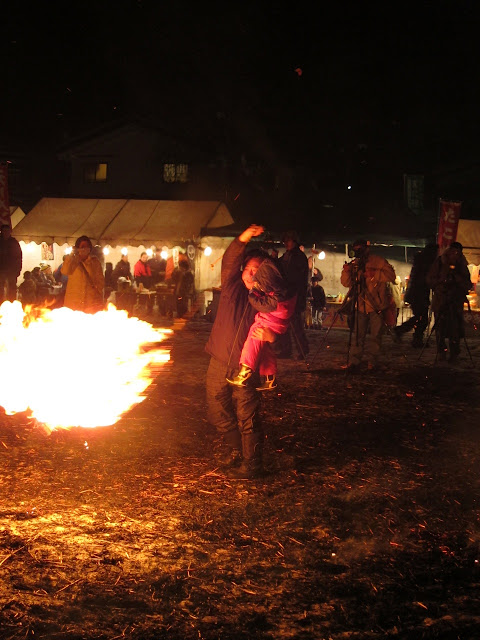 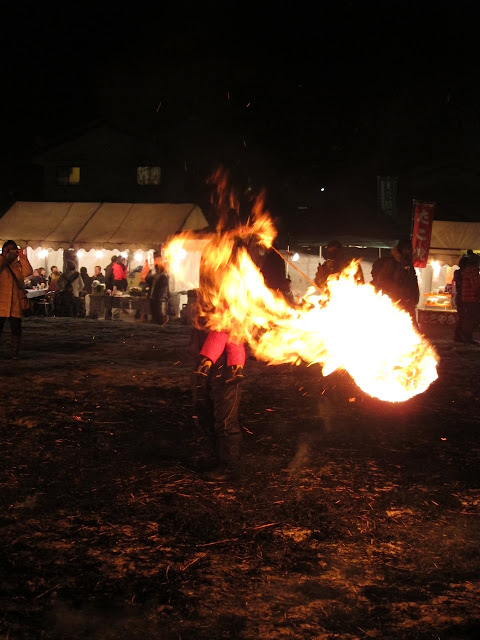 <ATTENTION: THERE ARE ONLY 2 BALES LEFT. GUESTS WHO HAVE NOT YET PARTICIPATED: PLEASE TAKE THIS OPPORTUNITY TO DO SO! BUT PLEASE STAY FOR THE CONCLUSION, FEATURING WINTER FIREWORKS!> announced the PA.

"I'm gonna get another bale!" said Kenny, striking off towards the other side of the arena. And wouldn't you know it, he pulled it off. 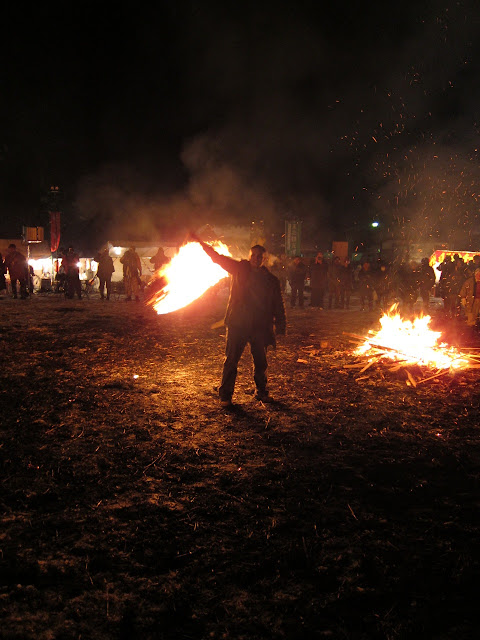 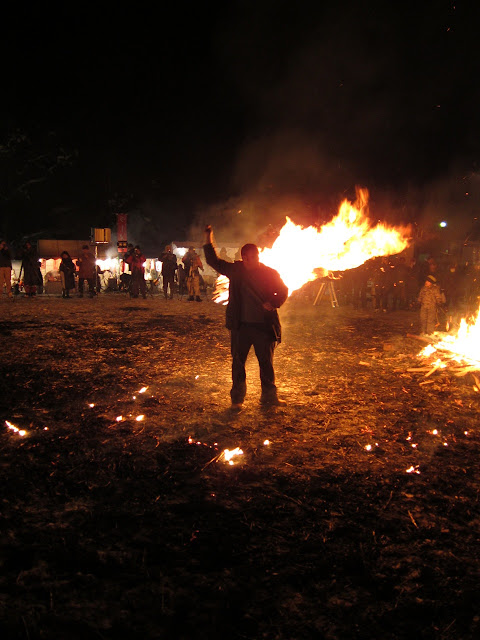 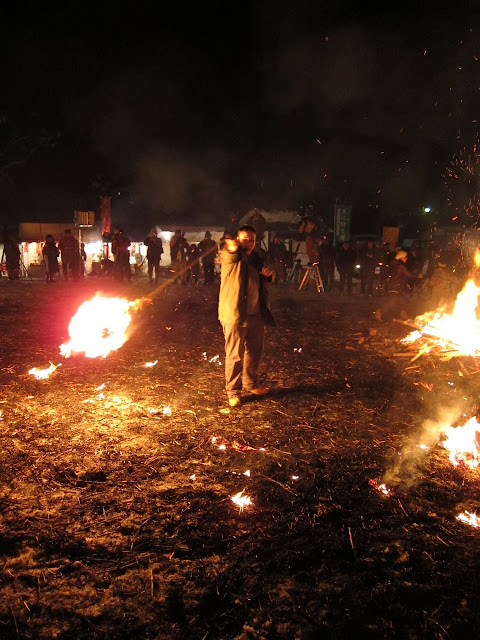 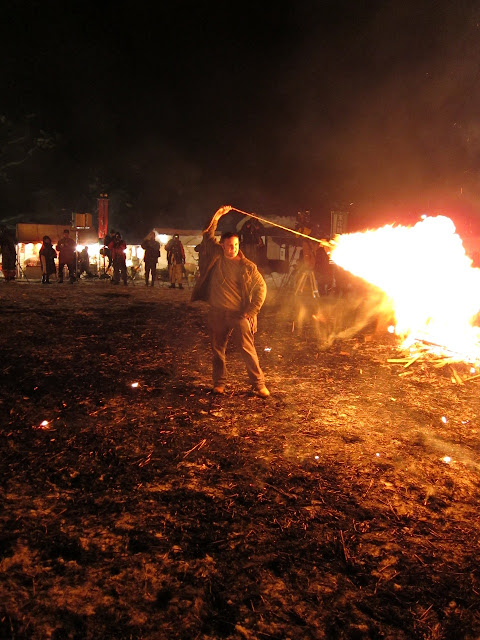 I had enough time while the last bales burned to eat a food-stand okonomiyaki and have a good go at talking with strangers, including a garrulous local ex-teacher, who was practically only kept from talking to me all night about the local homestay program he'd organized by the start of the finale fireworks. 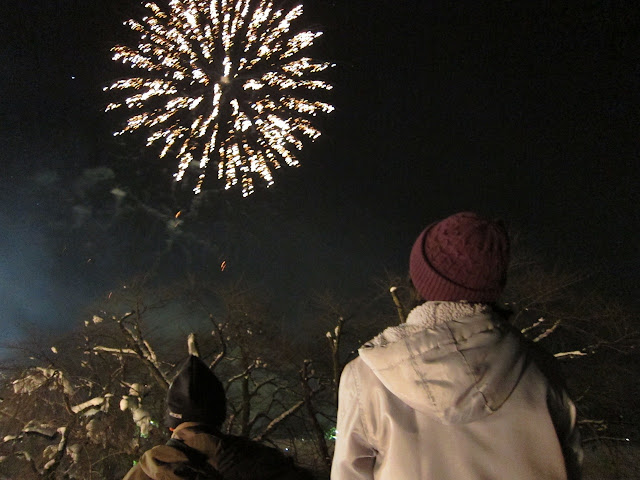 And then we headed for home with fried food in our bellies and burnt straw in our hair.

(1) Those are wheat, rice, beans, and millet [there are two kinds of millet, awa and kibi] for those of you playing along. Though their practical significance to Asian (Chinese and later Japanese/Korean) society is obvious, their ritual significance was also such that abstaining from eating them, and so metaphorically partaking not of the "common world", played an important role in various premodern ascetic practices.
Posted by -D at 8:20 AM