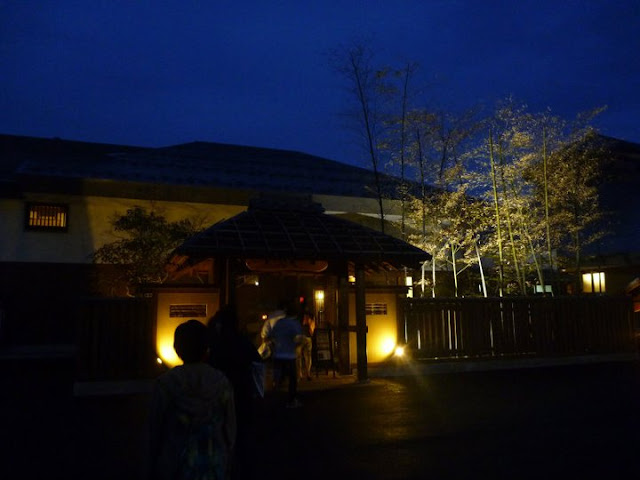 As a cloudy twilight settled over Hirosaki, and our fish-on-stick lunches started to wear off, we trooped back to the central station, looking for a commuter train that would take us out to a public hot-spring bath, or onsen, on the rural verge of town. Posted schedules in the station noted that as a power-saving measure, all lines had been moved to restricted operations-- the last train would leave Hirosaki at 9:30. I was surprised, once we got underway, that the line was running at all. We were the only passengers on a two-car affair of such obvious vintage that Kazuma and Shugo joked half-seriously about <How nostalgic!> the weathered interior of the empty train looked. 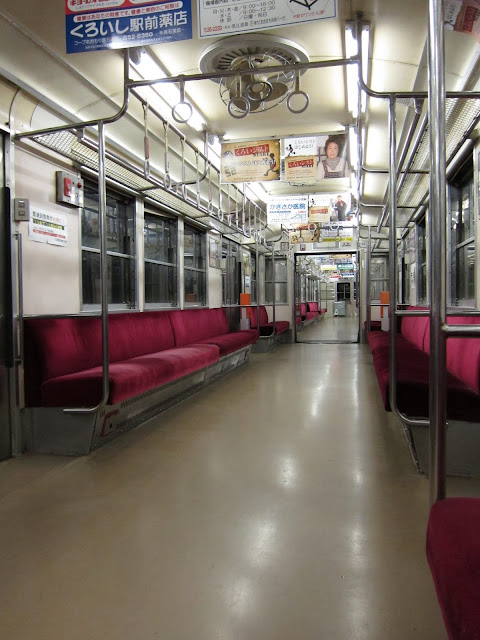 I had to agree, though for me the experience was less of nostalgia and more of overpowering deja vu. A nation with a rail network naturally makes movies and TV shows aplenty with scenes on trains, and now, riding in a strangely familiar carriage through the gathering darkness, the train passing over ink-black flooded paddy fields as if parting a shallow sea, I felt weirdly as if we were riding towards a a third-act plot resolution rather than an ordinary public spa. We were quite far out from the city now. How far, I wondered, would we have to walk from the station at this rate?

We arrived-- at a tiny, unmanned whistle-stop with bicycle parking only-- and walked up a narrow road, squeezing ourselves as close as we dared to the meter-deep irrigation channels on either side when cars passed.

Before long, the onsen itself came into view-- a low complex of tile-roofed buildings that looked to have been recently renovated. Shugo was pleased to see that among the new additions since his high-school days was a shishi-odoshi, a bamboo fountain feature that prompted another burst of <Nostalgia!> among us. For my part, I was happy to have the name recalled to mind before I had to ask what the <Thing That Goes Doink> was named in Japanese.

The lobby was larger than I had expected, featuring a largish drink-and snack stand (traditional for after-bath refreshment) and a mood-lit reception desk. Here we exchanged our shoe-locker keys for another set of clothes-locker keys and received a small bag containing two towels-- a face towel/washcloth for around-bath use, and a larger body towel. So far so good.


Onsen, like trains, Shinto shrines, and sushi,  enjoy rather thorough coverage in Western sources as one of those Great Traditions that one should Carefully Prepare To Experience so as not to Look Like A Total Doofus. So far, everything lined up with my expectations, so I was surprised when, just outside the locker room, Shugo tapped my shoulder.

<Err, is there something I should be careful of? I already know the rules... shower first, then get in, and all that...>

<Oh, good! Err, it's just that one of the exchange kids I took here last year kind of freaked out.>

"Nothing, it's just that we're all gonna be naked, and that if you see anyone washing anyone else's back, it's not gay."

"I kind of figured that went without saying."

And so, to make a long story short, I walked into a locker room full of Japanese men of all ages and states of undress, took off all of my clothes, and, as nonchalant as one can be in that state, walked in to hit the baths.

Chalk another one up on the growing Reputedly Excellent Japanese Things That Live Up To The Hype tally. The guy's side alone turned out to possess a bank of car-wash grade showers, two saunas, three neck-deep pools, their heat calibrated nicely from hypothermic to "lobster boil", a fabulous 'relaxation corner' in which one could prop one's head against a wooden headrest and lie, eyes closed, on a warm slate floor in a half-inch of warm, flowing water (feels even better than it sounds), and as a bonus, a semi-enclosed outside bath, or rotenburo, in which I spent the majority of the next two hours, shooting bull with the guys and enjoying the contrast between perilously hot water and chilly evening air.

We had to run back to the station in the dark to make our train, but I can state with certainty that I was far, far too relaxed to be bothered. 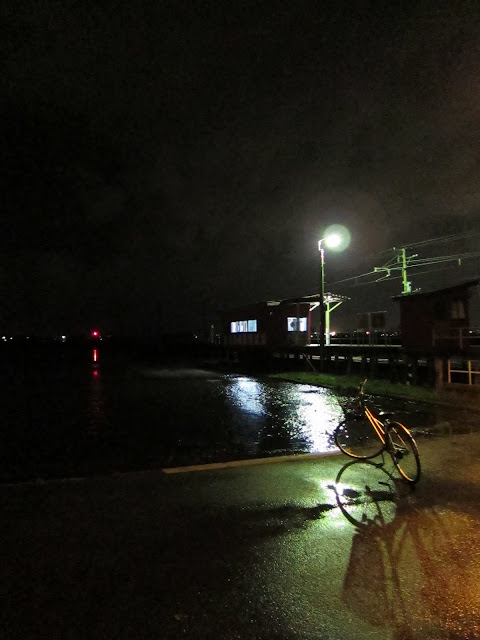 And naturally, I didn't object in the least to hitting an izakaya, a hybrid restaurant/pub, on the way back to our hotel for a late group dinner party. 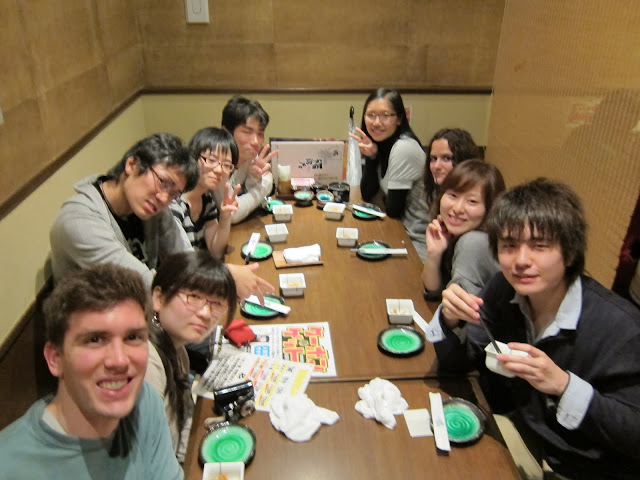 By the time we'd finished sharing an astonishing list of unusual bar eats (chicken cubes with edible bones in, anyone?) and the drinks to go with them, it was well after midnight. We might never have come within a hundred miles of the elevated aesthetics of intransience that evening, but I settled into bed that night feeling indecently content, turning over and over in my head what a damnably civilized day it had been.
Posted by -D at 11:41 AM