I'm winding up a heck of a busy weekend over here-- the best kind. As of Friday,  the last step in my 'official' move to Japan completed with the issuing of my gaikokujin tōroku shōmeisho, which will serve me as a legal ID, residence registration, and, judging by the ominously immense number of variously sized holographic renditions of the Ministry of Justice's official logo that cover the entire face of the document, my official reminder to be on my best behavior. Heavy (though I hear rarely enforced) penalties compel me to carry the card on my person at all times, subject to immediate inspection at the pleasure of the authorities- there to be cross-referenced with the two fingerprints and headshot that the MOJ already has from my entry into this fair land, I presume.  I hear rumors that the UN High Commission on Human Rights looks somewhat askance at the practice, which savors somewhat sourly of xenophobia. Mostly I'm just irritated that I have to turn the thing back in when I check out-- it's got more flashy junk on it than a rare Pokemon card.

So it was that I woke up this morning, and, as my first act as a registered alien, set off to (what else?) get a peek at the traditional ways of local bear hunters.

Though their fame has been somewhat eclipsed by the beauties, rice, and traumatic celebratory traditions produced by their strictly agricultural neighbors, communities of hunters known as Matagi have existed for centuries in Tohoku, trapping marten, fox, and rabbits, and hunting for larger game among the mountains, taking serow, boar, and, most famously, bear. Their descendants are still permitted to hunt in the mountains, and AIU's local outreach club had organized a trip to go and meet a few.


We got up early this morning, bound by bus to the village of Nekko, a speck on the map accessible only by roads of rickshaw-ready width and hilariously terrifying steepness-- like some fantasy-novel hideaway for elves, the town was in fact surrounded on all four sides by steep mountains, and was, I later learned from our guides, in fact locally reputed to have been a hiding place of the similarly legendary Minamoto Yoshitsune. Several times the bus was forced to stop in order for the driver to make the go/no go call on a low-clearance bridge or unusually tight turn. The final hurdle was the tunnel into Nekko itself, a narrow quarter-mile bore that the bus barely fit, despite entirely taking up both lanes. Supposedly the local elementary-schoolers hike through it every day-- if the story's true, the route really is uphill both ways!

We walked to a large whitewashed home on a rise near the edge of town, where we were met by our guides-- three gregarious fellows in their late 60's, dressed for a day outside. As we were being ushered into the front room of the house, I realized several things in quick succession:


1. This was really cool


2. Two of the guys were named Sato, one was a retired school-teacher, the other had been hunting bears for years and kept at it now


3. At least 75% of every utterance made by our hosts was totally incomprehensible to me


In fairness, it looked like I wasn't the only one struggling to understand, judging by the expressions on the faces of my Japanese group-mates. The Satos and Guy 3, whose name I hadn't even caught, were all speaking to us, not in the schooled, officially-sanctioned Japanese of college and the TV news, but in Akita-ben, a dialect so distinct from Standard Japanese as to push very close to the ragged edge of 'new language'. To a Japanese speaker the dialect apparently makes you sound like a muddled hayseed. To this Japanese learner it's like being hit on the head so hard that you can't see straight and then being asked to speak Korean.

Our hosts ushered us into the front room, and launched into an animated lecture on the matagi lifestyle and history. I'll abbreviate what I caught:

Very few matagi hunt at all anymore. Like most traditional professions, the younger generation doesn't see any future in the business, and by and large, have decided to make their living in other, less potentially dangerous lines of work.  Our hosts kept at it, although they no longer used the traditional methods to find and kill the bears. The bears too, have changed-- we were told that contact with humans had made the Asian black bears in the region meaner and more carnivorous than the old days. Their fur had changed color, Sato-san claimed. Now their hides were bluer than before and their bodies larger.

We were shown a variety of tools, plants, and implements of the old ways:


The matagi hunted bear for their meat (<Most delicious are the bears of October and November>), their pelts, and for their gallbladders, said to cure any number of diseases. In more innocent days, bear meat was eaten raw as sashimi-- a faintly terrifying fact!

The lecture completed, we headed out to a nearby shrine to briefly pray before setting out: 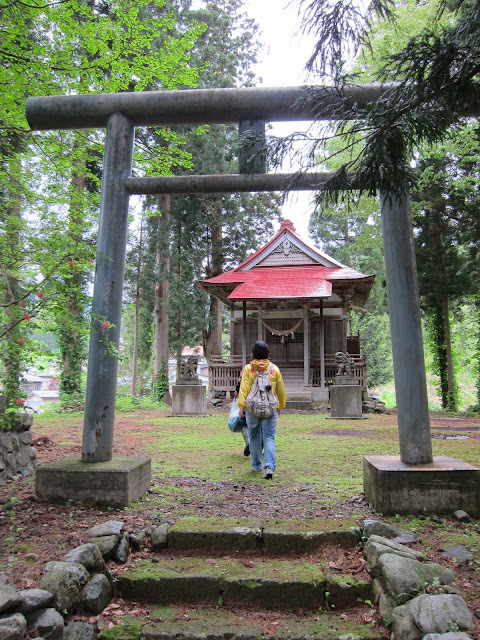 Matters cleared with the kami, we headed up into the hills outside of town to make kiritanpo and kiritanpo-nabe, local specialties said to originate with matagi. 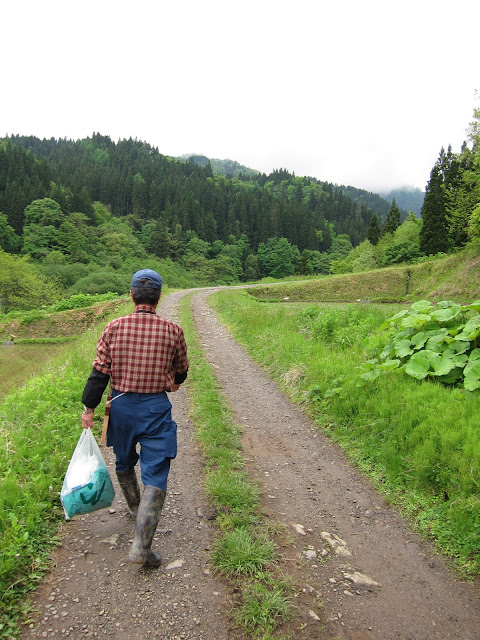 I chatted (to the extent possible) at lunch with one of the Satos-- he'd been an elementary school teacher in the area, and had once visited America as part of a government-run enrichment program. He'd spent two weeks in the Boston area. What stuck with him, he said, was how large the country was. <You looked down in the airplane, and it just went on and on!>
After lunch, our hosts crashed off into the bushes to demonstrate how matagi would hunt in groups. In the days of matchlocks, spears, and bows, hunters worked in groups. Half would hide at the high ends of ravines and wait for bears to be driven towards them by the rest of the group. The rough terrain would lead the bears to the shooters. The lead man in this operation had to be the best shot and also the best at camouflage-- we were told that while waiting for the bears to come, one had be still <like a tree>, no easy task in winter. To demonstrate, Sato walked off a ways and pretended to drive a bear towards us, whooping and growling as he came.

We parted ways after the demo, stopping in the next town to see a small and somewhat cheesy museum of matagi artifacts, attached as a kind of bonus attraction to a hot-spring resort. It was not a model of good museum design-- the tags were mostly each object's name in dialect, with cryptic definitions in Standard Japanese that evaded my abilities to translate. 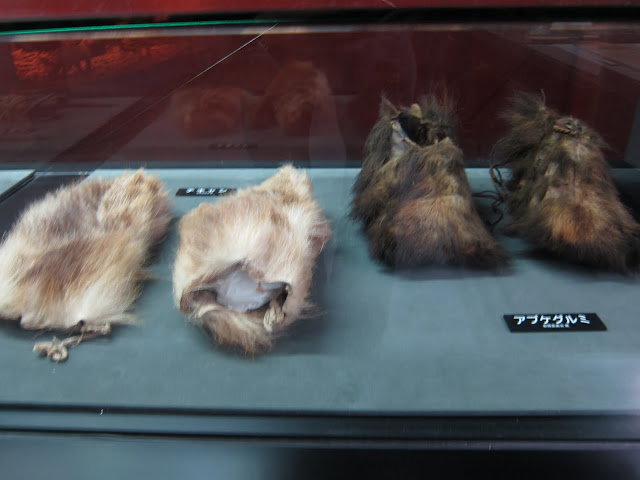 All in all, a good long day in a good long weekend. All that remains is to do my homework!