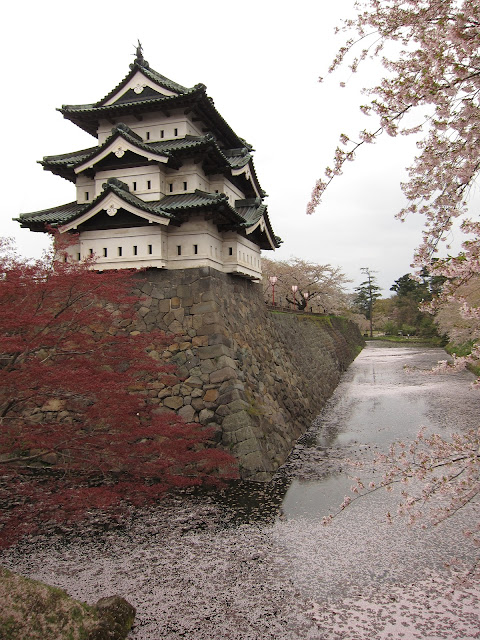 The cherry blossoms have come this weekend to North Japan, just as the TV predicted, bringing with them a pile of eager "petal-peepers" from all Japan, who come to famed sakura beauty spots to wander among the flowering trees, and (again, according to my Japanese textbooks), contemplate how perfectly the falling petals reflect mono no aware, the glorious sadness of impermanent existence.

Members of the audience who send emails instead of elliptically written waka poems inscribed on fans will be happy to know that in practice hanami consists mostly of "drinking socially and hanging out", and thanks to the AIU Aikido club, whose former president, Shugo, is a native of the noted sakura area Hirosaki, I had a perfect place, time, and crew to do my flower-viewing with.

Hirosaki, well north of Akita in Aomori Prefecture, is noted for its apples, product of the brisk northern climate, and for its modest but handsome castle, whose grounds are planted with thousands of cherries. It's a long morning's ride out there from Akita, the train a two-car local affair with bench seats and a nattily-dressed engineer with a pocket stopwatch for his station-stops. 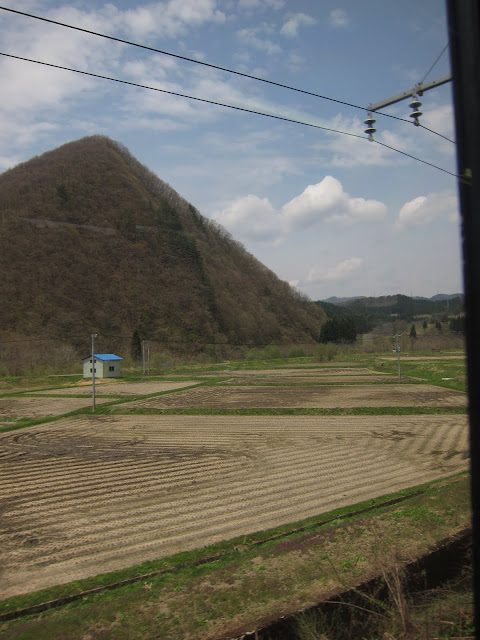 The train passed through what seemed like endless miles of Akita's famous rice paddies, the line elevated on an embanked right-of-way that let us look over the fields, worked by weathered looking, aging farmers, to the steep wooded hills and mountains beyond. We stopped to change trains in Ōdate, the birthplace of Hachikō, Japan's most famous dog, enshrined on the station platform in a Shinto altar to match his more famous memorial in Shibuya. 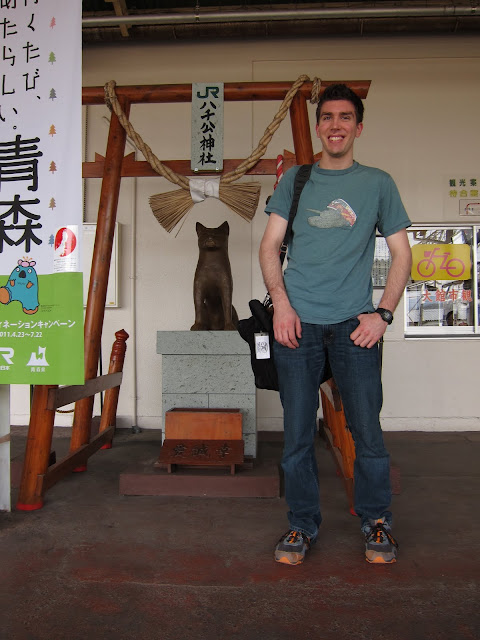 Our hotel in Hirosaki couldn't have been better-located, it turned out-- we were steps away from the station, the castle grounds, and, as it later turned out, a late opening izakaya or two. 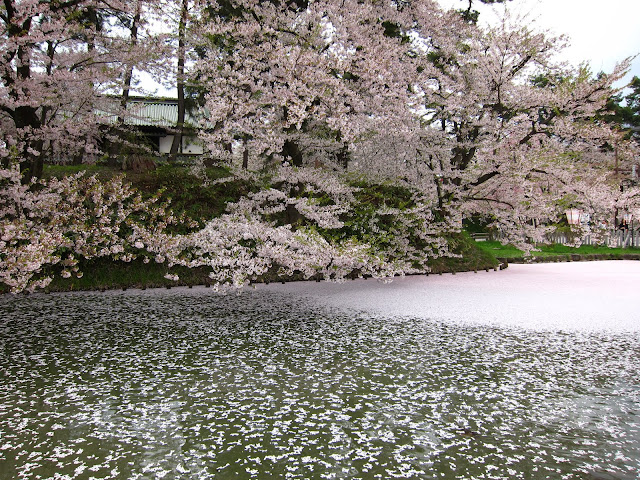 The sakura were better than I expected-- every tree in the park was in bloom, the flowers at their evanescent peak (ああ、この浮き世!), dropping a blizzard of petals that filled the air with color and blanketed the surface of the former castle's moat with floating specks to the consternation of the resident well-fed koi. A shamisen player, busking on the bank, saw us coming and switched from folk songs in the Tsugaru style to a quite serviceable rendition of the Super Mario Brothers theme. 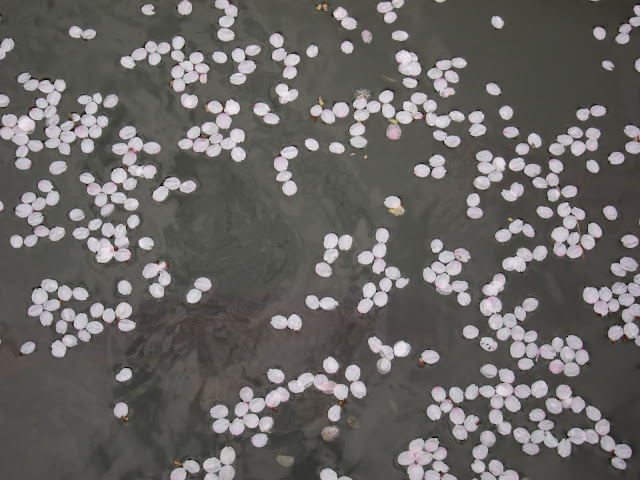 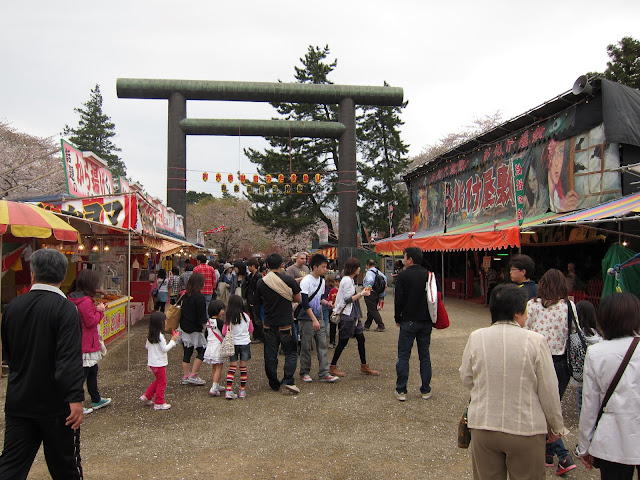 A local Buddhist temple sold sealed horoscopes by date-of-birth-- unfortunately, it seemed that they'd sold out of mine. A bad omen?


We wandered the castle grounds together all afternoon, sampling each others' fried noodles, okonomiyaki, and snow-cones, rowing on the moat in rental boats (controlled chaos, but I turn out to be a quick study) and taking pictures till our camera batteries gave out, the northern rainclouds rolled in, and, footsore and belly-full, we decided to take a public bath before we hit the pubs. 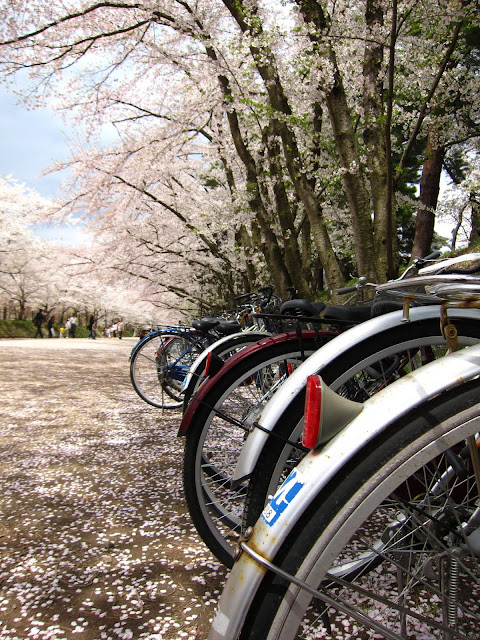 -- Postscript: The title of this blog post would be written "弘前にて”in Japanese, meaning literally "At Hirosaki" in an elevated style. There is a similarly titled novella, "Kinosakinité", ("At Kinosaki") by author Shiga Naoya, set in a tourist town (in the south) with a similar name. I have removed from this account the times when this fact caused me to flub the name of my actual location in conversation to the consternation and amusement of my buds.  I hope I haven't been abusing my blogger's prerogative to include self-serving jokey references  in my posts-- sorry to all of you who are getting tired of clicking all that underlined blue text!