After a long summer, the fall looks like it's going to be gone even sooner than I'd imagined-- it's not been two weeks since I was sleeping with the A/C on maximum, and already I'm feeling glad for hot tea on the chilly mornings. In the fields, all but the latest rice is ripe and ready, and lately on my commute to work, I've been dodging combine harvesters and overloaded kei trucks bringing the grain to market. I was woken early last Saturday by the rumble of equipment behind Green House A-- an old farm couple already had the paddies adjoining the apartment well in hand by the time I'd had my breakfast. 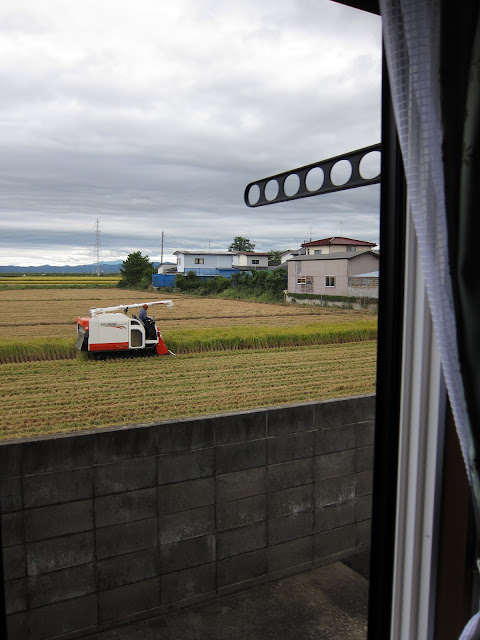 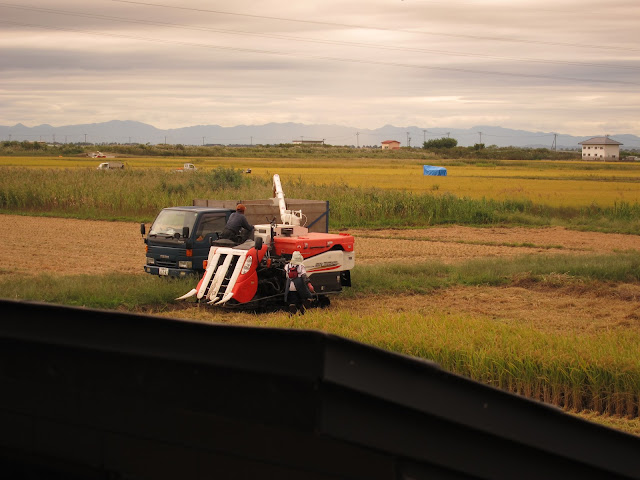 Come Sunday a week later, and I was up with the birds too, with different produce on my mind. Among the events buried in last week's bout of Delayed Updateitis was another of my weekend daytrips to the nearby village (1) of Gojōme.

As its name, 五城目/"Fifth Castle" suggests, Gojōme was formerly a provincial castle-town-- a concrete reimagining of the original keep (honmaru/本丸), still looks over the town from the nearby mountain Moriyama, safely guarding a treasured collection of dusty stuffed wildlife and exhibits on local economic history.


Gojōme's history as a castle town turns out to have left one further mark on its modern history-- on days of the month ending in 0,2,5, and 7, it hosts a morning local produce market on Shitamachi-dori, the avenue that runs along the approach to its temple. Run, in the main, by charming, garrulous old ladies(2) with their farms' finest spread over back issues of the Yomiuri Shinbun, it wasn't yet in full swing when I came by in September and filled a morning browsing for cucumbers, nashi, and okra.

<You live in Funakoshi? Come back in the middle of October>, one of the vendors had said, filling my bag with far more eggplants than my ￥１００ had actually paid for. <That's when the mushrooms come in.> <The mushrooms?> I asked, struggling to parse her Akita-ben.

<Oh, yes, the mushrooms! Some years matsutake. What are you planning to do with all the eggplants?>

<With this many... stir-fry the first three and salt-pickle the rest with wasabi?>

<Amazing! You know Japanese pickles! Here, have a few more!>

With my crisper filled with pickled eggplant and visions of mushrooms dancing in my head, I began to plan my return.


I made it in to town by midmorning, just as the market was reaching its peak. Joining me in my browsing were out-of-towners from as far away as Tokyo, a few of whom got much amusement out of my "local" status when I struck up a conversation with them. 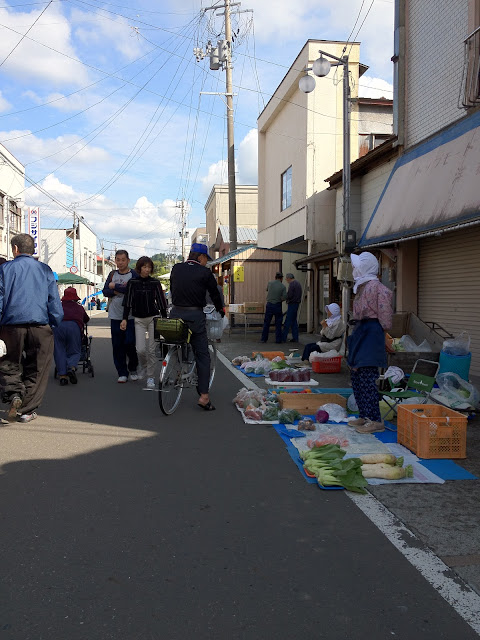 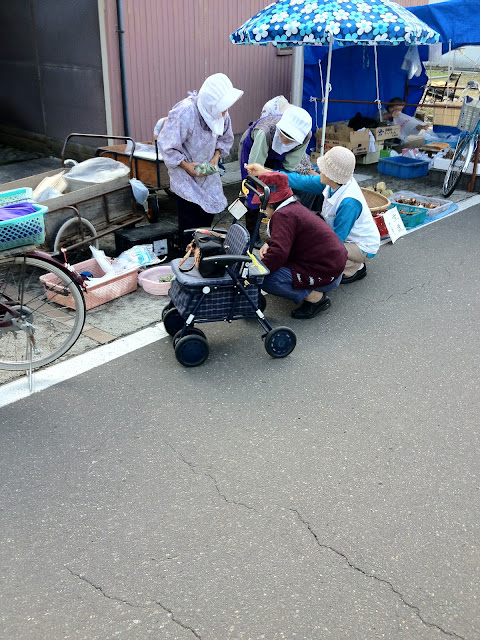 It didn't take me long to hit paydirt-- no matsutake were to be had (I hear it's a bad year for them), but dozens of local specialties were on sale-- all of them unlabeled, with un-Googleable dialect names. I asked which ones made good udon and returned with two varieties: hatsutake, a crumbly orange variety with a hollow stem that bruised blue (a characteristic I'd only ever heard about occurring, rather thrillingly, in certain other mushrooms...), and half a kilo of small, brown, slimy fungi which I was instructed, helpfully, to parboil before cleaning or preparing-- and whose name I immediately forgot!

If the mushroom sellers were doing well, the local bakery was also doing a roaring trade-- I walked in the door just as the last loaf of the day's bread was walking out. <Would brioche be OK instead?>, asked the counter attendant. Why yes, yes it would...! 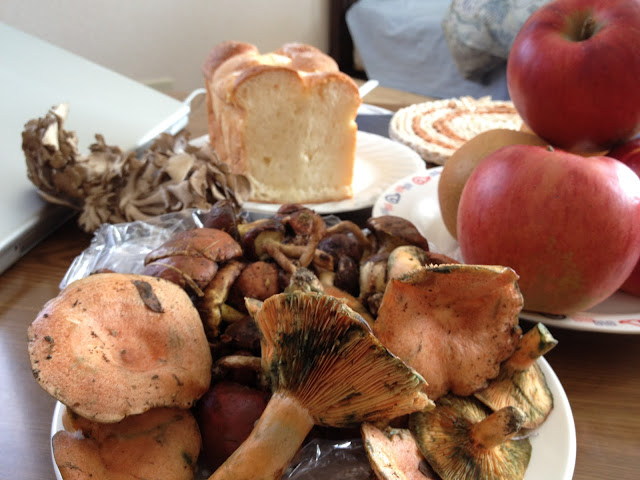 There was just enough room in my shopping bag for a mixed quantity of apples and nashi, the most expensive purchase of the morning. 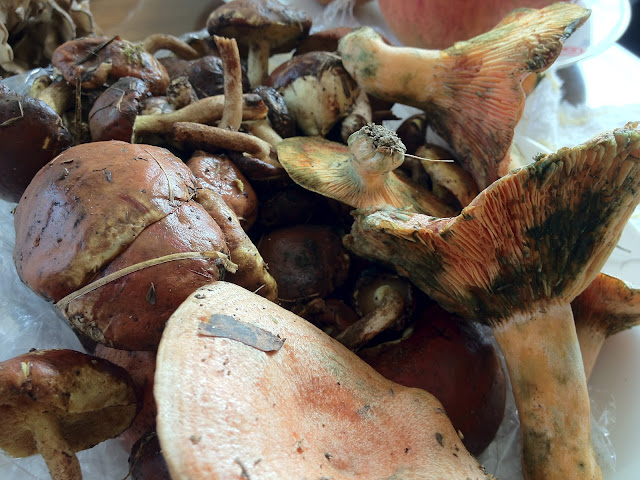 I drove home and got to the prepping. 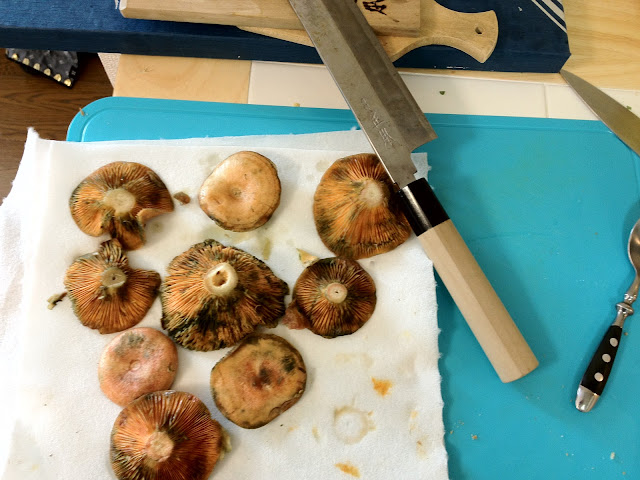 I cleaned and stemmed the hatsutake (turns out they bleed an orange, milky fluid) 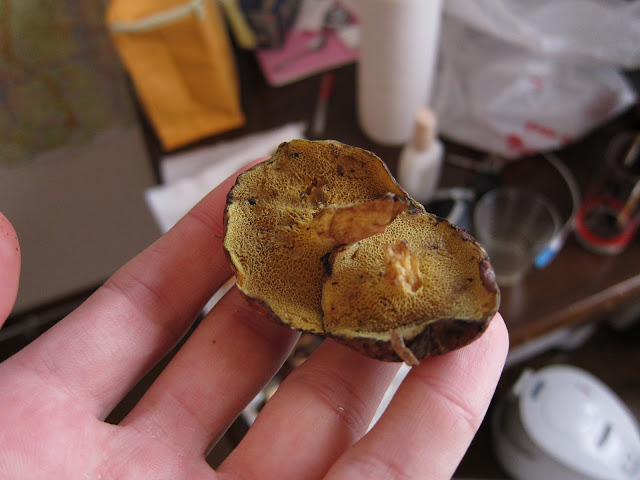 and did my best to Google the smaller mushrooms. Were they the variety called kawamuki? A variant of enoki? The search took me down some pretty weird mushroom enthusiast sites... but didn't turn up a lot of solid answers.

Boiling did, indeed, remove much of the scum, dirt, and leaves from the small mushrooms. Three of the words I'd managed to catch from the guy who sold me them at the market had been "stirfry" "with" and "hot pepper", so that's what I did. They weren't half bad-- like shiitake with a milder flavor and a smooth, silky sort of mouthfeel.


Meanwhile, I soaked dashi-kombu and the discarded stems of the hatsutake to make stock...

then strained the broth, added in the mushroom caps, some sake, mirin, shōyu, and salt (plus some shiitake, maitake, and nameko I had lying around) (3) simmered the mess for around 10 minutes , tossed in some spinach, leeks, and another Akita specialty, thin inaniwa-udon... 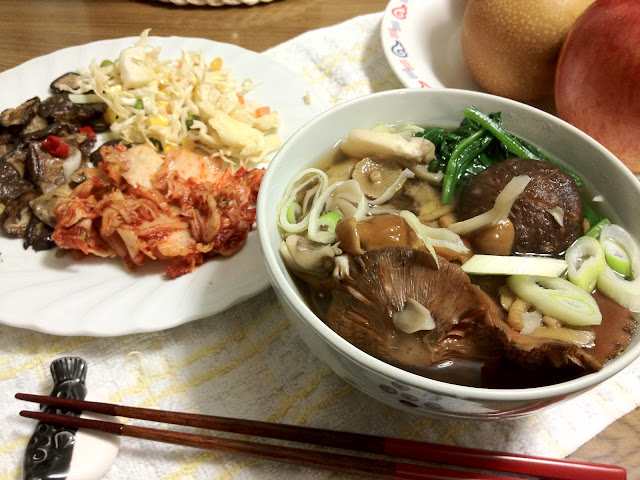 ... and served it all up with salad and kimchi. A good end to a good day. When I come back next time, I think I'll ask which mushrooms go well with rice...

(1) Perceptually a lot further away-- it's only 24 km/16-odd miles away but it takes 45 minutes to drive there down the rough-surfaced, narrow country roads. Distance gets odd when the speed limit on most everything is 37 mph. Everyone speeds egregiously, of course, tearing along (*gasp!*) at nearly 50.

(2) Stooped, bonneted obaasans ("grannies") and their leathery, taciturn husbands make up the bulk of farmers in Akita (and indeed in all Japan). When in 30 years they pass on, probably all still in harness, someone's going to make a pile buying up all the farmland and building horrible malls or something...

(3) As I gleaned quickly from reading Japanese recipes for mushroom udon, there's a lot of leeway to work in here, so I opted to more or less wing it. For two liters of soup I added in all probably nearly 1 1/2 kilo of mushrooms and 7 T each of shōyu, sake, and mirin, plus 1 tsp of salt. If any of you plan to play along at home, I bet you'd get good results from shiitake, maitake, and oyster mushrooms.