As the leaves turn, the mornings become chillier, and the air masses over the Japan Sea announce the change of seasons with never-ending bands of chilly, soaking squalls from seaward (1), I've finally begun to find things close to routine in the classroom. I'm feeling more assured, and, as my Japanese colleagues become more used to me, more confidently relied upon, before the blackboard and in the staffroom. (2) With a routine now solidly in the making, opportunities to break free of the day-to-day are becoming steadily all the more precious-- whether it's to lead a group of AIU students (3) round the local elementaries(4), there to be mass-hugged, sung songs, and asked endearingly left-field questions (WHAT IS YOUR FAVORITE SALAD DRESSING(5)?), or to hop into my car and drive off in search of adventure somewhere in the hills and hollers.


A lucky find in one of the numerous travel brochures I've been collecting to this end led me to the Old Ikeda Garden in Daisen, the remains of an old Meiji-era landlord family's estate. As the fall colors came in, special Sunday tours were on offer, so I decided to make the drive. 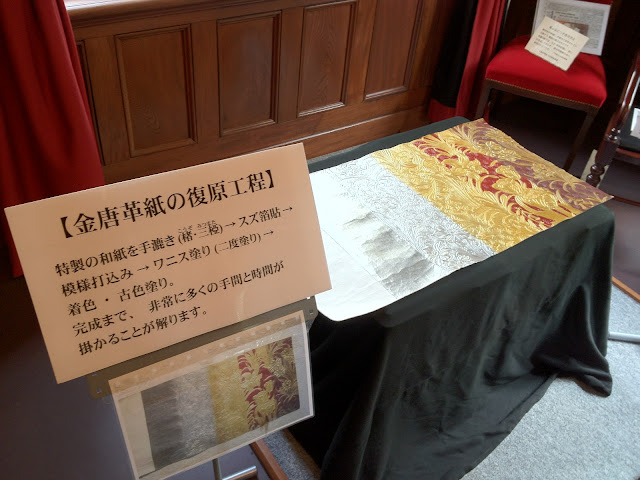 When I'm not on the move, the sphere of expat society has been coughing up some interest from time to time-- this past weekend marked the Akita ALT Halloween Party, a multi-national hub of a club night, at which I, dressed in the samue, towel-hat and apron of a sushi chef (6), attracted much amusement from the Japanese guests with my attempts at an accompanying vinegary accent, politely but firmly attempted to ward off a beery Portuguese transplant intent on giving me unsolicited advice, in a bibulous trilingual pidgin, on how to "score" with locals, and put my EMT training to good use helping move an immense and very unconscious fellow into the recovery position, before, of course, having an awkward go at some dancing...(7)
So life rolls on as the fall rolls in. More when I get a few more minutes to spare!


(1) Looks like it's the time of year again when Akita reminds you it's at the same latitude as the wet part of Oregon, though it seems a bit churlish to be whining about this sort of thing as the latest contender for Storm Of The Century cuts a swath through the Eastern Seaboard. I'm watching New York flood on NHK as we speak.

(2) Openly expressed assessment of my performance, however, will have to wait until all of us are somewhere around switching from beer to sake mid-way through the end-of-Christmas Break enkai.  Kenny revealed to me that after what seemed like perfectly smooth sailing last year, once several of his favorite JTEs were deep in their cups, they horrified him by unleashing a torrent of point-by-point criticism of his performance-- all of which would have been most usefully delivered months earlier.

(3) Visiting, of course, on the same program that let me visit Noishi and several other Oga area schools only a year ago. Funny to have the ALT's view this time around... are college students usually so downright dorky with a roomful of 8-year olds?

(4) I have taken and been given pictures of some of these goings-on, but as the BoE is in the midst of an Internet-age crackdown on personal information leaks, I've decided to make them "limited release". I assure you, they are very cute.

(6) While we're talking sushi, here's some bonus viewing, tongue very firmly in cheek: . Call it my apology for the fact that, unfortunately, none of the pictures of me in costume seem to have come out.