Time passes onward, as I struggle to keep up some semblance of a blogging schedule between my classroom duties. Since the last update, I've finished the last of the mystery mushroom udon, taught a full week of classes, skirmished with the Katanishi girls' volleyball team, sipped tea with the Higashi Middle Tea Ceremony Club, and in the last three days, been dispatched a second time to the Government Training Center for another teaching techniques conference-- and made time to drive a few hours eastward to Ōdate along with Kenny for the yearly Kiritanpo Festival.

Longtime readers are no doubt familiar with kiritanpo, the Akita specialty I last sampled while learning the ways of bear-hunting at AIU. Mashed rice roasted on sticks may have originated with matagi all across the prefecture (or indeed, anywhere of the other dozens of places in Japan that have similar dishes and desserts), but Ōdate claims it as its own. Kenny told me to expect a low-key gathering of food stands, with an unusually good car boot sale nearby (his winter jacket, in fact, was a West German surplus parka he'd scored a steal of a deal on last year).

I dug up a link to the festival's website, which practically oozed goofy local flavor from its every pore. Unfortunately, as we discovered when we arrived on Sunday afternoon, it seemed Ōdate had had grander plans for the new year. The festival had been moved indoors to the municipal baseball diamond, a massive dome-tent structure (1)

that loomed over the undersized houses surrounding it in an oddly familiar way.

Given the new location, I was surprised to discover far fewer people than I'd expected inside the dim interior of the arena. Bad news for Ōdate, I supposed-- but, as I learned when I approached a food vendor and tried to get myself a bowl of kiritanpo-nabe, it seemed they'd instead been outdone by their own success. Most all of the stands inside the dome were only accepting advance-sale meal tickets, which apparently had already sold out and cashed in before lunchtime-- leaving us in the early afternoon to hunt for a stand that was willing to accept money for food. It took longer than expected. While we waited in line with the small crowd of other folks who hadn't got the memo about the meal tickets, I took a look at the festival's new website, which I'd somehow missed in my enthusiasm the day before. They'd glossed up the look of the place, certainly-- the disturbingly phallic mascot characters who'd cluttered up the old site were gone. But the boot sale was nowhere to be found, and when I eventually found a stand that could be persuaded to take yen for kiritanpo-nabe, it just didn't taste the same as it had when it was made, to no recipe, by an unintelligible elderly mountain man. At least they hadn't totally banished the Freudian Tanpo People after all. We amused ourselves for a while watching them half-heartedly pose for pictures with visitors. 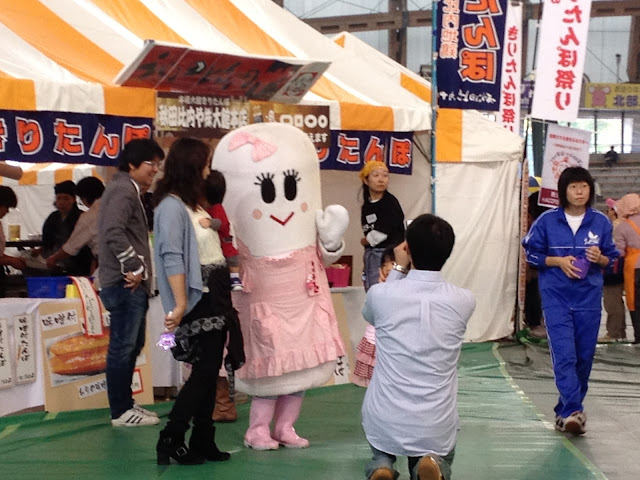 By the time the early twilight had fallen, (2) we were on the road home again.


(1) Supported by glue-lam beams made of local cedar plywood, a nice touch.

(2) No daylight savings time here. By 4 it's twilight. By 5 it might as well be midnight.