Let's start this entry with a reassurance: I'm still alive!

Although the remnants of a massive typhoon made its way past Green House A on Monday in a flurry of lightning and thunder, nothing was amiss when I woke in the morning-- save that the news was full of images of cars being flipped in Okinawan parking lots.

I have, however, been visited by the dread Blogger's Disease-- the last weeks have seen me too busy to write down and record the majority of the experiences I'm meeting daily, in and out of the classroom. The JET Program is fond of promoting the sense of accomplishment that its selected ALTs can derive from their jobs. It's certainly true. Excepting that I'm coming home with so much accomplishment lately that it's all I can do to heat up some leftovers, make a lunch for the following day, and crawl into bed.

In truth, I have been under what qualifies as fairly unusual load-- my debut as a solo teacher has finally given me the opportunity to give the self-introduction speech I've been planning since before my arrival to the dozens of classes in which I assist (1) -- which means I've been teaching nearly every period on every day of these early deployments-- far more than the "actual" English teachers I work alongside. Even talking about topics as near to heart as your hobbies, house, and home country gets awful tiring when you do it for seven hours straight. On the whole, the teaching seems to be going well--albeit in the few lessons other than self-intros I've so far assisted with, I do feel a bit as if I've been largely planned out of the lessons. Kenny assures me that as my lead teachers become gradually more comfortable with me, I'll be able to involve myself further with lesson planning and impromptu classroom direction changes. I hope he's right-- in particular I'm working on ideas to spice up the rather dreary reading passages that seem to make up the majority of the tested material we're obligated to cover. Even so, as long as the kids keep smiling (and leaving elaborate smilies on their worksheets), I'll still be having fun at my job. And there are always the weekends to look forward to, as I still haven't exhausted the supply of local tourist attractions.

The past Saturday and Sunday took me far afield indeed-- to an ALT-organized cabin camping trip on the shores of Lake Tazawa, an azure-blue crater lake near Senboku, a good three hours' drive from Oga. The deepest lake in Japan, my tourist brochures inform me, it never freezes even in the coldest Akita winter-- a property either attributable to its size and geothermal activity or the body heat of a human woman and her dragon-lover eternally gettin' busy at its bottom. (2) 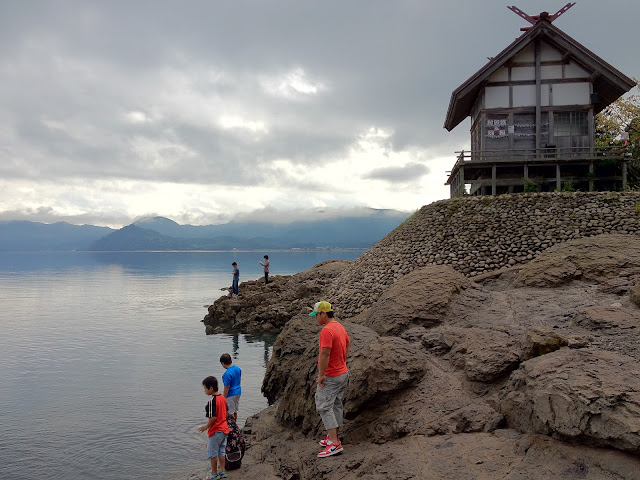 Better still than the lake were the bathing hot springs nearby-- a cluster of famed resorts collectively called Nyūtō Onsen(3). We hit up Kuroyu (黒湯, "Black Water”), one of the reputed best.


It largely lived up to the hype, from its setting-- a complex of age-darkened, thatch-roofed buildings-- to the all-important water, which was volcanically hot, powerfully sulfrous, and so laden with dissolved minerals that I found chunks of various unusual-smelling salts in my hair the next morning. The baths were splendid--  including two open-air pools that allowed for a splendid contrast with the fall air-- the larger being, as many of the older onsen in the area are, mixed-gender. It definitely takes a gulp of courage to walk out into the open wearing nothing in front of four naked women the age of your mother the first time you do it. (4) It pleases me to report that Kenny and I were the only members of our group to take the plunge-- and better, I even managed nonchalant conversation with my bathmates. Consider my Japan-Hand Self-Esteem at least partially recharged.

(1) "Plans never survive first contact with the enemy", as the poorly-attributed quotation  (which fin d'siecle Prussian said that, anyway-- Moltke the Elder? von Schlieffen? Ludendorff?) has it.  Hence in spite of my advance efforts to ensure that, figuratively speaking, the troop trains into Belgium run on time, I've now delivered the same speech to live audiences at least a dozen times, and have never once done it the same way twice. In particular, adjusting the predictable moments of laughter and "oooh-ah" to suit the audience's mood, attention span, and level of listening comprehension is an interesting balancing act.

(2) Readers, you know which explanation I prefer!

(3)Famed enough to rate mention in Western travel guides, which otherwise gloss over Akita entirely. The name is written  乳頭温泉, "Breast Springs", for the milky color of the water, I presume.

(4) We had to get quite cozy to boot, as even the largest mixed bath in Kuroyu is the size of a largeish hot tub. More fun: it's separated from the changing area by a long exposed boardwalk, so everyone gets plenty of time to see you coming before you make it into the water. It gives you a good long time to wonder if you read the Japanese sign that says "Mixed" right or if you've just made a horrible mistake. That all of my female bathmates had maintained their elaborate hairdos intact and unmussed by the steam made me feel weirdly more unclothed than they.
Posted by -D at 10:31 AM