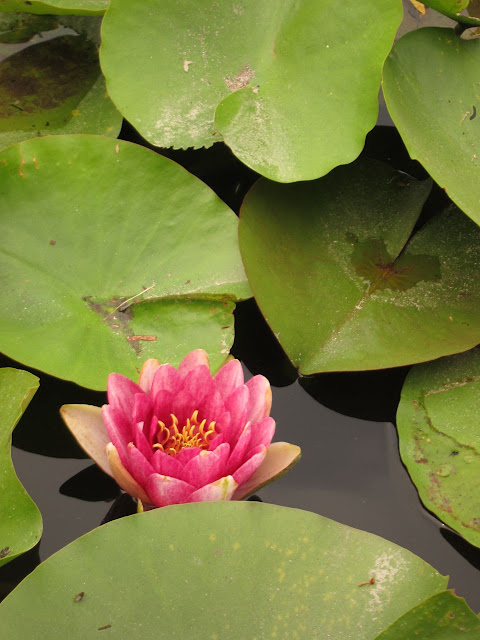 There may have been scheduled classes, but it seemed like a waste to let the last bits of free time before my return go to waste without getting a little better acquainted with the city of Akita itself-- so this Saturday, I printed out a map of the downtown from Google and hopped on the 8:30 local headed into town with very little in the way of a plan beyond a stated intent to wander into as many cool things as possible.

I turned left out of the station on a whim, and found myself, after a few blocks, in front of what proclaimed itself to be a "People's Market"-- the Communistic name nothing more than an unfortunate consequence of translation, as far as I could tell. 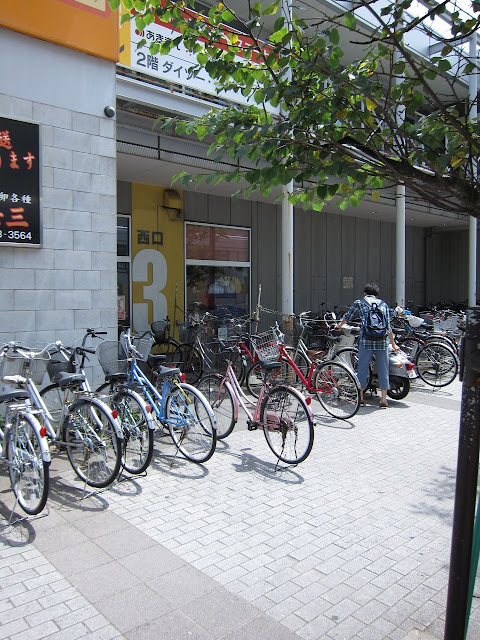 Inside was, as I'd hoped, a covered food market of the type that is perfect for snacking, weird-food investigating, and general flaneurie. 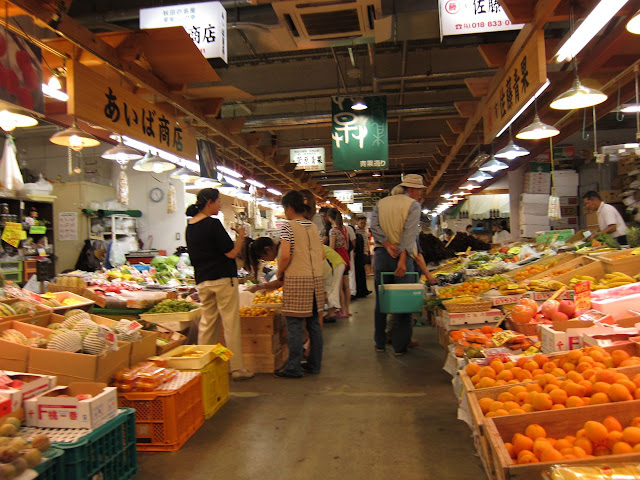 I picked up a package of cherries in the fruit section, before moving on to Meats and Fish.

Breakfast wore off a little early, so I called a halt at a little lunch-counter udon place that seemed to be doing most of its business with other shopkeepers.

Udon-enhanced, I set off back in the direction of the park, stopping along the way to investigate the Atorion, a 7-story souvenir shop/concert hall a block or two from the station, and one of the few things my guidebook even bothered to mention about Akita. A breezy look at coming attractions suggested that the editors may have erred.

The souvenirs turned out to be as lackluster as the coming events, so I headed off in the direction of Senshu Park, built on a hill that once served as part of the defensive earthworks for the city's former castle, once the residence of the Satake clan daimyos. 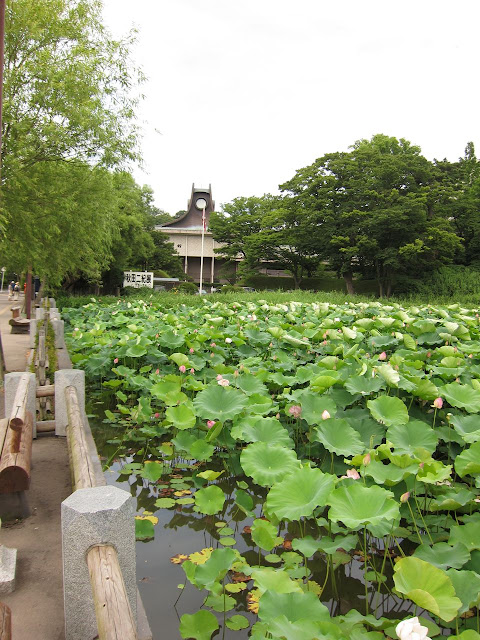 The present owners had been nice enough to fill what I surmised to be one of the moats with fantastic-looking lotus and water-lilies, now in full bloom.
Across the bridge into the park, my guide informed me, was to be found the municipal art museum, its collection principally donated by one Hirano Masakichi-- an unfortunate turn of events, as I quickly found out. Like so many money-rich, taste-poor collectors of his era, Hirano, as far as I could tell, had apparently had assistance in assembling his collection from an expert. His choice, however, left something to be desired-- rather than a Duveen, it looked like the hapless tycoon ended up falling in with one Tsuguharu Fujita, a Frenchified (down to an affected Gallic "ou" in the 'official' spelling of his surname) former expatriate artist about whom Wikipedia can say nothing nicer than that his fame rested chiefly on "stylistically unique" renderings of  women and cats. I have to hand it to 'Foujita'-- despite the fact that his style wandered over his career from twee, unschooled, mock-Chinese ink-paintings to a hideous, fruity Socialist Realism by way of an blood-weepingly ugly attempt at Post-Impressionism, and that, from the dozens of self-portraits scattered throughout the gallery, he looked something like Tojo Hideki with worse hair, he'd apparently been quite the salesman-- even managing to pawn off on Hirano a monumentally huge yet weirdly slapdash-looking oil-painting depicting seasonal festivals in Akita. The perfect gift for your worst enemy's zeppelin hangar.
Fortunately, Hirano had also apparently found the time to purchase a couple of minor Picassos, a minor Van Gogh self-portrait sketch, and a complete series of late Goya etchings on a bullfighting theme. From what I could tell, bullfighting around 1816 involved a startling degree of audience participation, and the odds weren't always in favor of the guys with the capes. The best of the images were both statuesque and dynamic, their motion frozen in a way that, instead of the mechanical arrested motion of a camera,  strikingly evoked the way that single shocking moments linger in the human memory-- surrounding detail faded out to a blur, the central figures caught exactly at the crucial moment with a chilling intensity. 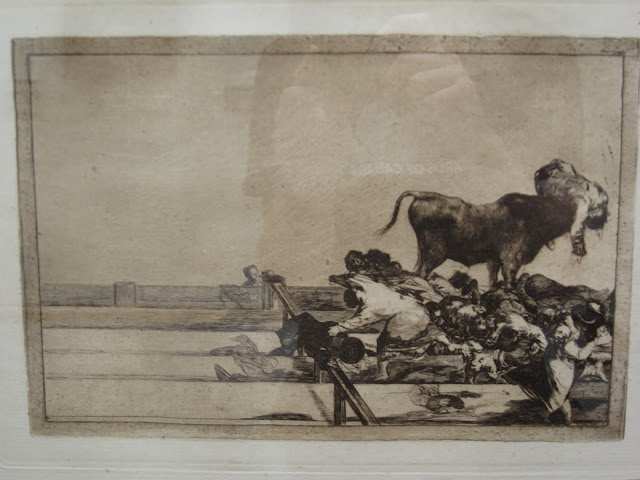 With a few hours left before my train home, I left the Hirano Museum to noodle around the park itself. Hiking up a forested hill, I soon found myself at the park's center, the partially restored grounds of the former castle. 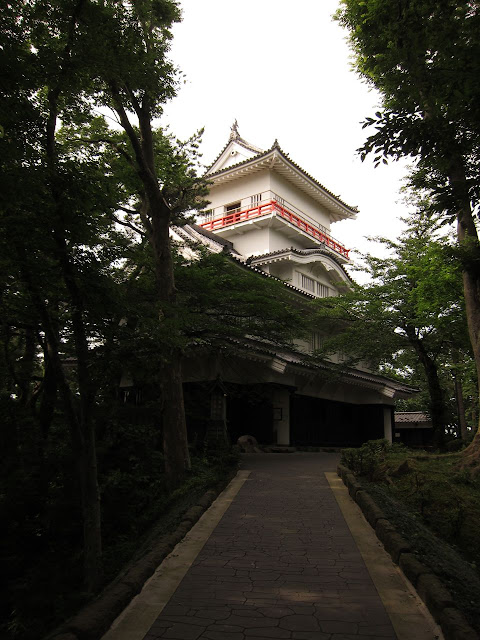 Forbidden, as former enemies of the Tokugawa Shoguns, from maintaining a grand central keep, the ruling Satake family had built instead a large earthworked compound with several smaller defensive structures, a few of which had been rebuilt in the 1980s.
A small history museum occupied a former defense turret, and I popped in to take a look. Not a lot of the densely-written Japanese-language material in my brochure got through to me, but I was pleased to find that the exhibit featured one of those old-school push-button dioramas depicting the castle town as it would have looked during the height of the Edo Period. 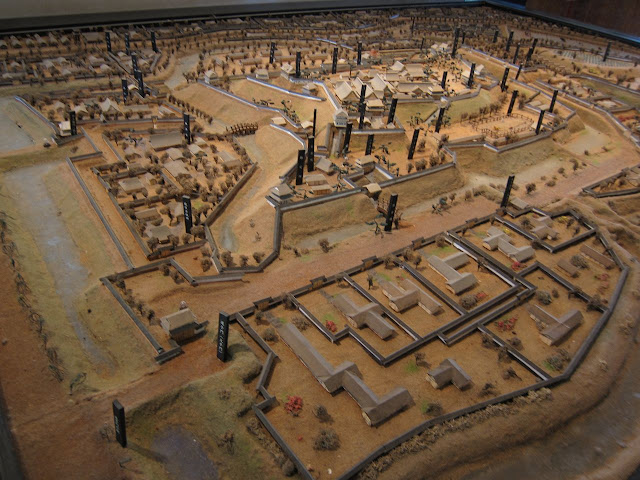 On the fourth floor of the turret, the museum planners had included a balcony, the better to compare the old view with the new.

Quite the change, I thought, leaning on the railing, and looking out towards the mountains. Amazing how quickly the time goes.
Posted by -D at 1:28 AM