Ben "Early to Rise" Franklin would probably despair of Kazuma, my roommate, who usually doesn't manage to rouse himself before around 1 on off days, and, when, as is my wont, I woke a minute before my alarm clock's scheduled wake-up at 6:30, it didn't look like he was planning on making an exception for my move-out, conveniently quashing any fears I might have had about a mushy, drawn-out arting. So, quietly closing the bed-room door (leaving a note that I hoped would say more), I rolled up my futon, turned in the key at the dorm head office, and caught the 8:30 bus to Wada Station, watching behind me as I clipped off the last of my bus tickets. It wasn't until AIU disappeared, presumably forever, around the bend, before the finality of the thing really began to sink in.
A bus and a train later, I found myself in Akita Station, overrun, this being the first official day of summer vacation, with uniformed groups of students, sitting in loose herds on top of their school-issue knapsacks, or wandering in twos and threes towards the station's attached shops. With an hour to kill, and seats already reserved, I figured I'd follow along. Like most large train stations the world over, Akita features an attached mall, positively lousy with souvenir stands, food outlets, and small restaurants-- all, if you're used to facing hard decisions when looking for something that looks safe to eat at the average American train station, of head-spinningly high quality. Looking for a packed lunch, I bought a bentō of assorted flavor fried-tofu/rice inari-zushi, and, lured by a charmingly proffered free coffee sample, popped into the station's import food store to have a look around. If ever there was an object lesson in the strange bedfellows of globalization, this was it: English tea rubbed elbows with export-marked bags of Taiwanese Doritos and Indonesian-origin Funyuns.
Equipped with my bentō and a normally-shaped bottle of sparkling lemonade, and checking my ticket, I made my way to platform 11 to wait for my train's arrival, planning to dig into a historical-fiction manga I'd picked up in May but never had time to read.
I looked up to find that I'd become the background for a group photo being taken by an energetic group of around 30 be-sneakered high-school girls wearing shirts that identified them as a Miyazaki Prefecture high-school varsity basketball team, closely chaperoned, it seemed, by their coach, who hurried over to apologize.
Teacher:"Um, so… sorry to bother"
Me--<Oh, it's all right, no trouble at all!>
T:<My goodness! You speak Japanese! Girls, look! Isn't he good?>
Me--<Oh, not at all-- I really just started studying>
T<Fantastic! So natural! Everyone, maybe you can ask him some questions. It'll be good practice.>
Girls: <Where are you from?>
T: <In English~!>
Me: "Oh yeah, English is fine too-- uh, I mean, <English is fine too>"
G: <Oh, um, right. Err…>
G: "From…. how long…. Japan?
Me: <Err, do you mean 'Since when have I been in Japan?'>
G: <Yeah!>
Me: <About 3 months.>
T: <Three months! And he can already speak so well!>
Me: <Well, there was around 3 1/2 years of Japanese studying before that, but yes, this is my first time in Japan.>
T: <Wow! So soon!>
It took a good several minutes for the teacher to wear out her enthusiasm for complimenting me, but that done, I managed to have a very pleasant chat with the group, who indeed turned out to be from Miyazaki-ken, and were just on their way back from a several-game series with Akita schools. It seemed like no time at all before our train had pulled into the station. I found my window seat, wrestled my bag into the overhead baggage rack, and settled in for the trip south.
Exactly as my watch ticked over to our 10:56 scheduled departure, the Komachi Akita Shinkansen, a streamlined super-express "bullet train", pulled out of the station with an almost subliminal smoothness, the nearly inaudible purr of the traction motors masked by a sparkly little ditty over the PA. As I looked out my window, two little boys, wearing their elementary-school issue hats and Pokemon rucksacks, ran after us, laughing wildly as they were outdistanced by the engine's building speed. At the end of the platform, a white-gloved signalman bowed to the waist. And before I knew it, we'd left Akita behind us altogether.
We winged eastwards towards Omagari, the narrow-gauge commuter rail-lines' power-poles, parallel to our track, blurred by speed into Art Deco streamline smears, the distant scenery sliding past with surprising haste as the engine began to really stretch its legs. South of Kakunodate, I popped open my bento and watched the distant, cedar-forested hills roll past as I worked through the black soybean inari into the wasabi/mountain vegetable rolls. 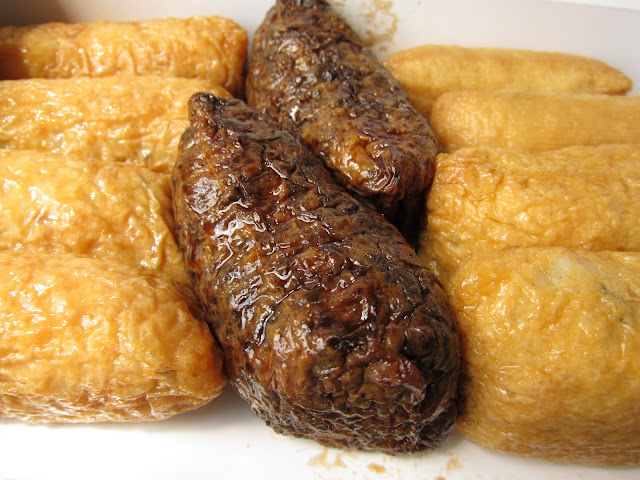 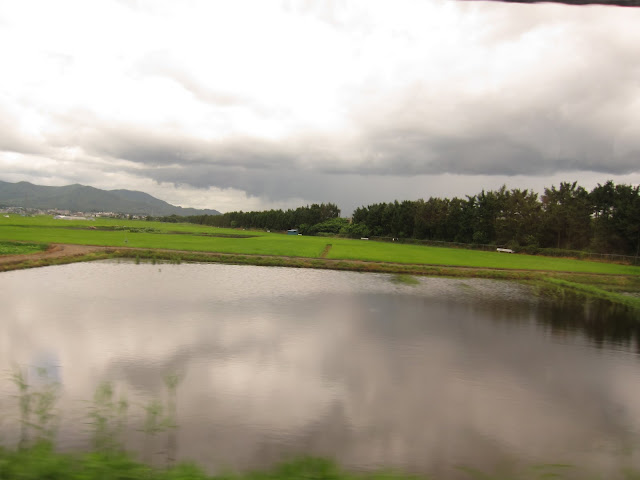 The mountains grew lower and further away as we passed Morioka and Sendai, where, next to the train station a few miles from the coast, I could see several tile-roofed houses covered with sandbags and tarps, the better to keep the rain off until earthquake-shaken tiles could be replaced. Like Kesennuma, the inland had been largely spared, it seemed-- though I was sure that, since the town was rumored to have been totally laid waste in the American media, matters were sure to be worse by the coast.
We cut through low, wooded hills one after another south of Sendai, as the train picked up speed again. I bought an apple sherbet (<Made from Aomori Apples!> off the onboard snack cart, balancing the cup on my laptop as we sped over a viaduct and a ticker at the front of the car spooled out the Mainichi Shinbun's weather report for Tokyo and points south. The landscape outside the windows seemed abruptly to have flattened out as we reached the verges of the Kanto Plain, and with it, the outskirts of Tokyo. 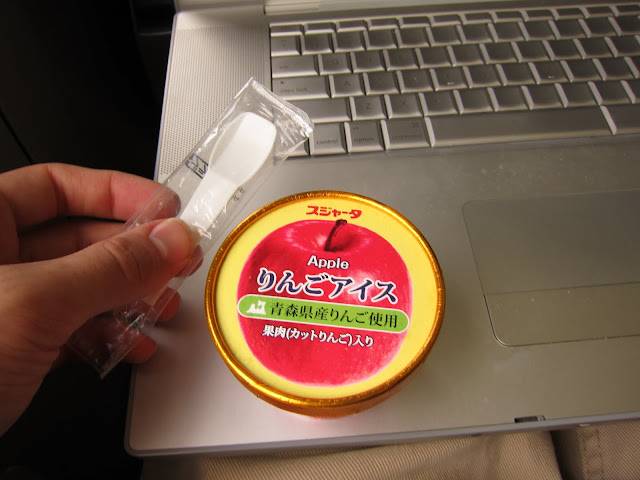 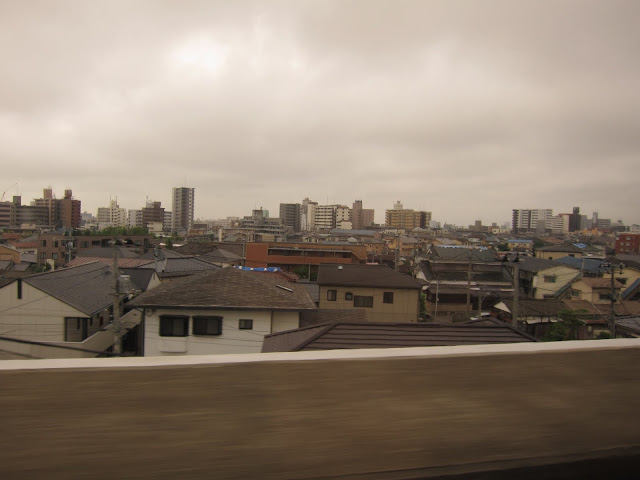 And almost before I knew it, I was grabbing my bags and leaping from the train in Ueno Station, feeling a long way from Akita-- a long way from home.
Posted by -D at 7:59 AM