The week that ensued was extraordinarily eventful in all but two critical categories: blogging and actual work. The lights, gas, and water were on in my new apartment, thanks to Stephanie (and with them, a 42” TV with yet-unlicensed HD access to NHK1) but, although I was able to watch the final days of the Olympics over my morning cornflakes, coffee and Creap 2, I didn't yet have access to the Internet at home-- or at the Oga Board of Education, where personal laptops were not permitted to access the local government network, and our temporary status as ALTs was not sufficient to rate us issued PCs. The Internet DTs come on hard when you'd like to be calling home-- fortunately, Kenny made known to us that he, like all our predecessors, had been stealing Wi-Fi from the next-door Municipal Geology Museum for ages with no apparent repercussions. True, the office where we'd been placed was, like many Japanese offices, an open-plan (unobscured desks in rows with supervisors along the back wall), but, truth be told, school was out and not much was expected of us-- indeed, some helpful soul had left a paper model kit, complete with scissors and glue, in my top desk drawer. Nonetheless, it was clear that, as I had expected, at the very least appearances were important. And of primary importance to keeping up appearances, as I learned, was making the rounds of my colleagues, coworkers, and superiors in order to properly introduce myself.

Between being taken on excursions to the municipal office's household registration department to verify my existence and acquire a national ID3, appropriately register my new official stamp4, set up a directly-payable bank account, write a brief comment (in Japanese5) for a school board press release, and buy groceries and housewares, I was taken, wearing my darkest suit, to ceremoniously visit and briefly chat with dozens of bosses both direct (the School Board section chief in whose department I served, his boss) and distant (the boss's boss's boss, and his boss, the Mayor of Oga, with whom I drank iced green tea and shook hands for the papers) over the next several days.

The festivities reached their ceremonious peak on Friday when, along with Kenny and Stephanie, I was ushered into the presence of the school board chairman and, flanked (as if by my godparents) by my supervisor, Mr. Yoneyama, Ms. Furuyama, and Kato-sensei, (the official in charge of maintaining our schedules), was read a formal description of my duties, and exhorted to valiant effort in the service of English education by the Chairman of the Board of Ed before being passed a sealed document that bore a description of my official charge as an ALT.

The weekend was equally hectic-- tagging along with Kenny and Stephanie, I witnessed a farewell beach party for one of Akita City's veteran ALTs, was shown around Oga and Akita City, and made it up to one of the mountain onsen for a quick, relaxing public bath.

And that was just the start of it-- Given Monday, Tuesday and Wednesday as paid “home study” time for Obon, we managed to fit in a quick drive round the peninsula coast road (it's scenic, all right, even amidst a pounding sea gale that drenched us all to the bone, prevented me from taking pictures, and brought out from among the slippery rocks a horde of gigantic, Mesozoic isopods)

and a trip out to the annual Oga Japan Sea Fireworks Festival, at which we enjoyed shaved ice, a fine selection of food on sticks, and more and better fireworks than I've ever seen anywhere else, including quadruple-color-changers, shaped-charge character-faces, giant Roman candles, immense cluster-bombs, sparkling teal-blue waterfalls, and huge green multiple-launch parachute flares, all accompanied by music and amusing color commentary.6 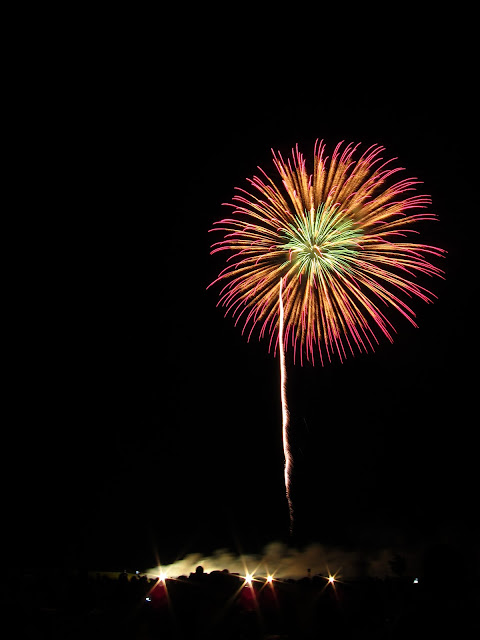 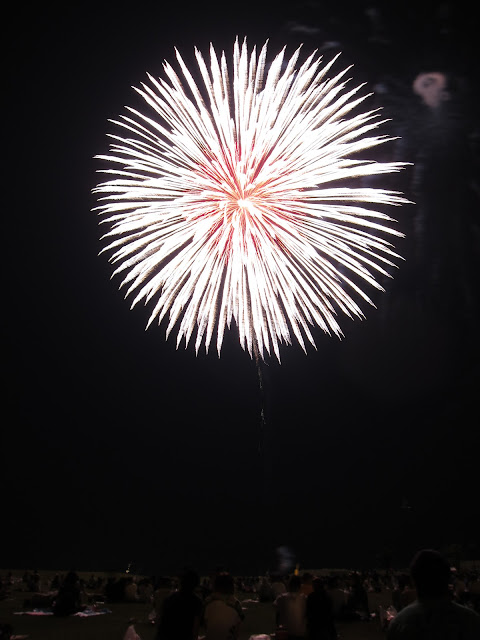 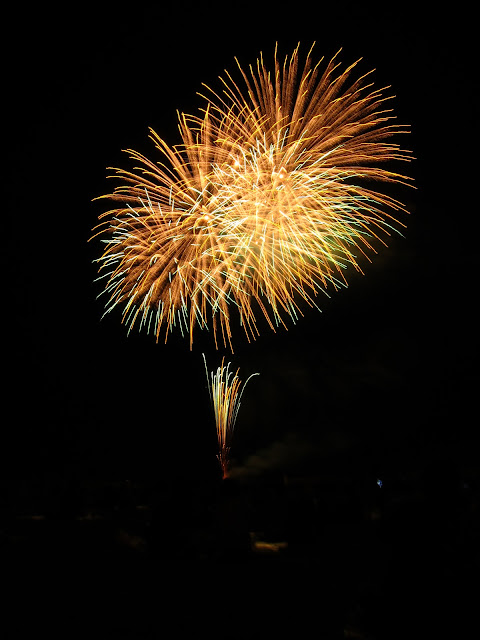 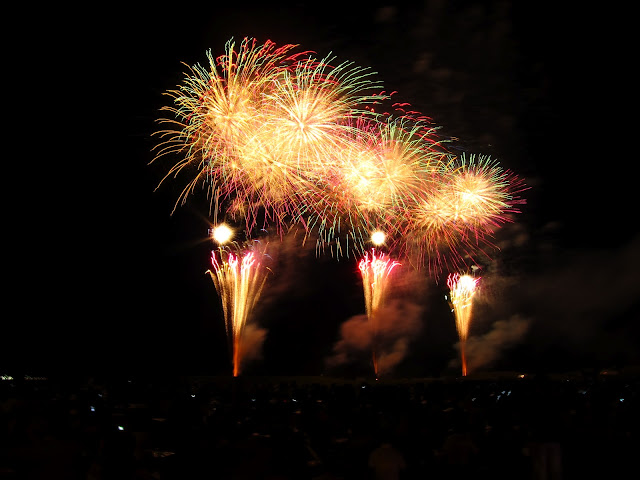 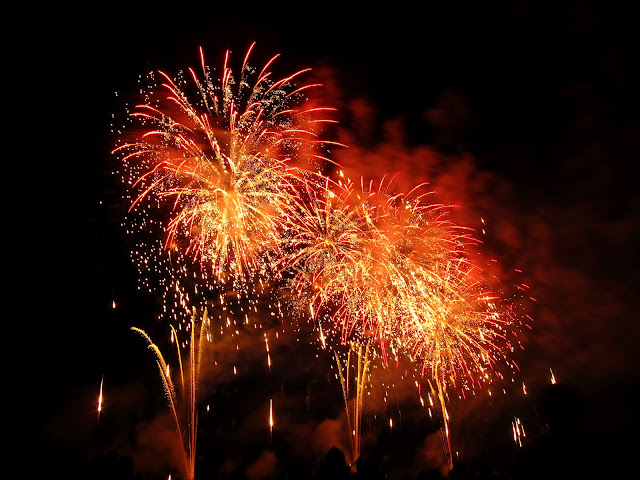 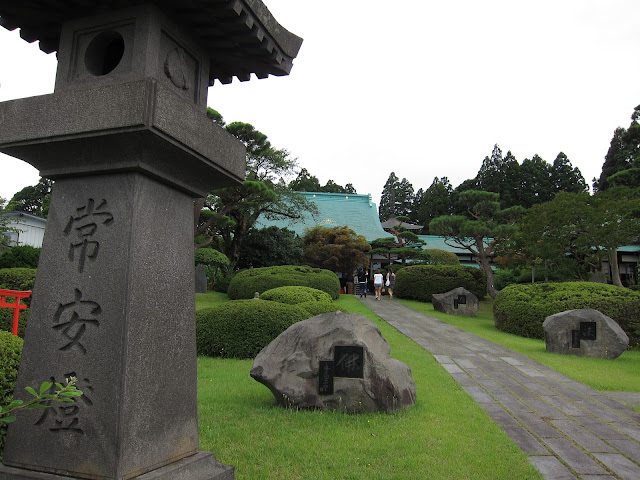 As I write this, I'm just back from a bus trip up the peninsula, which took Stephanie and me up to a fantastic Buddhist temple, Dairyūji (the caretaker was so charmed by my Japanese that she waived the entry fee; when she wasn't looking, I put it all back in a collection box in front of an image of Kannon) 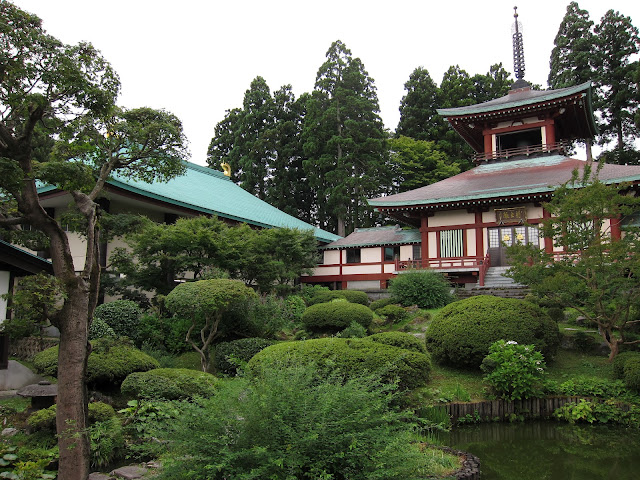 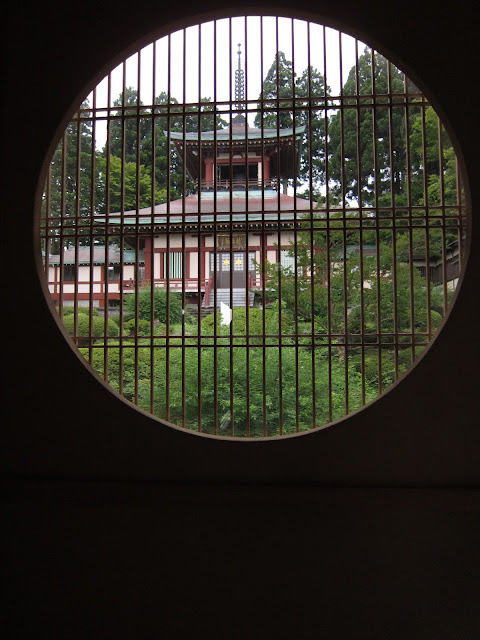 3As of July, the foreigner registration system has, at long last, been replaced with a more logical, unified regime-- one, that, for example, no longer requires certain gaijin-headed permanent-resident families to sign up for bank loans in the names of their own (Japanese) children. No word yet on how much holographic folderol is on the unified card, unfortunately.

4Of which there are now two copies, one maintained in a lockbox at the Board of Education in order to sign papers on my behalf. Regrettably, no one asked me if I already had one, and as a result, I will be no longer known as 蘭仁弐 for the purposes of banks and parcel services and instead be known only as DA VID (sic), inscribed in artless ALLCAPS.

5This I had extensively proofread by Kato-sensei, who functions during the school year as a Japanese language arts teacher. In the end, around 1/3 of my initial wording required rearrangement or replacement, but she was kind enough to describe the final result as <charming>. Whoa, I have a romantic foreign accent? If I can't sound natural, I guess I'll take what I can get!
6The effect was heightened immeasurably by the fact that, not only were all of the mortars on display car-alarm-wailingly huge, they were set off from a launch point only 50 meters from the audience, and fuzed to detonate at an altitude that, anywhere else, would have been considered irresponsibly low. In one earsplitting segment titled, literally, “Man Fireworks: The Spirit of the Namahage”, dozens of siege-mortar-sized projectiles were set off so close to the ground that sparks from individual shells could be seen bouncing off the berm from behind which the mortars were being set off. It sounded like World War III; for half a minute afterwards, the echoes could be heard rumbling off of the sea cliffs from miles away. Even in the “regular” segments, when the really big ones went off, you could feel it bouncing off the inside of your rib cage, and we were warned to promptly report to the first aid tent if we got hot ash in our eyes. Japanese cars are reliable, the trains run on time, and at a provincial fireworks festival, they put on an awesome, dangerous show that beats the Fourth of July like a rented mule. It rather puts one in mind of the 80s "OH NO THE JAPANESE WILL BEAT US ALL" mindset...
Posted by -D at 10:58 PM