As I prepare to teach my first lesson (appropriately, given the activities of the last few days, a self-introduction in English buttressed by a sheaf of glossy-photo visual aids) Kenny has told me that of all the lines in my speech, the one that'll get the largest reaction (his words: “Plenty of <'EEEEEEEEEEHHH?!'> s) will be when, among the other hobbies and experiences I've got good photos of (sailplane flight, martial arts, photography, and work as an emergency medical technician1), I let slip the gobsmackingly unmanly art of cooking as a favorite pastime. I suppose, even once having heard of my liberal Westerner's disdain for rigid gender roles, that the EEEEEEEHHHH's would be all the louder if I were to cop in class to finding doing housework in my 1LDK patch of earth somewhat soothing?

This is the long way around to saying that after two days of keeping up the bench-warming-and-introductions routine at the Board of Education, I woke up early on Saturday, fried myself up an egg, frybread, and tomato “not-full English” breakfast (I hadn't the presence of mind to look for baked beans at AMANO), and set about getting things shipshape with a surprising degree of vigor. By the time I looked up at the clock, it was 2:30 PM, and I'd laid up a week's supply of pack-for-lunch onigiri2 (salt-kombu stuffed, my favorite) in the freezer, done and hung a whole load of white laundry, wiped up the sinks, shower, and toilet, vacuumed and dusted, rearranged the kitchen, sharpened every knife in the house (including the dull-as-a-brick santoku that came with the apartment) into a cold-fire sheen of dwarf-smithen vorpal sharpness3, and done all the prepwork for dinner.
And with nothing else to do, and solar gain making the house just as warm inside as out, I decided I might as well seek out some cheap afternoon adventure. I settled on a walk in a direction I hadn't gone yet-- northward across the ricefields to the shores of the Hachirōgata Regulating Pond, the remains of a natural lake that had, until it had been dammed and infilled sometime in Japan's familiar mid-century period of enthusiasm for spendy infrastructure projects, been one of Japan's largest. My handy tax-survey map showed a walk of just over 4 km out to a pumping station on the south shore of Ōgata-mura, the island swath of reclaimed land that resulted.

And so, girded with water and a ￥80 apple, This Blogger set forth. 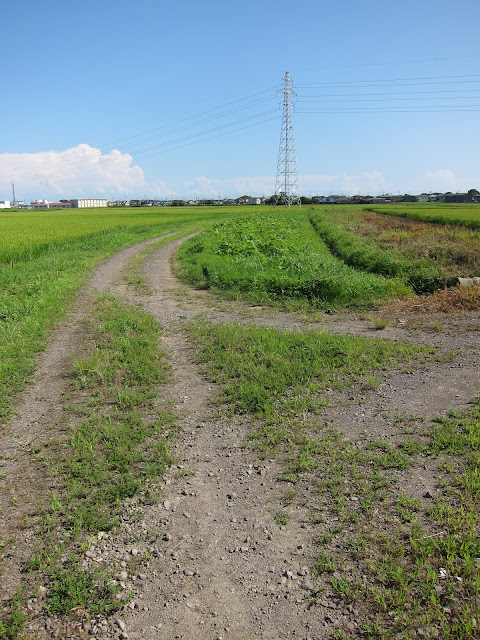 I jumped a drainage ditch that separated Green House from the paddies beyond and made my way up a service road, aiming for the water. Wind rustled through the rice, its heads growing yellow and heavy as the grain ripened, and summer grasshoppers bounced away from my feet and into the paddies, “splashing” into the stalks as they landed. 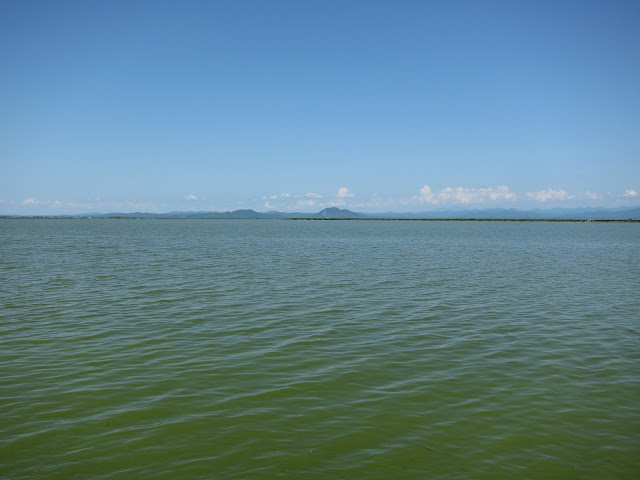 It only took a minute or two of walking to reach the shore. Climbing up a tall berm (helpfully paved when the lake was dammed), I stood on the rocky verge of the Regulating Pond, a flat expanse of suspiciously greenish water. In the distance, to the south, I could see the sea-gates that separated Hachirōgata from the Sea of Japan. 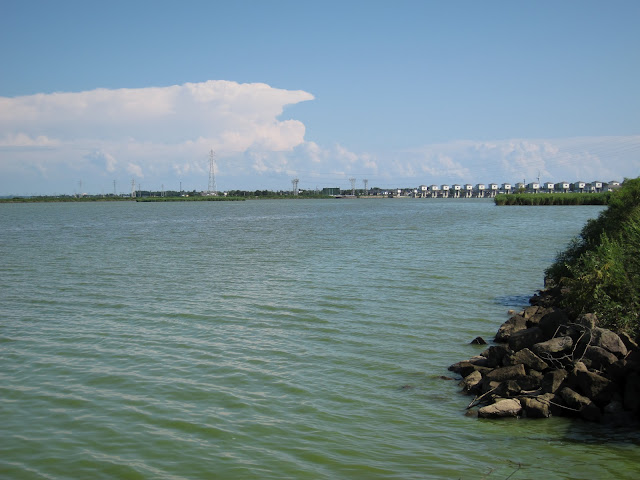 Here, too, unfortunately, Japan's somewhat uneasy (dare I say schizophrenic?) relationship with environmental protection was visible. Despite signs posted by the town forbidding littering every few hundred yards, I passed by the remains of dozens of discarded sushi containers, hundreds of coffee cans of varied vintage, a wrecked 1980s television, and (unless the mountain bears, apart from tasting different in these declining latter days, have also learned to use toilet paper) a mummified human turd. Judging by the tire tracks and garbage on this side of the dike, it looked like locals had been using the 3-meter berm as a privacy screen for all kinds of nightly beer-and-makeout-related activities. 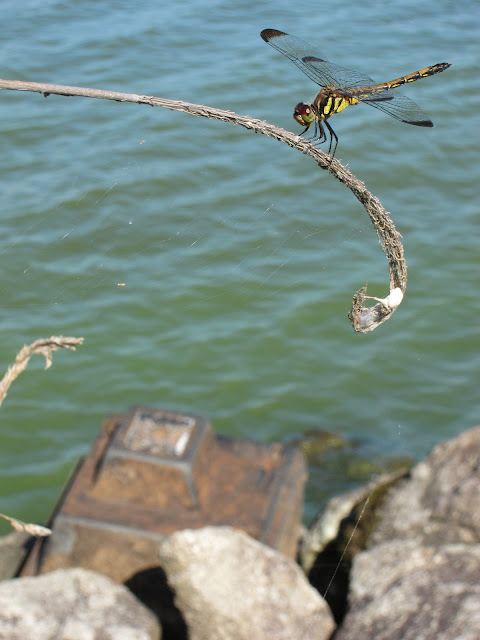 I walked northward along the overgrown verge of the lakeside road. Here and there, people had rigged slips along the side of the lake and pulled in small boats – all dubbed with auspicious names that sounded entirely too “big” for them (a dinghy named “Great Dragon”). Though my kanji knowledge starts to fall apart when it comes to parsing the names of vessels4, I was at least reasonably sure that none of them were bad jokes about beer or skinny-dipping. It seemed like an opportunity wasted. Someone had taken the opportunity to smash a CRT TV into bite-sized pieces and leave them in one of the Great Dragons, however. 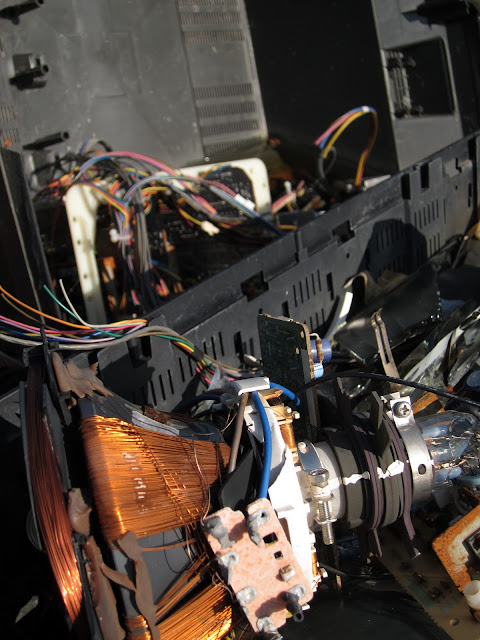 2 kilometers later, I found myself at the South Pumping Station, a large and ugly structure the size of a high school perched on piers above the Pond-- and equipped, as I knew it would be, with an informational plaque supplying me with unusually granular data about its precise water-moving capacity and date of construction. 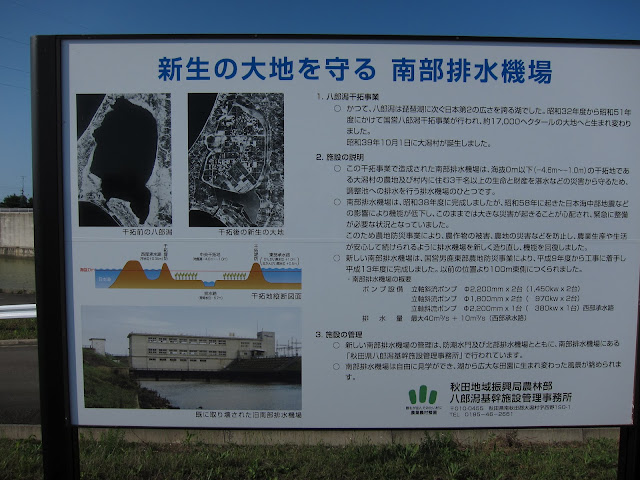 A motorcycle pulled up behind me as I was working my way through the plaque, and its rider, a fiftyish, deeply tanned fellow, hailed me and introduced himself as Akira. Was I here for the Harley ride-in? The Harley ride-in? I explained that I'd just walked all the way from Funakoshi, looking at the scenery along the way. All the way from Funakoshi? Was I then a fan of nature? Akira handed me his card, emblazoned with a color photo of a taiga goose. It seemed he ran an environmental-protection and bird-watching volunteer group in the mountains nearby-- but this weekend he was in Ogata for the 10th annual Harley meetup in the flats nearby. It reminded him of the months he'd spent in California in the 80's, investigating local conservation programs, he said.

I was working on getting out <A Harley meetup in Japan seems a far cry from California in the 80's> when, at that very moment, what but a lifted Dodge dual-wheel pickup truck roared by us and over the pumphouse breakwater in a cloud of diesel smoke. Flying from its bumper were two immense American flags. As I was processing this sight, the massive vehicle pulled suddenly to a stop 20 meters away from us. The imposing Dodge's driver's door-- just like a real American car, on the left side-- opened, and its driver, a short Japanese man wearing a full Western getup-- jeans, a cowboy shirt, silver bolo tie, and 10-gallon hat-- stepped out onto the chrome running boards of his vast machine to peer disapprovingly at the larboard flagpole. Stepping down to ground level, he circled the truck, reaching up to preen the flags back into what must have been a more satisfactory flight condition. And abruptly, the monstrous roadyacht roared back to life and was gone. <There's plenty of people who'd love to try their English on you down there>, said Akira. <It's all Greek to me, of course... but if you're walking all the way to Funakoshi, I suppose you'd better hurry back before it gets dark. Why not get a bike? Maybe even a Harley?> <Maybe sometime, I guess.> It feels too American-- and somehow, maybe even too Japanese, I thought, as I jogged home among the ricefields.
1My brother took most of the volunteer fire department snaps, and was even kind enough to supply a degree of Leni Riefenstahl heroic upward angle to several of them. I hope the kids can recognize me, what with the uniform and all of the in-camera hero-of-industry bearing.
2You may know these as rice balls, or if you hail from Hawaii, as “musubi”, originally a southern Japanese term that reflects the Kyūshu and Shikoku origin of many of the Japanese who settled there. Why not PBJ, you ask? Japanese bread is ungodly expensive (costs more than 2 pineapples up here), comes only in “white” or “pay more for very light rye”, and is known to occasionally be, not bread at all, but suicidal bread robots. PBJ is a weekend treat around here at Green House A.
3In the process requiring me to tidy up the kitchen again, since, with room to swing and no one to see me, I decided to check my work using Saladin's old party trick of slashing in twain silk scarves thrown in the air. Except it was a discarded grocery bag. And obviously not Saladin but me in shorts and sockfeet. Try it at home sometime, single people! It's almost as much fun as drinking cold beer in the shower. And given the right technique and a good sharp edge, the bag won't even move when you hit it. Saladin was lucky though; he didn't have to pick all those pieces of veil out from under the fridge.
4The Marine Self-Defense Forces, gratifyingly, write their ships' names in easy-to-parse (although somewhat girly) hiragana, which is fun-- JMSDF ship names are all piss-and-vinegar leftovers from the period when it was an Imperial Navy, you could call a carrier a carrier, and not even the Coast Guard would have dreamed of wearing drag and dancing to bubblegum pop over the tannoy.
Posted by -D at 8:06 PM