The less that's said about international plane travel, the better, as far as I'm concerned. It's got to be the most expensive, least-fun activity ever devised. I'll spare you the usual rant about baggage fees, the long lines and senseless martinetism of the security process, and the mysterious processes by which airline food is converted into a substance about which the best that can be said is that, like iodine-131, it is  largely non-poisonous as long as one's dosage is kept to a minimum. Nor will I unwind on the way in which the mind becomes progressively unwound as the body jets from time-zone to time-zone.  Instead, I will share with you a thought that sprang unbidden to my mind as I attempted to make myself comfortable against the shuttered Lexan porthole as we hung in midair somewhere over Kamchatka:

If there is a Hell, it is probably only accessible by a 13-hour plane ride.

So, of course, when I got off the plane to find myself in Narita Airport instead of Hades, my day could only get better, and I was pleasantly surprised when, to a large extent, it did.

I feel I'm now in the position to make four remarks:

First-- Japan does make an immediate impression. Everything really is as on time as everyone says, and the politeness with which all business transactions are conducted comes as a faintly surreal relief after the unmitigated psychic violence of long-distance air travel. Boarding a shuttlebus that not only arrives on time, but is bowed in and out of its parking space by white-gloved attendants feels unbelievably right after hours of stale food and recycled air.

Second: These other current stereotypes of Japan are at least partially true: Some of the toilets are robotic. (Google "washlet".) Hotel rooms are small. (This is the view from the door of mine.) 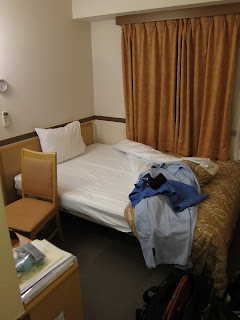 Convenience stores are everywhere. Food in convenience stores is surprisingly edible. There are a surprisingly large number of canned coffee options. Narita Airport's elevators announce floors in a chirpy, girlish lilt.  Its escalators do the same. Most everyone seems surprised and pleased if you are able to do business in Japanese, as I was for the most part.

Third: Canned coffee is recognizably coffee-based, but is not, by any equitable standard, particularly delicious. Garbage cans are strangely scarce. Those people not employed by service industries are polite and helpful, but, (as one would expect), not falling over themselves to chat with haggard-looking foreigners.

Fourth: Small signs of the quake are everywhere-- half of the silver-tongued elevators in Narita are closed to save energy in a post-quake voluntary rationing policy, and my hotel has no hot water before 6.  Many of the conversations I overheard concerned themselves in one way or another with the earthquake and its aftermath.

More later; I need to attend to my circadian rhythm.