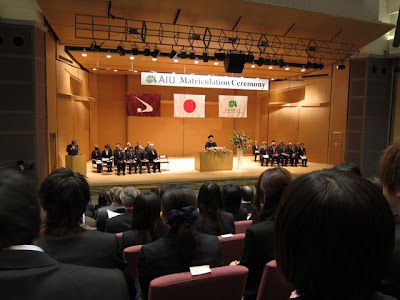 Well, it's official now: I really am enrolled at AIU. Orientation ended this morning with the Matriculation Ceremony, an event of no small consequence, judging by the dress code (formal but for the majority of the international students, who apparently missed the repeated memos, and so showed up, for the most part, in jeans and sneakers), the event's coverage on local and regional TV, and the protracted speechifying in English and Japanese that made up the majority of the ceremony itself.

Flanked on either side by bleachers loaded with camera-toting parents, I, along with the entire entering class, was ushered into the auditorium to be ritually role-called individually by the university President and the Dean, each student being expected to rise from their place, and bowing, respond with a "Yes!"-- in English of course, this being an international university, and all. This done, we were subjected to a series of speeches, most, fortunately, in Japanese, from no less than university President, the Vice-governor of the prefecture, and the speaker of the prefectural assembly, through which we patiently sat before being released to do what we were actually at the ceremony for-- to take pictures of each other.


I can't remember how many group photos I took over the next hour. Certainly I can't recall all the names of the folks I took them with, which is going to get very embarrassing in short order. My concerted efforts to meet as many new students as possible around here has long since overwhelmed my already weak capacity for remembering names. Eventually I'm going to make some enemies if I keep having cordial chats with people and then asking them their names at the end of the conversation.


At some point, we were ushered back into the cafeteria for the New Student Reception, an event that, in a burst of international flair that may or may not have been entirely deliberate, featured for lunch a bill of fare that included at once the local delicacy kirtampo-nabe (a roasted mochi rice-dumpling floating in a cilantro-y chicken soup with cress), sponge cake, fried chicken, chocolate fondue, gyoza, takoyaki, and pizza. All the while, to my surprise, the speeches continued, from various members of the class, before I, too, was called up to say a few words on behalf of the new exchange students.

Given, as I was, only an occasion and the instructions to "mix in some Japanese because it sounds cool", I was pretty satisfied with the result of my modest oration-- I got solid attention and applause, and am so far still fielding compliments on its content.


皆さん、こんにちは、ランジーニ・デビドと申します。<Hello everyone, I'm David Ranzini.>
On behalf of the rest of the new foreign exchange students, I'd like to say how truly glad we all are to be here at Akita International University-- a happiness that, for all of us, is tempered with regret that not all of us who were planning to be here are with us today, and with the thought of others, elsewhere in Japan, who today are facing great hardship, even as we here begin this exciting journey together.
We're all from different countries, and different backgrounds, and we all have different reasons for coming here-- but all of us, I think, fundamentally intend to do some of the same things: to make friends, to learn about other cultures, about each other, and about ourselves. All of these are, of course, the kind of life-long goals that one never really can call “finished”, but in the brief time we've had together, I can already see how far we've come. We've grown from a collection of individuals brought here from a dozen countries to a community of friends from around the world. We've already learned so much about each other's countries, cultures and languages. And we're well on the way to making more important discoveries still.
I think there's something very true in the saying that it is in the faces of others that we see ourselves most clearly, and I hope that each and every one of us will be able to have such an experience here at AIU-- a meeting with students from outside our own nations or cultures that help us all to develop in our own right as true 国際人ーーcitizens of the world.
I hope that, with that spirit in mind, we can all work together towards a fun and productive semester here at AIU. 皆一緒にがんばりましょう！よろしくお願いします。<Let's work hard together! I hope that we'll all get along!>

The semester kicks in in earnest on the 25th. I suppose then we'll see how exciting that "journey" really is going to be.
Posted by -D at 10:36 AM