It's been a busy 24 hours over here, made longer by how early I started the day. This will probably be a long two-parter multi part post.

I rolled out of an uneasy sleep at two in the morning local time at the promptings of The Jet Lag Demons. The much-publicized electricity-saving measures in the Tokyo area don't seem to have had much effect on the cyberpunk skyglow of the city. From my window, the sky over the port was the color of television, tuned to a dead channel. 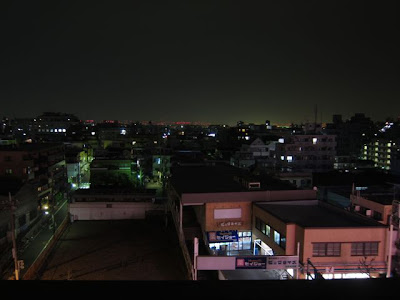 Staring at the sides of the room got boring, so I tried the TV.  Foreign commentators love Japanese late-night television, which must be responsible for half of Youtube's "Weird Japanese TV" themed videos. Well past the hour when practically anyone other than jet-lagged foreigners, insomniacs, and obsessive anime fanboys can be expected to be watching TV, it's a weird blend of low-budget reruns, shopping TV and stuff that's considered too non-family friendly to show when kids are awake. I scrolled past half a dozen shopping infomercials and several 'zany' celebrity talk-variety shows before finding myself watching the premiere episode of a new anime series which, as far as I could determine, concerned the adventures of an  student as he packed up his backpack with his textbooks, lunchbox,  gun and butterfly knife on the way to his first day at what surely must have been the world's premiere private high school for young secret agents. Secret agents apparently still have to bike to school, which has some disadvantages when an unknown organization attempts to kidnap or kill you using (no lie) remote-controlled robot Segways with Uzis attached to their handlebars. (If only he had chosen a mode of transport capable of going faster than 12 miles an hour.)
TV did the trick for sleepiness, in the end. By the time our hero was rescued by one of his sharp-tongued, quick-drawing classmates, whose ability in wielding concealed handguns was matched by her equally astonishing inability to sit in a skirt without revealing her underwear, I had grown tired enough to finally doze off.
I woke again to find the NHK equivalent of the Today show running wall-to-wall coverage of the earthquake aftermath, including coverage of official shelter visits from the Crown Prince, the announcement of an official government compensation plan for victims, a worried update on the level of radiation in the water trapped in the Fukushima reactors, and an unbelievably depressing profile piece on a 8th-grader from Miyagi Prefecture whose courageous attempt to be happy in order to fulfill her father's last New Year's wish was literally heartbreaking. More dark news came in the form of a studio interview with a seismologist who enumerated the hundreds of continuing aftershocks Japan-wide before predicting more earthquakes in the next few days. 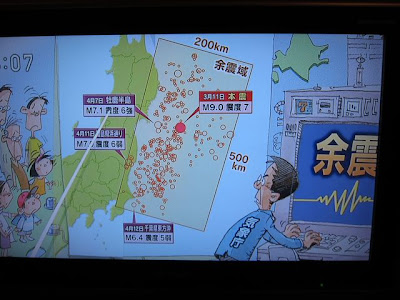 Coming down for breakfast (rice, miso soup, cold potato salad, pickled lotus roots with sesame seeds, astringent preserved ume plums and coffee) was a relief. Outside the breakfast bar, uniform-clad middle-schoolers trundled off to school in groups of twos and threes, and salarymen stopped at the canned coffee machines to get their morning cups of joe. I wandered off after breakfast to walk around the district, following signs to the Haneda Library into a residential neighborhood of quiet, close-spaced houses, before walking back to the main road, where by chance I found myself in front of the SEGA video-game company's headquarters.  It was only once I was on the airport shuttle-bus that I realized I'd forgotten my camera.
Looking for the option that contained the least (identifiable) meat, I bought a bento lunchbox that billed itself as a "30 Item Balance Lunch", (deciding to take as a good sign that I couldn't read the names of at least 24 of its ingredients) and a bottle of a surprisingly excellent sports drink called Pocari Sweat in the airport, and sat down to wait with a bargain-bin copy of Carl Sagan's Cosmos.
By the time the plane arrived, Sagan was rattling on about the wonders of Mars, and I was wondering what species of small bird had laid the delicate hard-boiled egg I'd just popped in my mouth, feeling excited and nervous and sleepy at the same time. 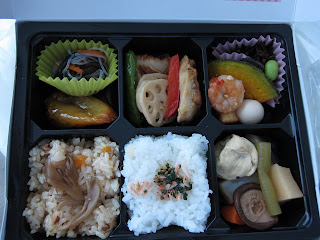