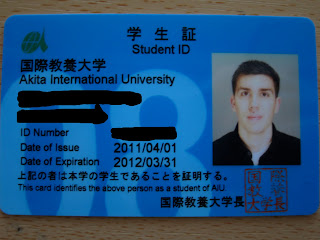 I'll start this post off with another lame institution of the blog: apologizing for not posting more frequently. The last 3 days have had no shortage of interesting events, about all of which I intend, in short order, to tell you-- only they've come as bursts of free time in between various events in the New Student Orientation process, which consists of long stretches of receiving and signing papers, listening to long, admonishing speeches on sex ed (in which I learned the kanji for a variety of unpleasant sexually transmitted diseases), fire-prevention, culture shock, and earthquake evacuation, the last of these accompanied by a terrifying video on Great Japanese Disasters Through History being overcome by Careful Planning and Community Involvement, with bonus harrowing footage of emergency surgery being done on the floors of gymnasium evacuation centers, and pajama-clad civilians forming amateur bucket brigades and hose teams to battle blazes in the aftermath of the Kobe Earthquake. I was mildly amazed to see my Japanese seatmates dozing off through the scenes of disaster--  I was riveted. Along the way I also discovered firsthand that school fire safety training in Japan involves live-fire exercises involving real extinguishers and pools of gasoline. I'm not a keepsakey person, but since I was woken the other night by my first earthquake, a magnitude 3.0 that felt like light chop on the ocean, but accompanied by an ominous, subliminal rumble, I figure that keeping the discharge safety pin from "my" extinguisher might not be bad for luck.

A last reason for my silence, at least today-- I've been asked, as one of the better-looking and better-spoken (yes really) exchange students by the administration to give a brief speech after tomorrow's New Student Entrance Ceremony. I'm to keep the English relatively simple, and mix in some Japanese,  "since it'll be cooler that way". (Bonus fun: The office staff who watched me attempt to politely prevaricate before giving in to doing the thing said that I tried to worm my way out of the unpleasant request just as if I had been Japanese. A compliment to my cultural competency or something, I guess...?)

If the speech ends up in a fit state for reading, I'll post it when it's done. In the meantime, here is one of my classmates going berserk on a puddle of gas-- no one was there with a camera for when it was my turn, unfortunately. 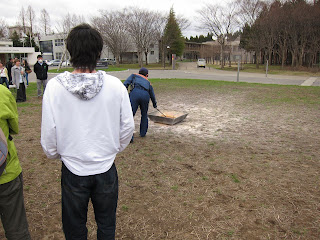 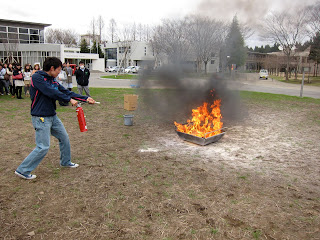 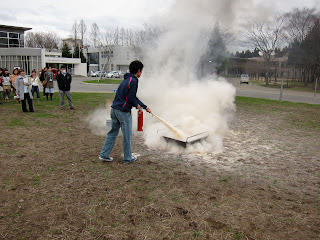